I then looked into the mirror to see if I might see the reflection of something other than myself. Nope, nothing but me. Then I touched the mirror on the lower corner, holding it to the wall, before slowly taking my finger off. The rocking stopped. Before going to the shower, I looked at the mirror and said out loud, with a smile on my face, “What’s the matter, are you tired of playing?” The mirror went, click, click and stopped.

Over the next few months, I had several more opportunities to stay at the St. James. In fact, I would plan my trips so that the Cimarron area would be my last stop and always stayed in the Zane Gray room. However, nothing more happened until what turned out to be my last stay there.

Just down the hall from my room is another small circular room with a poker table. I always thought it would be great fun to play poker there but never had the chance.

On that night, I had gone to bed early, having to be in Colorado the next morning and needing to get an early start in order to get back to my home in Rio Rancho, New Mexico the next night. 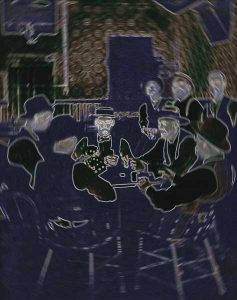 However, I was having trouble getting to sleep and as I tossed and turned, I began to hear the sounds of people talking down the hall.  It was odd, as I was the only guest in the hotel that night. As I listened to the voices, it sounded as if they were calling poker games, such as “Jokers Wild,” or “Jacks or Better to Open.”

Curious, I got up, pulled on my pants, opened the door and looked down the hall.  There, in the corridor was a lady in a bright red, ruffled, 19th century period dress. Looking a little annoyed, she was holding a round serving tray. I went back in my room, thinking this might be my chance to play a little cards in the circular room I had always wondered about. I put on a shirt, went back out, and walked down the hallway to the poker room. When I poked my head in, three men, all in period dress, were playing poker. One of them asked me if I wanted to get in, to which I responded: “What are the stakes?”

Unfortunately, all I had with me was a $20 bill and a company credit card. Having to decline, I went back to my room and went to sleep. (For those of you who do not play poker, the “ante” is the price to get into the game. I would have needed more in order to bet.)

When I got up about 5:30 a.m., I got my stuff together and as I walked down the hall I looked in the poker room. It was spotless — no empty bottles, no cigarette butts, not even a dirty glass. I then went downstairs to the front desk to check out and asked the desk clerk, “Were there any big winners last night?”

“What do you mean?” she replied.

Shaking her head, she said, “Mr. Jenkins, I’ve been here all night and you were the only one upstairs.”

I just stood there speechless. Feeling as though I had just been hit over the head, I then simply walked away, left the hotel, and have never had the opportunity to return.

I was absolutely sure that those people that I had seen the night before had been part of some kind of show or had been to a square dance or something, because of their dress. They seemed so much like “flesh and blood” people. But the desk clerk had said I was there alone and their no one is allowed upstairs at night unless they are guests of the hotel.

I don’t know what I experienced, but I wish I had stayed a while longer and talked to “them” more.  Like so many other experiences that we have on a daily basis, I berated myself later for not having asked the men their names. What would have happened if I had asked them to leave? Would they have simply disappeared? Of course, I wouldn’t have asked them to leave — I truly thought they were “real” when I saw them.

As I write this, the hair on my arms is standing up. It’s a funny thing, I remember so much of that encounter as if it happened just yesterday. On the other hand, there are so many details that have totally escaped me. I compare my experience to a chance meeting of someone that you respect and look up to and not recognize them — only to find out later who they were. There are so many things I wish I would have said and done. If only I had …………

I don’t do drugs and I don’t drink. Nothing quite like this has happened to me before — except when I was seven, but that’s another story. ~SMILE~

Ghost Hunters at the St. James 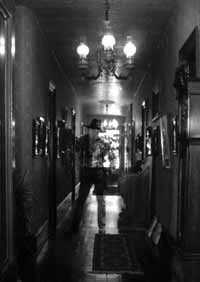 As ghost hunters, we were excited to stay in the second most haunted room of the St. James Hotel. The most haunted room, as told on the Unsolved Mysteries TV series, has been sealed for the protection of hotel employees and guests. The ghostly inhabitant still makes claim to owning the hotel as he won it in an Old West poker game on the very same night he was murdered in room 18. This hotel is full of Old West history, having guests such as Jesse James and Doc Holliday. We walked about the hotel using our EMF meters and found some strange readings. We also gathered some strange sounds from room 18 (the sealed room) which we are still analyzing.

As I was falling asleep I felt a tender touch on my back and then noticed that my wife was not lying near enough to have touched me. When I inquired if she had just touched me…she had not! Immediately after, she was startled by invisible fingers gliding over her hand.

Finally, we slept, until 3:00 a.m. when we were awakened by a strange scream coming from inside our room, the Mary Lambert room. I began taking photographs, one of which contained a vortex. Vortexes are funnels of energy that are associated with ghostly activity.

The strangest phenomenon was a picture I had taken of the second-story window. There is a face in the window…not a reflection, not someone looking in. A ghostly face staring back as I was walking past the forbidden room 18.

Even if you are not a ghost hunter, the history, the wonderful staff, and the great food makes St. James Hotel a wonderful vacation spot.

Submitted by Rick Smithson, May 2005 – Rick is a certified ghost hunter and member of the International Ghost Hunters Society.