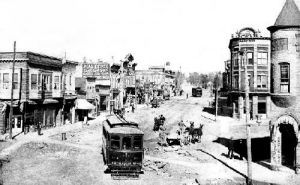 Without exception there was no town which harbored a more disreputable gang of desperadoes, and outlaws than did Las Vegas

Las Vegas was established by a Mexican land grant in 1835. Originally called Nuestra Senora de los Dolores de Las Vegas Grandes (our Lady of Sorrows of the Great Meadows) by settlers whose roots in the area went back to the early 1600’s, in the beginning, the settlement doubled as a fort, designed to be battened down for attacks by the Apache Indians. One-story adobe houses circled a large, central plaza where stock could be driven to safety.

By that time, the Santa Fe Trail was being traveled frequently, allowing entrepreneurs to send their wares westward while enterprising Las Vegans traded eastward. For the travelers along this rustic path, Las Vegas was a welcome site, as it was the first town of any size after 600 miles of travel from Kansas. These many traders, along with other pioneers and prospectors, demanded whiskey and women, for which the town readily complied.

The Santa Fe Trail offered jobs and the many town merchants prospered during this time, growing to over 1,000 people by 1860. During the next two decades its population quadrupled as it established itself as a major trade center. 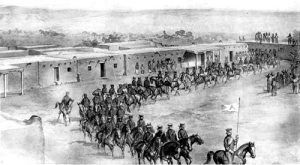 It was in the summer of 1879 that Doc Holliday rode into Las Vegas, where he hung out his shingle for the last time. However, this idea was short lived, and only a few weeks later he bought a saloon on Center Street. His partner and financial backer, John Joshua Webb, once a Dodge City lawman, was by then a part of the notorious Dodge City Gang.

On July 19, 1879 Doc got into an argument with a local gunman, named Mike Gordon, who was rather popular with the locals. The two took the argument to the street where Doc politely invited Gordon to start shooting whenever he felt like it. Gordon obviously accepted this invitation and wound up dead, laying in the dusty street with three shots in his belly.

Townspeople soon tired of the escapades of the lawless people of their city and took matters in their own hands. The Las Vegas Optic on April 8, 1880 posted this notice: