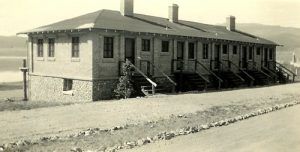 The Guest Annex, built later, at first appeared to us to have stables underneath. Instead, we found out that the lower level initially served as a bunkhouse. Photo courtesy Ann Tyer Walker.

When Bill Tyer recovered from his surgery, he and Hazel resumed the running of the lodge. Two years later when Bill was 58 and his wife Hazel was 38, they gave birth to their only child, Ann, in 1942. Though Bill and Hazel had a fine time living and working at the lodge, just two years after Ann’s birth they returned to Bill’s home in Ardmore, Oklahoma to be closer to his family. Though Hazel loved it at the lodge, she felt the area was too remote and the winters too severe to live there with a toddler.

The lodge was then utilized by Walter, his wife Eva, and their four children as a vacation resort for many years. Though all of the family continued to visit, Walter’s grandson, Dale has told us he stayed at the lodge every summer for two months from 1951 until 1961 when he went off to college. When Eva died in 1953, Walter remarried a woman named Mamie and the couple continued to utilize the lodge as a vacation home, along with the rest of the family members. As Walter Gant’s children and grandchildren enjoyed the lodge and its scenic amenities, no strong drink or gambling was condoned. In fact, according to family members, the lodge was never utilized as a gambling casino, despite the many rumors to the contrary.

During these years, Walter’s son Jack and his wife Evelyn became friends with other prominent family members of the Moreno Valley including Tal and Jannine Neal and the Gallaghers.

From the 1950s until his death in the late 1970s, another one of Walter’s sons lived at the lodge off and on. Afterwards, another of Walter’s grandsons lived there for several years. Before long, the lodge soon fell into disrepair. The property and the surrounding land was put up for sale; however due to the condition of the lodge and potential renovation or demolition costs, the property sat vacant for years.

As the old buildings sat idle, continuing to deteriorate, vandals and vagrants made use of the place, further reducing its beauty and damaging the structures. 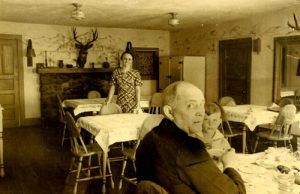 The restaurant at the lodge. Supposedly, vagrants have sometimes made their home in the old hotel, and as you can see it is filled with trash. Photo by Kathy Weiser, July, 2003.

Because of their long family history and love of the area, Walter’s daughter-in-law Evelyn Gant and her son Dale built a beautiful chalet on the west side of the lake that was completed in December, 2004. The Gant family continues to enjoy the area in their new vacation home as they reminisce about the days of the old lodge and the many happy times enjoyed by the family on this beautiful part of the lake.

Evelyn assures us that the Gant family history in Eagle Nest is a long way from over, as a whole new generation continues to visit the new chalet called the “Dream Catcher.”

Though the lodge was scheduled for demolition in 2005, it was saved, at least temporarily, by a new buyer. When Legends of America re-visited Eagle Nest in 2008, we learned it had been purchased by a man from Hawaii, and though local talk said he might renovate the old hotel, nothing was done, other than the stables being demolished. Then, the land (substantial acreage) was subdivided into three parcels, and once again been placed for sale on the market. 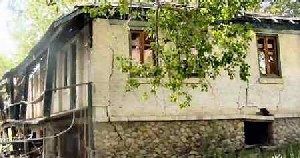 This building appears to have housed stables on the lower level, with rooms above. Kathy Weiser, July, 2003 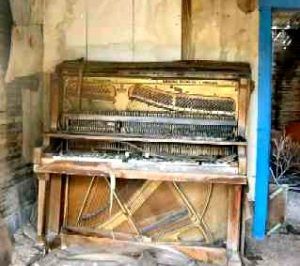 When we checked on it via Google Satellite images in 2018, the old lodge still appears to sit, deteriorated to such a degree that it is doubtful that anyone could truly restore the old place — it would have to virtually be rebuilt. From what we can tell it is not currently for sale.

A big thanks to Doug and Ann Walker, Ann’s cousin Shelton Tyer, Jr., Evelyn Gant, and Dale Gant for their contributions in solving the mystery and setting the record straight on this beautiful old place on the lake. The abandoned Eagle Nest Lodge sits off Highway 64 as you reach the lake coming in from Cimarron.

Idlewild and the Klondyke Mine

9 thoughts on “The Mystery of Eagle Nest Lodge”