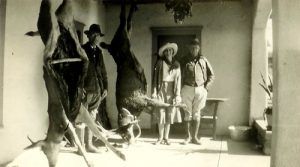 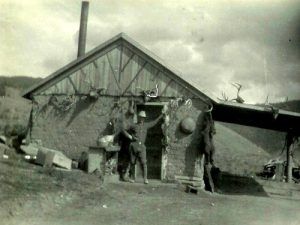 When Tyer arrived in Eagle Nest in 1927, he lived in a cabin on the property and began hiring construction people. As the construction of the lodge began, he oversaw the many details of building what would soon become Eagle Nest’s first luxury resort. The marvelous old doors at the lodge were completely made by hand in Oklahoma City by Walter’s father and carried to Eagle Nest in a Cord touring car, one door at a time. 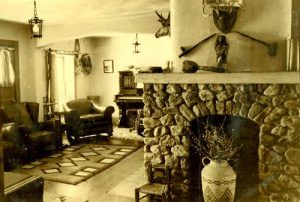 The lounge with three-sided fireplace. Another side faced the chairs above, the third side faced a bar in the adjoining room. Photograph courtesy Ann Tyer Walker

When it was completed the Eagle Nest Lodge included the main building that featured a large lounge where guests could sit and relax on one side of a three-sided fireplace, or have a drink at a large round wooden bar on another side of the stone hearth. Across from the lounge was a restaurant and coffee shop where home cooking was served up to the many guests of the lodge.

Upstairs, the main building provided 12 rooms for weary travelers. Next to the main building was the Casa Loma (House on the Hill), which provided even more rooms for the lodge, considered large for its time. In front of the lodge was a large ornamental fish pond and near the lodge — stables and a corral. Beyond the Casa Loma Building was the Caretaker’s House where Mr. Tyer lived. Featuring fishing and hunting expeditions, as well as horse-back riding, the guests had many amenities to entertain them.

As the popularity of the Eagle Nest Lodge increased, the lodge added a guest annex across from the lodge that provided five studio units with their own bathrooms, kitchenettes and what appears now to be garages or stables beneath the rooms, on the lower level. Along the back of the annex, sat a wide deck where the guests could sit and leisurely view the lake before them.

They also connected the main building to the Casa Loma via a walkway/lounge they called the Loafer’s Lounge.

Soon after the lodge opened, Bill Tyer’s nephew Shelton Tyer, Jr. from Ardmore, Oklahoma, began to spend summers with his uncle. “Uncle Buddy,” as the family called him, soon put young Shelton to work “earning his keep.” Though Shelton has nothing but fond memories of his uncle and the Eagle Nest Lodge, he laughs when he talks about how hard his uncle made him work, as the young man was not used to such strenuous labor. Working from sun-up to sun-down doing all manner of chores, from bell hopping, to washing dishes, to wrangling the horses, “Uncle Buddy” kept him busy.

Of his uncle, Shelton says that, though Bill Tyer had him working hard, he was also a great teacher, making sure that the chores were performed correctly. Shelton also has great memories of horseback riding, fishing and hiking while spending summers at the lodge. 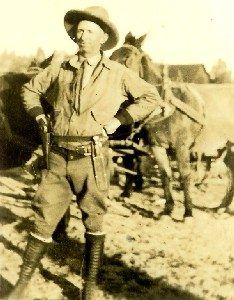 Shelton lived in the “bunkhouse” on the lower level of the Guest Annex, which they called the “Apartment Building” at the time. It is this area that appears that it was later used as garages or stables. Upstairs there were five apartments for additional guests. One of his many jobs was to keep the heater going in the Guest Annex building. Besides serving as a bunkhouse, other areas of the lower level were utilized for storage for ice, coal and various supplies for the lodge.

In the early 1930’s Bill Tyer met a woman named Hazel Kay who had come out from Colorado City, Texas one summer to visit her sister in Ute Park. Through the grapevine, Tyer had heard that Hazel was in the area, and when a waitress quit suddenly, he contacted Hazel’s sister to see if Hazel might be interested in working for a couple of weeks. As an additional incentive, Bill told Hazel that working at the lodge would be a good place to meet single wealthy oilmen from Oklahoma. Hazel accepted and filled in for a couple of weeks as a waitress. In fact, she enjoyed working at the lodge so much, that she hired on again the next summer. Long story short, Hazel didn’t fall in love with a rich oilman from Oklahoma — she fell in love with Bill Tyer. In April, 1934 the couple drove to Belen, New Mexico to get married. After their return to the lodge, the newlyweds operated the resort together for many years. Entertaining the many guests of the lodge, they were also often visited by the lodge’s owner, Walter Gant and his wife Evah, for fishing and hunting expeditions.

In August of 1940, Walter Gant’s son Jack, along with his wife Evelyn ran the lodge when Bill Tyer had surgery and Hazel wanted to join him. At that time, the guests included Dr. Gilbert Hovey Grosvenor, editor of the National Geographic Magazine, and his wife Elsie Bell Grosvenor. Elsie was the daughter of Alexander Graham Bell, the inventor of the telephone. The couple became friends with the Grosvenors and stayed with them in their home in Bethesda, Maryland when Jack was stationed there during World War II.

9 thoughts on “The Mystery of Eagle Nest Lodge”