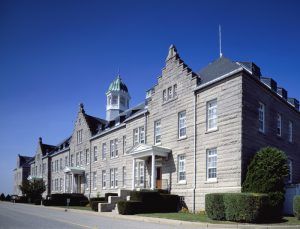 By the third quarter of the 19th century, civic improvements were undertaken by the town and by wealthy philanthropists, including the construction of fire stations, the Cutting Memorial Chapel and the Mary Street YMCA. The convergence of the wealthy summer residents, the military, and town needs are illustrated in the Army and Navy YMCA of 1911. Given by a noted Cincinnati philanthropist in honor of her two sons and designed by a New York architect, the large building prominently located on Washington Square served as a haven for soldiers and sailors on leave. The Beaux Arts building now serves as low-income housing and is listed on the National Register of Historic Places.

Newport’s colonial houses, considered old and unfashionable for decades, had begun to receive attention around the nation’s Centennial celebration in 1876. The rich assemblage offered numerous design sources for the emerging Colonial Revival style, and the district’s houses played a major part in its development.

Washington Square retained its key governmental role, which had diminished when City Hall was moved to Broadway, with the erection of Newport County Court House in 1926. The courthouse was the last major building erected within the district. Newport center fell into decline in the 1930s as the town’s economy stalled, the building boom ended, the waterfront mills closed, seaport activity halted, and the number of summer visitors dwindled. 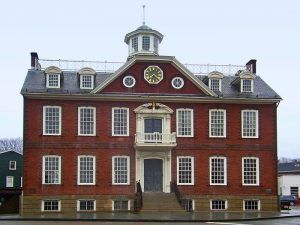 The major changes within the district in the 20th century were associated with highway projects and urban renewal from the 1950s through the 1970s and are concentrated along Thames Street and Broadway. The waterfront and wharf areas west of Thames Street and south of Marsh Street are excluded from the district due to demolition and relocation of historic buildings, the construction of new buildings, and the construction of America’s Cup Boulevard. While the impact of these activities is undeniable, the effects are concentrated near the district’s edges and modern intrusions within the district are few. Substantial numbers of buildings in the waterfront areas and throughout the district have been restored through the efforts of private individuals, organizations, and the city government.

Today, the Newport National Historic Landmark District is a dense, waterfront urban concentration of over 1,400 residential, commercial, institutional, and public buildings constructed between the 1670s and the early 20th century. Of these, there are 1332 buildings, structures, and sites which contribute to its historic and architectural significance as a colonial seaport and 19th and early 20th-century resort community. Washington Square, formerly known as the Mall or Parade, is the geographic and symbolic center, the heart of early settlement, civic, and mercantile activities and the pivotal hub linking the district’s neighborhoods.

The district’s character is that of a highly distinctive and well preserved colonial city with an overlay of later 19th through early 20th-century development. The colonial seaport city is defined by an outstanding collection of nearly 300 surviving 17th and 18th-century buildings and by an irregular grid pattern of streets which was established in the 18th century. The presence of several hundred 19th-century buildings attests to the city’s new era of growth as a summer resort and naval operations center from about 1840 into the early 20th century, when infill construction occurred in conjunction with the erection of fashionable mansions and a major naval base outside the town center. Contained within the district are singular examples of colonial and 19th-century public and domestic architecture representing the work of important period architects and builders, numerous exemplary high-style buildings, and, of equal importance, rows of small vernacular houses and shops. Buildings are predominantly of wood-frame construction with gable, gambrel, hip, or mansard roofs and clapboard or shingle sheathing, of one to three stories in height, and are set either close to or exactly at the sidewalk line on small lots. The handful of brick and stone buildings tend to be non-domestic. A variety of outbuildings, fences, lot landscaping treatments, walkway paving materials, and small public open spaces help complete the tight weave of texture which characterizes the streetscapes. 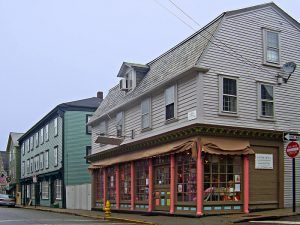 Newport is located at the southern end of Aquidneck Island, the largest island in Narragansett Bay, and sits at the entrance to the bay. It is located approximately 33 miles southeast of Providence, Rhode Island and 20 miles south of Fall River, Massachusetts.

Newport draws thousands of visitors every year due to its history, its setting on Newport’s waterfront, and the restaurants and shops located within it along Thames Street.