While utilizing the ranch as headquarters for his buffalo hunt, Roosevelt spent several evenings with Gregor Lang discussing politics and prospects for the cattle industry in the Badlands. A cattle ranching investment in Dakota seemed reasonably sound. Cattle raised in the Dakota Territory reaped the nutritional benefits of a variety of grasses Texas cattle did not enjoy, plus they could be shipped directly to market without enduring long drives that reduced the quality of the meat. That meant higher profits for Dakota ranchers. Roosevelt quickly arranged to purchase a herd of cattle tended by Sylvane Ferris and Bill Merrifield for $14,000 – significantly more than Roosevelt’s annual salary. That winter, following Roosevelt’s request, Ferris and Merrifield constructed the Maltese Cross Cabin. Roosevelt probably did not see his investment in strictly monetary terms, but, as a binding connection to the wide open spaces for which he had quickly become quite enamored.

Afterward, Roosevelt returned to New York, where he resumed his legislative duties in Albany. In the meantime, his wife Alice gave birth to a baby girl in New York City on February 12, 1884. A telegram arrived in Albany beseeching Roosevelt to quickly return to New York City; his wife and his mother, Mittie, were both dying in the Roosevelt home. On February 14, 1884, Theodore Roosevelt watched in horror as his mother died, then his wife, only hours apart.

Devastated, Roosevelt dealt with his immense grief by immersing himself in work. In June 1884, Roosevelt put his thoughts and energy to ranching at the Maltese Cross Ranch. He sunk another $26,000 into new cattle. Later that summer, Roosevelt brought two trusted friends and woodsmen from Maine, Bill Sewall, and Wilmot Dow, to help start a new, larger ranch down river, the Elkhorn Ranch. While Sewall and Dow constructed the ranch house, Roosevelt went on numerous hunting expeditions, including a 6-week excursion to the Bighorn Mountains. He returned to New York in December and the next summer was back in North Dakota. Despite his forebodings about overgrazing in the Badlands, he spent another $39,000 on additional cattle and spent significant time in local politics as chairman of the Stockmen’s Association.

The late spring thaw of 1886 gave way to a disastrous season for the Badlands cattle industry. Scorching summer conditions with temperatures reaching 125° F prohibited plant growth. Few crops were harvested, and little useful grazing land was left by the time winter set in. Worse, ranchers had packed the badlands with unsustainable numbers of cattle. Overgrazing and an extremely poor growing season took their toll as ranchers were unable to store any hay for the winter. 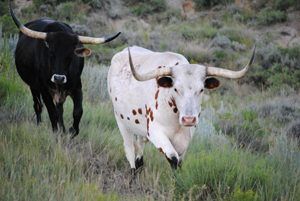 The winter of 1886-87 proved to be extraordinarily harsh, compounding the already difficult circumstances created by the vicious summer. Unable to feed their cattle, ranchers were forced to let them fend for themselves. One blizzard after another quickly buried what was left of the grazing land, and cattle were found “frozen to death where they stood” in temperatures as low as -41° F. Tens of thousands of cattle died in the Badlands in the winter of 1886-1887, around 80% of the total population. Gregor Lang, who in 1884, had convinced Roosevelt that cattle ranching in the Badlands was a safe investment, lost 85% of his herd of 3,000.

Roosevelt had been abroad during the devastating winter with his new wife, Edith, and was unaware of the horrors until he returned to the United States in late March of 1887. Upon his return to Medora, Roosevelt found he had lost over half his herd. The blow proved disastrous for Roosevelt, who lost over half of his $80,000 investment, the equivalent of approximately $1.7 million today. As for the future of the Elkhorn and Maltese Cross Ranches, Roosevelt wrote his sister Bamie, “I am planning to get out of it.”

The tragedy proved fatal for Medora. In 1887, the Pyramid Park Hotel, where Roosevelt spent his first night in the Badlands, was loaded onto a flatbed car and shipped to Dickinson. Medora was a ghost town within two years. 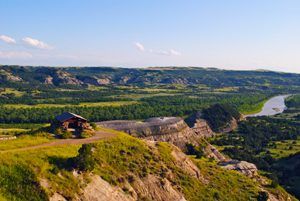 Although the ranching venture had spelled financial disaster for Roosevelt, the physically and psychologically transformative experience proved priceless. Roosevelt had sought to test his mettle and his manhood in an exceptionally rough part of the West and had excelled in every degree possible. He had transformed from a scrawny asthmatic to a burly, barrel-chested, bull-necked man with a dark suntan and tireless riding ability. Not only was he physically more mature and larger in stature, but he had also grown immensely in the minds of the local Medora people and, later, in the eyes of the nation.

A man who was largely sneered at upon his arrival in 1883, Roosevelt had grown to prominence, respect, and even admiration in the hearts and minds of local people for his manner and conduct. Roosevelt carried with him an enthusiasm and genuineness that common people connected with, and this rapport was the foundation of Roosevelt’s later political success. His enthusiasm for cowboy life spurred him to form the Rough Riders, the notable cavalry unit that brought Roosevelt national recognition during the Spanish-American War.

Importantly, the cattle ranching collapse and his experiences in the wilderness began to solidify in his mind the need for conservation, which he pursued notably in his Presidential years. The experience in Dakota had left an indelible mark on Roosevelt’s heart, though he would not return often or for long periods after 1887. To Roosevelt, the place where “the romance of my life began” became as much a beloved part of his past as it was a stepping stone for his future.

After Roosevelt’s death on January 6, 1919, a movement was initiated to establish a Roosevelt National Park in the Little Missouri Badlands. In 1921, Carl Olsen, owner of the Peaceful Valley Dude Ranch, introduced a bill in the North Dakota Legislature which petitioned the Congress of the United States to establish Roosevelt Park, but, Congress did not respond favorably at that time. 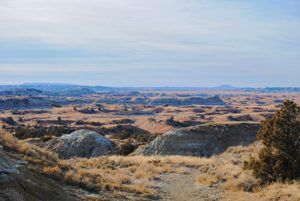 Visitors to the park today can experience the badlands in many of the same ways Theodore Roosevelt did in his time here, for the landscape is preserved as Roosevelt would have seen it. Whether one rides vigorously on horseback through the Badlands or relaxes in the shade of a cottonwood tree, he or she enjoys pastimes that registered deep in Roosevelt’s heart. The same sights, sounds, and smells are all to be experienced just as Roosevelt wrote about them. Most of the animals that Roosevelt saw and hunted still inhabit this unique landscape. It was here that the need for conservation was born in Theodore Roosevelt’s heart and mind, and the land here is preserved in his honor.

Since the park’s establishment, over 15 million visitors have recaptured the history of this rugged land and the men and women who challenged it.