When Anderson learned his man hadn’t been apprehended he approached postmaster and customs officer Charles Cavileer about using the post office to capture Collins. Cavileer went along with Anderson’s plan to nab Collins and Anderson took up residence in the building. It was Friday, November 8, 1878. From here we pick up the story as it was recalled by James R. Moorhead (son of William H. Moorhead, first sheriff of Pembina County) for Win V. Working of the Grand Forks Herald.

Moorhead and other young boys were playing near the post office when the final scene was played out. Moorhead stated “it was growing late in the afternoon although the sun was still warm. Anderson lay on a bench in the office. Cavileer was sorting mail. He looked out the window and saw Collins approaching. “Here comes your man now” he called to the marshal. Anderson sprang from the bench, examined his six-shooter and stepping around the counter, took a position a few feet from the door. When Collins entered, Anderson ordered him softly to throw up his hands. Collins complied and began to talk. Collins let his hand drop bit by bit when suddenly his right hand flashed to the inside of his shirt. Just before his fingers gripped the butt of his six-shooter, which hung in a harness under his left armpit, Anderson fired. The bullet clipped off most of the end of Collins’s right thumb up to the first joint and passed through his chest just above the heart. 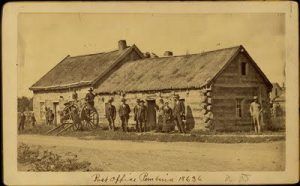 Although mortally wounded, Collins was still able to draw his weapon. Moorhead continued: “Collins fired and Anderson ran to the rear of the room and fled through the kitchen door before the wounded Collins could bring his gun up again to fire a second time. During the shooting, the group of young boys which included James Moorhead’s brother, Shep and a boy named Joe Bouvette, were sitting on an “open stairway” with other youths peeking through a rear window of the post office. Collins first bullet passed within an inch of a lad named Ira Davis, according to Moorhead. The wounded desperado worked his way past the stove to a point where he had a clear view of the kitchen door. Anderson returned and peered cautiously through the open door, but he exposed part of his body and Collins shot him through the doorway before the bad man fell to the street. When the smoke cleared, both men lay dead.

The official marshal service report tells pretty much the same tale, the only exception being that Anderson grabbed Collins’s left arm and asked another person in the post office to secure Collins’s right arm when Collins broke away and drew his weapon.

In true western fashion, both men “died with their boots on”. But Anderson died wearing something else….a pair of gold cufflinks—gold cuff links given to him on the day of his marriage by his best man – William Collins. Although William Anderson was several years older, he and William Collins had gone to school together and each had been the best man at the others wedding. Somewhere along the line, they had gone their separate ways – one becoming a lawman, the other an outlaw. William Anderson left behind a wife and two children; his family received the $10,000 reward offered for the arrest of Collins. William Anderson’s body was shipped back to Texas where it rests in the Greenwood Cemetery in Dallas. William Collin’s body was buried in an unmarked grave in Pembina.

The old post office in Pembina stood until May of 1883 when it was demolished. Built in 1864 it had served as the U.S. Customs House, the first post office and home of Pembina’s first postmaster, Charles Cavileer. Upon its demolition, the Pembina paper commented “it has served its day and generation (and) has to submit to the destroyer. In the old front door is a bullet hole, the relic of a terrible tragedy which occurred some five years ago, when a detective and a desperado exchanged mutually fatal shots, both expiring in a few minutes” — the bloody legacy of Sam Bass, Texas outlaw. 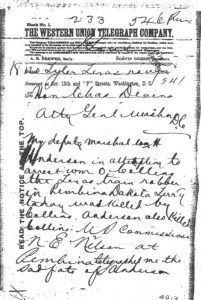 Telegram by US Marshal informing of deputy marshal’s death in Pembina.

Excerpted from “Murder and Mayhem in Pembina County“. © Jim Benjaminson, 2013.

About the Author: Jim Benjaminson is a retired 32 year veteran of the North Dakota State Highway Patrol, Motor Carrier Operations. Prior to that, he was a deputy sheriff with the Pembina County Sheriff’s department, the oldest in North Dakota dating back to 1867. Benjaminson is a lifelong resident of North Dakota, growing up in Cavalier, which is the county seat of Pembina County.  He currently lives in Walhalla North Dakota and has been involved in the Pembina County Historical Society for many years as a past historian, President, Vice President, and Director. In addition to writing history on law enforcement, Benjaminson is an avid antique automobile collector, historian, writer, and photographer, with published works in magazines including Special Interest Autos, Collectible Automobile, North Dakota History, North Dakota Peace Officers and others. He was also a major contributor to the Standard Catalog of American Cars, 1805-1942 encyclopedia, and has written three books on the history of Plymouth and De Soto automobiles.