Smudging is a ritualistic burning of herbs and plants to purify and cleanse negative energy, bring good luck, and protect a person or place.

Incense over a medicine bundle, by Edward S. Curtis, 1908.

The practice of burning medicinal or sacred plants has been utilized worldwide for centuries. In America, the practice was utilized by many Native American tribes who used the sacred smoke to purify, bless and spiritually cleanse themselves and their surroundings. Many believe that herbs’ power and healing properties can rid a person or place of unwanted thoughts, sadness, anxieties, spirits, impurities, poor health, and unwanted energy or emotions. The cleansing leaves behind good spirits and peace and harmony for both individuals and the environment.

The burning takes place in a shell or clay bowl while prayers of gratitude and wellbeing are said aloud. The smoke is traditionally fanned using a feather or the hand to direct the smoke over or person or throughout a living space.

Four elements are involved in smudging, a central theme in many Native American rites.

Smudging is often performed before a ceremony or special gathering. It is also conducted after an argument to “clear the air” when moving into a new home, when individuals are sick, and on various other occasions. Smudging is still practiced worldwide and is regarded with utmost recognition and respect. It is a practice that should always be performed with intention, reverence, and deep gratitude to those who came before us. 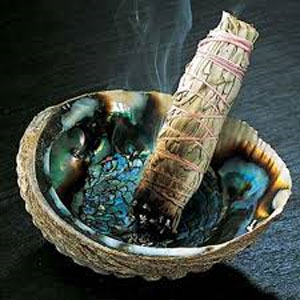 If smudging indoors, open windows and doors for steady airflow to help the smoke and negative energy to leave easily.

Place plant leaves in an abalone shell, clay bowl, or clamshell and light with a wooden match. Let flame for 20-30 seconds before extinguishing. The leaves or sticks will then smoke gently like incense. Blow on your smudge stick occasionally to keep the embers going, relight them as needed.

Read or recite the prayer or blessing.

It is customary to smudge oneself, top-down, before moving on to others and the surrounding space. 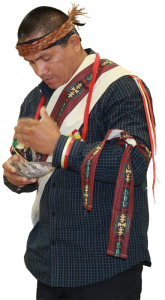 Wave the smoke over a person or an area with a feather or a hand. When purifying a person, they should gently inhale the smoke. If purifying an area, slowly move around the space clockwise, waving the smoke into all areas of your space.

When complete, extinguish the smudge stick by pressing the burning tip firmly into the fireproof vessel until the smoke no longer rises. Never leave a lit smudge stick unattended.

The ashes are believed to have absorbed the negative energy and should be returned to the earth on bare soil outdoors.

A person can smudge themselves, or someone can lead a smudge by holding the container and directing the smoke over others.

These plants are naturally aromatic and have some medical/mental health benefits and/or some historical, spiritual significance. These smudge plants or sticks can usually be purchased as small bundles of leaves and stems.

Sage – Technically known as Salvia Officinalis, the term “Salvia” comes from the Latin word “salvare,” which means “to heal.” Sage has long been held sacred by many Native Americans because of its effective purifying energies. Burning sage improves overall well-being, provides balance, cleanses the body and mind of negative spirits, and allows individuals to connect to the spiritual realm. Long utilized in smudging ceremonies, it is also said to enhance intuition, improve mood and cognition, and ward off negativity and toxicity. People have been cooking with sage for thousands of years. Like other culinary herbs, it has long been thought to be a digestive aid and appetite stimulant. The herb has also been used for centuries for medicinal purposes for a wide range of ailments and injuries. White Sage, a perennial herb native to the American Southwest, is one of the traditionally most common plants used in smudging. White sage is not only ideal for clearing the air of harmful energy, but it also releases negative ions that fight against things like dust, bacteria, and pollution. 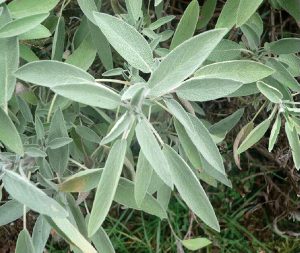 Cedar – Officially called Cedrus, these large evergreens with needle-like leaves generally grow at high altitudes in both full sun and wet, misty forests. Of the Pine Tree Family, its wood, berries, leaves, and oil are all used for medicinal purposes. Growing around the world, the tree has been used for various purposes since ancient times. Native Americans utilized every part of the cedar tree. They made spears and arrows from the wood, burned the wood for fuel and incense, used the leaves and branches as insecticides, made medicines, offered it to the sacred fire during sweat lodge ceremonies, and burned it during prayers. It was also used for various medicinal purposes. When boiled, it is used to purify indoor air and cedar baths. Cedar is popular in smudging for cleaning and purifying, eliminating evil spirits, obtaining balance, promoting positivity, and connecting with the spiritual world.

Palo Santo – Officially known as Bursera Graveolens, Palo Santa is a tree native to Central and South America. Producing very fragrant resin that has hints of pine, mint, and lemon. Meaning “holy wood,” or “wood of the saints,” in Spanish, its wood, resin, and oil have been used for centuries by Indigenous people in sacred ceremonies, for medicinal purposes, and to ward off evil spirits. Of the citrus family, related to Frankincense, Myrrh, and Copal, it has also long been used in smudging, which can have immediate calming effects, helping with stress, anxiety, and depression. It is often utilized to clear negative energy, purify, and has a cleansing effect on the body and mind. 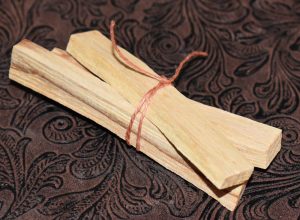 Sweetgrass – Known as the hair of Mother Earth, sweetgrass has long been used for spiritual and medicinal uses. Native Americans regard Sweetgrass as sacred medicine and continue to use it in shamanic healing today. Clippings of sweetgrass are usually braided and then dried before burning. With its vanilla-like scent, the smoke is thought to attract good spirits and positive energies. It is used as a smudging tool to purify auras, cleanse objects, and clear ceremonial areas or healing spaces of negative energy. It is also believed to carry prayers into the spirit world. It does not produce an open flame but rather a sweetly scented smoke. Sweetgrass can also be carried or worn as a protective amulet.

Tobacco – Natural Tobacco (not chemical-filled tobacco) is a highly sacred medicine plant and is believed to be the ideal bridge between the human and spiritual worlds. The plants have long been important in Native American culture for social, religious, ceremonial purposes, and medicinal remedies. It does not need to be smoked but can still provide spiritual benefits, especially in purification ceremonies.

Yerba Santa – Yerba santa is Spanish for “holy weed” or “holy herb.” This potent medicinal herb is native to California, and its leaves had long been used by Native Americans to make tea and poultices for several ailments and wounds. It was also smoked to relieve asthma. The herb’s flavor is good and was also used in foods, beverages, and the leaves were chewed for pleasure.