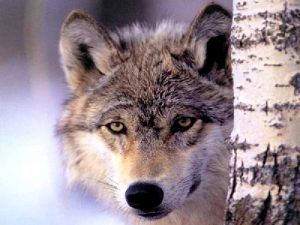 One night he came to the home of a wolf. “Hah!” said the wolf; “what are you doing so far from your home?”

“I am looking for the place where the Sun lives,” replied Scarface. “I have been sent to speak with him.”

“I have traveled over much country,” said the wolf; “I know all the prairies, the valleys, and the mountains; but I have never seen the Sun’s home. But wait a moment. I know a person who is very wise, and who may be able to tell you the road. Ask the bear.”

The next day Scarface went on again, stopping now and then to rest and to pick berries, and when night came he was at the bear’s lodge.

“Where is your home?” asked the bear. “Why are you traveling so far alone?”

“Ah,” replied the man, “I have come to you for help. Pity me. Because of what that girl said to me, I am looking for the Sun. I wish to ask him for her.”

“I do not know where he lives,” said the bear. “I have traveled by many rivers and I know the mountains, yet I have not seen his lodge. Farther on there is someone–that striped face–who knows a great deal; ask him.”

When the young man got there, the badger was in his hole. But Scarface called to him, “Oh, cunning striped face! I wish to speak with you.”

The badger put his head out of the hole and said, “What do you want, my brother?”

“I wish to find the Sun’s home,” said Scarface. “I wish to speak with him.”

“I do not know where he lives,” answered the badger. “I never travel very far. Over there in the timber is the wolverine. He is always traveling about and knows many things. Perhaps he can tell you.”

Scarface went over to the forest and looked all about for the wolverine, but could not see him; so he sat down on a log to rest. “Alas, alas!” he cried; “wolverine, take pity on me. My food is gone, my moccasins are worn out; I fear I shall die.”

Someone close to him said, “What is it, my brother?” and looking around, he saw the wolverine sitting there.

“She whom I wish to marry belongs to the Sun,” said Scarface; “I am trying to find where he lives, so that I may ask him for her.”

“Ah,” said the wolverine, “I know where he lives. It is nearly night now, but tomorrow I will show you the trail to the big water. He lives on the other side of it.”

Early in the morning they set out, and the wolverine showed Scarface the trail, and he followed it until he came to the water’s edge. When he looked out over it, his heart almost stopped. Never before had anyone seen such a great water. The other side could not be seen and there was no end to it. Scarface sat down on the shore. This seemed the end. His food was gone; his moccasins were worn out; he had no longer strength, no longer courage; his heart was sick. “I cannot cross this great water,” he said. “I cannot return to the people. Here by this water I shall die.”

Yet, even as he thought this, helpers were near. Two swans came swimming up to the shore and said to him, “Why have you come here?

What are you doing? It is very far to the place where your people live.”

“I have come here to die,” replied Scarface. “Far away in my country is a beautiful girl. I want to marry her, but she belongs to the Sun; so I set out to find him and ask him for her. I have traveled many days. My food is gone. I cannot go back; I cannot cross this great water; so I must die.”

“No,” said the swans; “it shall not be so. Across this water is the home of that Above Person. Get on our backs, and we will take you there.”

Scarface stood up. Now he felt strong and full of courage. He waded out into the water and lay down on the swans’ backs, and they swam away. It was a fearful journey, for that water was deep and black, and in it live strange people and great animals which might reach up and seize a person and pull him down under the water; yet the swans carried Scarface safely to the other side. There was seen a broad, hard trail leading back from the water’s edge.

“There,” said the swans; “you are now close to the Sun’s lodge. Follow that trail, and soon you will see it.”

Scarface started to walk along the trail, and after he had gone a little way he came to some beautiful things lying on the trail. There was a war shirt, a shield, a bow, and a quiver of arrows. He had never seen such fine weapons. He looked at them, but he did not touch them, and at last, walked around them and went on. A little farther along he met a young man, a very handsome person. His hair was long; his clothing was made of strange skins, and his moccasins were sewed with bright feathers.

The young man spoke to him and asked, “Did you see some weapons lying in the trail?”

“Did you touch them?” said the young man.

“No,” said Scarface; “I supposed someone had left them there, and I did not touch them.”

“You do not meddle with the property of others,” said the young man. “What is your name, and where are you going?” Scarface told him. Then said the young man, “My name is Early Riser (the morning star). The Sun is my father. Come, I will take you to our lodge. My father is not at home now, but he will return at night.”

At length, they came to the lodge. It was large and handsome, and on it were painted strange medicine animals. On a tripod behind the lodge were the Sun’s weapons and his war clothing. Scarface was ashamed to go into the lodge, but Morning Star said, “Friend, do not be afraid; we are glad you have come.”

When they went in a woman was sitting there, the Moon, the Sun’s wife and the mother of Morning Star. She spoke to Scarface kindly and gave him food to eat, and when he had eaten she asked, “Why have you come so far from your people?”

So Scarface told her about the beautiful girl that he wished to marry and said, “She belongs to the Sun. I have come to ask him for her.”