It must not be overlooked that the appeal to justice had first been tried before taking this desperate step. Little Wolf had gone to the agent about the middle of the summer and said to him: “This is not a good country for us, and we wish to return to our home in the mountains where we were always well. If you have not the power to give permission, let some of us go to Washington and tell them there how it is, or do you write to  Washington and get permission for us to go back.”

“Stay one more year,” replied the agent, “and then we will see what we can do for you. “No,” said Little Wolf. “Before another year there will be none left to travel north. We must go now.”

Soon after this, it was found that three of the Indians had disappeared and the chief was ordered to surrender ten men as hostages for their return. He refused. “Three men,” said he, “who are traveling over the wild country can hide so that they cannot be found. You would never get back these three, and you would keep my men prisoners always.”

The agent then threatened if the ten men were not given up to withhold their rations and starve the entire tribe into submission.  He forgot that he was addressing a Cheyenne. These people had not understood that they were prisoners when they agreed to friendly relations with the government and came upon the reservation.  Little Wolf stood up and shook hands with all present before making his final deliberate address.

“Listen, my friends, I am a friend of the white people and have been so for a long time. I do not want to see blood spilt about this agency. I am going north to my own country. If you are going to send your soldiers after me, I wish you would let us get a little distance away. Then if you want to fight, I will fight you, and we can make the ground bloody at that place.”

The Cheyenne was not bluffing. He said just what he meant, and I presume the agent took the hint, for although the military was there they did not undertake to prevent the Indians’ departure. The next morning the teepees were pulled down early and quickly. Toward the evening of the second day, the scouts signaled the approach of troops. Little Wolf called his men together and advised them under no circumstances to fire until fired upon.

An Arapaho scout was sent to them with a message. “If you surrender now, you will get your rations and be well treated.” After what they had endured, it was impossible not to hear such a promise with contempt. Said Little Wolf: “We are going back to our own country.”

We do not want to fight.” He was riding still nearer when the soldiers fired, and at a signal, the Cheyenne made a charge. They succeeded in holding off the troops for two days, with only five men wounded and none killed, and when the military retreated the Indians continued northward carrying their wounded.

This sort of thing was repeated again and again. Meanwhile, Little Wolf held his men under perfect control. There were practically no depredations. They secured some boxes of ammunition left behind by retreating troops, and at one point the young men were eager to follow and destroy an entire command that was apparently at their mercy, but their leader withheld them. They had now reached the buffalo country, and he always kept his main object in sight. He was extraordinarily calm. Doctor Grinnell was told by one of his men years afterward: “Little Wolf did not seem like a human being. He seemed like a bear.” It is true that a man of his type in a crisis becomes spiritually transformed and moves as one in a dream.

At the Running Water, the band divided, Dull Knife going toward Red Cloud agency. He was near Fort Robinson when he surrendered and met his sad fate. Little Wolf remained all winter in the Sand Hills, where there was plenty of game and no white men. Later he went to Montana and then to Pine Ridge, where he and his people remained in peace until they were removed to Lame Deer, Montana, and there he spent the remainder of his days. There is a clear sky beyond the clouds of racial prejudice, and in that final Court of Honor, a noble soul like that of Little Wolf has a place.

By Charles A. Eastman, 1918. Compiled and edited by Kathy Weiser/Legends of America, updated December 2019.

About the Author: Excerpted from the book Indian Heroes and Great Chieftains, by Charles A. Eastman, 1918. (now in the public domain) Charles A. Eastman earned a medical degree from Boston University School of Medicine in 1890 and then began working for the Office of Indian Affairs later that year. He worked at the Pine Ridge Agency, South Dakota, and was an eyewitness to both events leading up to and following the Wounded Knee Massacre of December 29, 1890. Himself part-Sioux, he knew many of the people about whom he wrote. 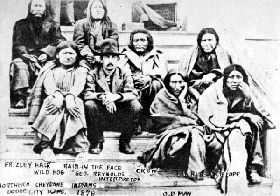