In 1867, the Muscogee people adopted a written constitution, which provided for a Principal Chief and a Second Chief, a judicial branch, and two legislative chambers composed of a House of Kings (similar to the Senate) and a House of Warriors (similar to the House of Representatives.) Representation in both houses of this Legislative assembly was determined by each tribal town. A new capitol was established the same year at Okmulgee. In 1878 the tribal government constructed a native stone Council House. Today, it serves as the Council House Museum in the center of the modern city of Okmulgee.

This “constitutional” period lasted for the remainder of the 19th century. However, in the late 1800s, the Dawes Commission began negotiating with the Muscogee Nation for the allotment of land and in 1898, Congress passed the Curtis Act which required for the dismantling of the National governments of the Five Civilized Tribes. 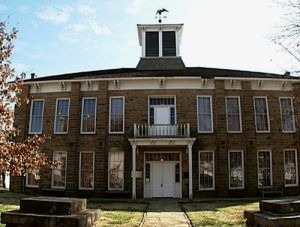 In the early 20th century, the process of allotting lands to individual citizens was completed, but, dismantling of the Muscogee government was never fully executed, as the nation continued to maintain a Principal Chief

Long after the partial dismantling of the nation’s government, the tribe drafted and adopted a new constitution in the 1970s. They also revitalized the National Council and began challenging the earlier demands of the Federal Government in the Supreme Court, which affirmed the Nation’s sovereign rights to maintain their own court system and levy taxes.

Today, the Muscogee tribe is a federally recognized Indian Nation, with their capitol continuing to be in Okmulgee, Oklahoma.

There are also federally recognized Creek tribes in Alabama. Other bands in Alabama and Georgia are recognized by the state but their requests for federal recognition have been denied. Other Muscogee living in Florida and Texas have not been recognized by either state or federal governments.