That leader had quickly saddled his favorite war pony and was starting with his young men for the south end of the camp, when a fresh alarm came from the opposite direction, and looking up, he saw Custer’s force upon the top of the bluff directly across the river. As quick as a flash, he took in the situation — the enemy had planned to attack the camp at both ends at once; and knowing that Custer could not ford the river at that point, he instantly led his men northward to the ford to cut him off. The Cheyennes followed closely. Custer must have seen that wonderful dash up the sage-bush plain, and one wonders whether he realized its meaning.  In a very few minutes, this wild general of the plains had outwitted one of the most brilliant leaders of the Civil War and ended at once his military career and his life. 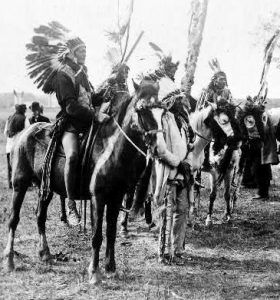 In this dashing charge, Crazy Horse snatched his most famous victory out of what seemed frightful peril, for the Sioux could not know how many were behind Custer. He was caught in his own trap. To the soldiers it must have seemed as if the Indians rose up from the earth to overwhelm them. They closed in from three sides and fought until not a white man was left alive. Then they went down to Reno’s stand and found him so well entrenched in a deep gully that it was impossible to dislodge him. Gall and his men held him there until the approach of General Terry compelled the Sioux to break camp and scatter in different directions.

While Sitting Bull was pursued into Canada, Crazy Horse and the Cheyenne’s wandered about, comparatively undisturbed, during the rest of that year, until in the winter the army surprised the Cheyenne, but did not do them much harm, possibly because they knew that Crazy Horse was not far off.

His name was held in wholesome respect. From time to time, delegations of friendly Indians were sent to him, to urge him to come in to the reservation, promising a full hearing and fair treatment.

For some time he held out, but the rapid disappearance of the buffalo, their only means of support, probably weighed with him more than any other influence. In July, 1877, he was finally prevailed upon to come in to Fort Robinson, Nebraska, with several thousand Indians, most of them Ogallala and Minneconwoju Sioux, on the distinct understanding that the government would hear and adjust their grievances.

At this juncture General Crook proclaimed Spotted Tail, who had rendered much valuable service to the army, head chief of the Sioux, which was resented by many.

The attention paid Crazy Horse was offensive to Spotted Tail and the Indian scouts, who planned a conspiracy against him. They reported to General Crook that the young chief would murder him at the next council, and stampede the Sioux into another war. He was urged not to attend the council and did not, but sent another officer to represent him. Meanwhile the friends of Crazy Horse discovered the plot and told him of it. His reply was, “Only cowards are murderers.”

His wife was critically ill at the time, and he decided to take her to her parents at Spotted Tail agency, whereupon his enemies circulated the story that he had fled, and a party of scouts was sent after him. They overtook him riding with his wife and one other but did not undertake to arrest him, and after he had left the sick woman with her people he went to call on Captain Lea, the agent for the Brules, accompanied by all the warriors of the Minneconwoju band. This volunteer escort made an imposing appearance on horseback, shouting and singing, and in the words of Captain Lea himself and the missionary, the Reverend Mr. Cleveland, the situation was extremely critical. Indeed, the scouts who had followed Crazy Horse from Red Cloud agency were advised not to show themselves, as some of the warriors had urged that they be taken out and horsewhipped publicly.

Under these circumstances Crazy Horse again showed his masterful spirit by holding these young men in check. He said to them in his quiet way: “It is well to be brave in the field of battle; it is cowardly to display bravery against one’s own tribesmen. These scouts have been compelled to do what they did; they are no better than servants of the white officers. I came here on a peaceful errand.”

The captain urged him to report at army headquarters to explain himself and correct false rumors, and on his giving consent, furnished him with a wagon and escort. It has been said that he went back under arrest, but this is untrue. Indians have boasted that they had a hand in bringing him in, but their stories are without foundation. He went of his own accord, either suspecting no treachery or determined to defy it.

When he reached the military camp, Little Big Man walked arm-in-arm with him, and his cousin and friend, Touch-the-Cloud, was just in advance.

After they passed the sentinel, an officer approached them and walked on his other side. He was unarmed but for the knife which is carried for ordinary uses by women as well as men. Unsuspectingly he walked toward the guardhouse, when Touch-the-Cloud suddenly turned back exclaiming: “Cousin, they will put you in prison!” 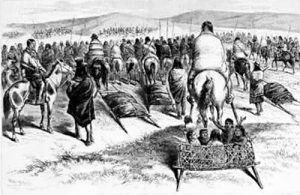 “Another white man’s trick! Let me go! Let me die fighting!” cried Crazy Horse. He stopped and tried to free himself and draw his knife, but both arms were held fast by Little Big Man and the officer. While he struggled thus, a soldier thrust him through with his bayonet from behind.

The wound was mortal, and he died in the course of that night, his old father singing the death song over him and afterward carrying away the body, which they said must not be further polluted by the touch of a white man. They hid it somewhere in the Bad Lands, his resting place to this day.

Thus died one of the ablest and truest American Indians. His life was ideal; his record clean. He was never involved in any of the numerous massacres on the trail, but was a leader in practically every open fight. Such characters as those of Crazy Horse and Chief Joseph are not easily found among so-called civilized people. The reputation of great men is apt to be shadowed by questionable motives and policies, but here are two pure patriots, as worthy of honor as any who ever breathed God’s air in the wide spaces of a new world.

Though Charles A. Eastman (Ohiyesa) doesn’t specifically say so, Crazy Horse was a member of the Ogallala Lakota tribe, a band of the Sioux. He died on September 5, 1877.

Compiled and edited by Kathy Weiser/Legends of America, updated June, 2017.

Excerpted from the book Indian Heroes and Great Chieftains, by Charles A. Eastman, 1918. The text as it appears here; however, is not verbatim as it has been edited for clarity and ease of the modern reader. Charles A. Eastman earned a medical degree from Boston University School of Medicine in 1890, and then began working for the Office of Indian Affairs later that year. He worked at the Pine Ridge Agency, South Dakota, and was an eyewitness to both events leading up to and following the Wounded Knee Massacre of December 29, 1890. Himself part-Sioux, he knew many of the people about whom he wrote.