“And gayly shines the Fairy-land —
But all is glistening show,
Like the idle gleam that December’s beam
Can dart on ice and snow. 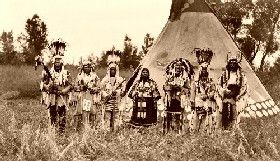 About the Author-Article: Blackfoot Indians Stories was published by George Bird Grinnell in 1913 and is now in the public domain. George Bird Grinnell studied at Yale with an intense desire to be a naturalist. He talked his way onto a fossil collecting expedition in 1870 and then served as the naturalist on Custer’s expedition to the Black Hills in 1874. Grinnell was interested in what he could learn from the Indian tribes of the region, and early on, was well known for his ability to get along with Indian elders. The Pawnee called him White Wolf, and eventually adopted him into the tribe. Grinnell was also editor of Forest and Stream, the leading natural history magazine in North America, the founder of the Audubon Society and the Boone and Crockett Club, and an advisor to Theodore Roosevelt. Glacier National Park came about largely through his efforts. Grinnell also spent significant time working for fair and reasonable treaties with Native American tribes, and for the preservation of America’s wildlands and resources.