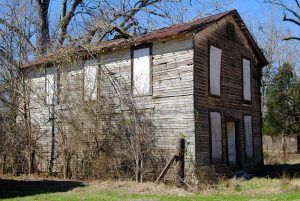 The old Masonic Lodge still stands in the ghost town of Rodney, Mississippi.

By the 1850s, Rodney had become the busiest port on the Mississippi River between New Orleans, Louisiana and St. Louis, Missouri. Many of the major steamboats of the era made Rodney one of their chief ports of call. By this time, it had grown to nearly 1,000 area residents and boasted 35 stores, two banks, two newspapers, a large hotel, complete with a ballroom; and several churches and schools. The next decade it grew even faster, quadrupling its size to 4,000 residents by 1860. Its main business streets, Commerce and Magnolia, were lined with businesses including banks, wagon makers, tinsmiths, barbers, doctors, dentists, general mercantile stores, hotels, saloons, and pastry shops. Mississippi Lodge #56 of the Free and Accepted Masons was located in Rodney from the 1850s until the 1920s.

The second church built in Rodney was the Mt. Zion No. 1 Baptist Church in 1850. Also known as the First Baptist Church, it is a one-and-a-half-story gable-front frame structure built in a transitional Greek-Gothic Revival architectural style. It features a pointed-arch entrance door with archivolt trim and is topped by a polygonal belfry with a domed cap. Prior to 2011, it had been restored and was in very good condition, with its interior paneling, pews, and preacher’s podium intact, and even a basket for visitor contributions. However, the April and May flooding of the Mississippi River took its toll on the building, as well as many others in little Rodney. Its front doors stand open today, displaying fallen paneling, scattered pews, and debris scattered throughout this once important building in the community.

Like so many other southern towns, especially those along the Mississippi River, Rodney got its taste of Civil War action. In June 1863, 40 Union cavalry troops were disembarked in Rodney to launch a surprise raid to the east on the Confederate controlled Mobile and Ohio Railroad. The Confederates won the engagement, capturing the Union troops which sought to take the Mobile and Ohio Railroad. 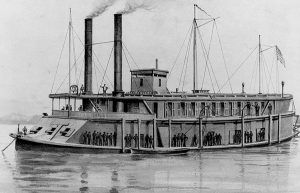 After the fall of Vicksburg on July 4, 1863, the Confederacy was cut in two. For the next two years, Union warships patrolled the Mississippi River to shut down all Confederate river traffic. The “tinclad” gunboat USS Rattler was stationed at Rodney. Though the Navy Admiral, David Porter, had left strict orders that no one was to leave the ship, the crew was restless. When the Reverend Baker, a northern sympathizer, who was to preach at the Presbyterian Church, invited Captain Walter Fentress and his men to attend services on September 13, 1863, his invitation was accepted. That Sunday morning, the captain, a lieutenant, and some 18 soldiers arrived at the church, dressed in their best uniforms, and quietly seated themselves in the congregation. None were armed except Second Assistant Engineer A. M. Smith, who carried a hidden revolver. The sailors’ need for release from the boredom on the ship, would prove unwise. Just as the second hymn began, a Confederate Calvary commander — Lieutenant Allen walked up to the Reverend Baker, apologized for the interruption, and announced to the congregation that the church was surrounded by rebels and demanded the surrender of the Union sailors. When Engineer A.M. Smith, drew his pistol and fired a shot through Lieutenant Allen’s hat, all hell broke out, as the congregation dove beneath the pews. At the sound of the shot, the Confederate Cavalry surrounding the building fired through the windows, striking the ceiling or opposite wall. Confederate Lieutenant Allen then shot his revolver once into the ceiling, shouting for all to cease fire. In the end, 17 Federal troops were captured by the Confederates, including the lieutenant and captain.

When word of the prisoners reached the Rattler, the gunboat bombarded the town and the church, which, at that time was only about 300 yards from the Mississippi River. However, when the Confederate commander, Lieutenant Allen, sent word that if the shelling did not stop, all prisoners would be hanged, the Union ceased the shelling, but not before the church and four homes were hit. One of the cannonballs was embedded in the front of the church. By 1:30 p.m. the initial excitement had passed and Rattler again lay at anchor, but, now in deep water. Afterward, the crew of the Rattler became the laughingstock of the nation, for it was the first time in history a small squad of cavalry captured the crew of an ironclad gunboat. After this attack, citizens of Rodney formed Company D. 22nd Mississippi infantry to fight against the Union army and the Union sympathizing Reverend Baker soon left the area. Some months later Captain Fentress and his men were exchanged for captured Rebel soldiers and resumed their Navy service at other posts.

In September 1864, Union troops were sent from Vicksburg to destroy a reported Confederate troop concentration at Rodney. Landing here, the Union infantry regiment plundered almost every house in town. Later that same year, the USS Rattler was hit by a heavy gale near Grand Gulf, Mississippi on December 30th driving her ashore and causing her to strike a snag and sink. Though her crew survived, the gunboat was a total loss. After being abandoned by the U.S. Navy, she was burned by the Confederates.

Though Rodney and the surrounding area had been spared any great battles, the Civil War left its mark, as the land was stripped of food, livestock, and slaves by Union troops. Reconstruction further stripped away the prosperity of Rodney, as well as much of the south. The Civil War would spell the beginning of the end for this once-thriving port city.

Some; however, retained hope for the future and in 1868, the Catholics built the Sacred Heart Church, an outstanding example of Carpenter Gothic architecture, with its board and batten siding, heavy label moldings and wooden pinnacles. The church no longer stands in Rodney today, as it was moved to Grand Gulf Military Park in 1884.

Just a year after the Catholic church was built in Rodney, the town was almost entirely consumed by a fire; but, obviously, the Sacred Heart Church was spared. One witness of the fire, an officer aboard the steamer Richmond, described the blaze:

“Wednesday night, shortly after we left Vicksburg, a bright light was observed in the southern horizon. All manner of speculation was rife on board concerning the cause and as the light grew nearer and nearer the interest grew in proportion. At last after several hours of eager watching we bore in sight of the beautiful Town of Rodney and lo, we beheld it the object of the wrath of the fire king. The whole village was wrapped in a mantle of flames and as at two o’clock in the morning our boat glided swiftly down along the other shore, the scene was grand beyond description, lit up as it was by the lurid lights from burning buildings, mingled with the moon’s pale beams.”

In the meantime, a greater “disaster” was forthcoming for Rodney. A large sand bar had formed in the nearby Mississippi River, causing the grand waterway to alter its course in about 1870. With the river now two miles west of Rodney, the town obviously lost its port. With many of its buildings destroyed by the fire of 1869 and its river commerce gone, many people left the area. Rodney’s population further declined when it was bypassed by the Natchez, Jackson & Columbus Railroad that reached nearby Fayette, Mississippi. With its citizens poor, it was too late for Rodney. 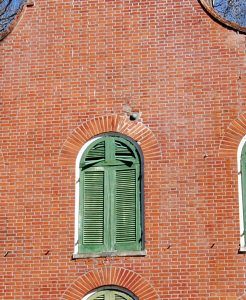 An authentic cannonball in the spot on the Rodney Presbyterian Church that was hit in 1863.

In 1923, the last full-time pastor of the Presbyterian Church resigned leaving behind a congregation of just 16 people; although church services probably continued intermittently for several years. In 1966, the church was conveyed to the United Daughters of the Confederacy. Two years later, Mississippi appropriated funds for the restoration. It was added to the National Register of Historic places 1973. It continues to stand in Rodney today, surrounded by a multitude of historic signs. The front facade of the church displays a cannonball above the upper middle window. Though this is not the original cannonball that hit the building in 1863, it is an authentic ball of the period, placed during restoration, at the spot where the church was originally hit. Today, the exterior of one of the oldest churches in the state is once again deteriorating due to flooding in 2011 and lack of funding.

Though a number of people still lived in Rodney in 1930, its life as an “official” town came to a permanent end by an executive proclamation Governor Theodore Bilbo.

By 1933, the population of Rodney had diminished to less than 100 and by 1957, only seven congregation members remained at the Sacred Heart Catholic Church. In February 1969, the property was conveyed to the Rodney Foundation, Inc. by the Catholic Diocese of Natchez-Jackson. However, by 1982, the foundation found it was unable to restore and maintain the building, and donated it to the state of Mississippi. A year later, the church was moved to the Grand Gulf Military Park, where it stands today. The central tower no longer retains its original pinnacles and wooden crenellation; however, it was completely restored. The interior is finished with simple plaster walls, and wooden ceiling and floor. It is open today for visitors of the park and continues to be as a non-denominational chapel by religious and other groups approved by the park. In 1894, the church was the setting for the christening of the future Most Reverend Bishop Charles P. Greco, Bishop of the Diocese of Alexandria (Louisiana). Bishop Greco was the first Mississippian to become a Roman Catholic Bishop. 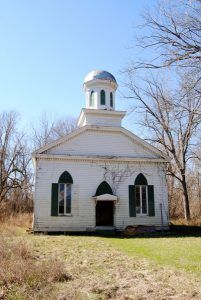 The last church to be actively used was the 1850 Baptist Church. Though still standing, its interior was virtually destroyed by the floods in 2011. The small town of Rodney still supports just a handful of citizens and a number of its original buildings. The Rodney Center Historic District was added to the National Register of Historic Places in 1980. Some of the homes have been maintained or restored, and continue to be utilized as homes today. However, there are no remaining businesses in this small town. The Opera House, town hall, and other major commercial buildings have long disappeared. However, a two-story red brick commercial building continues to stand, as well as the old Alston Grocery Store. This business, operated by the Alston family since 1915, was probably the last to close. More buildings remain in various stages of decay or have completely fallen to the ground, and are overgrown with trees and brush.

Today, there is only one serviceable road in and out of Rodney. From Alcorn, highway M-558 dead-ends at the once-bustling river port town. The final three miles are dirt and gravel. 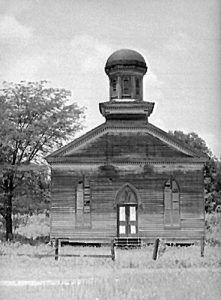 The Baptist Church in Rodney prior to restoration, by Marion Post Wolcott, 1940.

The Rodney Town Cemetery is located on the wooded bluff behind the Presbyterian church. Abandoned and overgrown today, it not only contains the remains of locals, but also the graves of river travelers, and folks from Saint Joseph, Louisiana, across the river from Rodney. Many of the graves our enclosed in rusting ornate wrought-iron fences. Here can also be found the traces of Confederate Civil War trenches that overlook the old river bed. These defenses once gave a commanding view of the area and the river.

Grand Gulf – A Bustling Port Along the River

Mississippi River and the Expansion of America 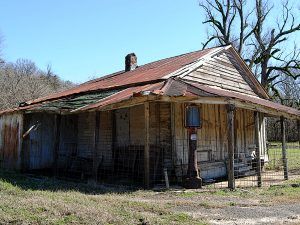 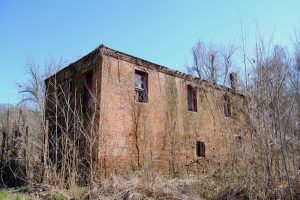 4 thoughts on “Rodney, Mississippi – From Prominence to Ghost Town”