San Luis Obispo County – There are numerous caves located through San Luis Obispo County that provided great cover for outlaws during California’s Wild West days. Near Avila Beach, a group of bandits was said to have made one of these caves their hiding place where they hid much of there stolen cache. No additional information is available on the exact location of the cave.

Shasta County – Long ago, when a detachment of soldiers was transporting an Army payroll along the road between Redding and Weaverville, California, they were attacked by Indians. While the battle ranged, one soldier had the foresight to bury the gold and marked it by burying his rifle straight up in the ground. He then joined the rest of the soldiers in the frenzied battle. Severely wounded, he was later rescued and taken to French Gulch where he told the story of the attack and buried payroll before he died. Though the army began an immediate search, they were unable to find the rifle or the hidden gold. Many years later, two deer hunters in the vicinity found the rifle and not knowing the story, removed it and took it with them. Today, French Gulch is a sleepy little village located about 10 miles east of Lewiston, California.

Tehama County – Peter Lassen was a pioneer and landowner in California long before its Gold Rush days of 1849. Arriving in 1840, he was able to secure a 26,000-acre land grant in 1843. Located in the upper Sacramento Valley, Lassen hoped to develop his land into an empire and established the Rancho Los Bosquejo, or the “ranch of the wooded places” in 1845. In the years that followed, Lassen developed a trading post, a new settlement, vineyards, and farms to entice people to what he believed would be his new empire. However, when gold was discovered at Sutter’s Mill in Coloma, his workers and settlers abandoned him for the goldfields. Lassen’s fortunes would rise and fall over the next decade until he was murdered in 1859 while traveling to Virginia City, Nevada to prospect for silver. Afterward, a legend began to grow that Lassen had buried thousands of dollars in gold near his home on the Rancho Los Bosquejo. Located at the confluence of Deer Creek and the Sacramento River, he was said to have hidden his gold coins in iron pots surrounding his property. Though Lassen had a lifetime of financial difficulties, the legend continues. The buried cache is thought to be in Deer Creek Canyon near Vina, California or somewhere along the Lassen Trail which follows Deer Creek.

Some twenty years after Lassen’s death, a miner named Obe Leininger found a gold-flecked ledge of gold in the same area. In order to find it again, he marked the spot by burying his pick in the trunk of a nearby tree. When he returned, however, he was unable to find the tree with the pick, though he searched the area diligently. Though he and others who had heard his tale continued to search the area for years afterward, the gold ledge was never found again. The location of the ore was said to be between the mouth of Calf Creek and the Potato Patch campground of the U.S. Forest Service, just beyond Deer Creek.

Trinity County – In 1862, the sheriff of Trinity County was not only responsible for upholding the law but was also tasked with collecting taxes. On one occasion as he was traveling through the area, his saddlebag was filled with about $1,000 in gold coins and $50 gold slugs. As the sheriff and his horse were cautiously crossing a stream, the horse stumbled and the saddlebag filled with gold was dropped and washed down the creek. Though the lawman made an immediate search of the area, he was unable to find the bag. Soon, the county offered a reward of $250 for the recovery of the saddlebag, but despite diligent search efforts, including damming up the creek, it was never found. In those early days of California, gold slugs were often minted by assayers and private mines. Today, in addition to their gold value, they have also become major collectible items, and if the treasure were to be found today, some estimate it could be worth as much as a million dollars. The creek was located near Weaverville, California. 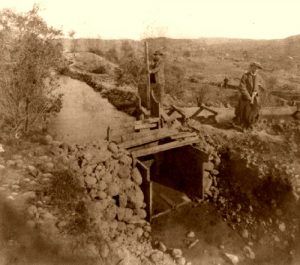 Yuba County – During California’s Gold Rush days, a prospector by the name of Bill Snyder was one of the lucky ones. Working a claim along on of the branches of Oregon Creek on a ridge behind Camptonville, he consistently brought out large quantities of gold. Just as the gold was almost exhausted, Snyder became seriously ill and knowing he needed medical attention, he buried his gold, estimated at $30,000, between 2 large pine trees in the flat area below his cabin. He then left his cabin to seek a doctor. Though the type of illness is unknown, it was evidently very serious, as he was unable to return home for over a year. Imagine his distress when he returned to the site to find his cabin and the two large pine trees gone, replaced by a sawmill that now stood in its place. Only stumps of trees remained and though he searched diligently in the area, he was never able to locate his buried gold. He later died in the county home and to this day the hidden cache has never been found.

2 thoughts on “More California Treasures Just Waiting To Be Found”