However, Webb City’s boom days were nearing their end. When the war ended in 1918, the mining industry declined because of the low price of ore and the discovery of richer ore pockets in Oklahoma. However, Webb City’s citizens diversified into industrial and agricultural production. A number of factories were enticed to come to the city including those producing leather, shirts, shoes, cigars, boxes, caskets, and other products. They did such a good job that in 1920, the city attained the distinction of increasing her industries more than any other city in the United States, with an increase of 250 percent. The area also expanded into the gravel industry, shipping countless tons of gravel, chat, and sand all over the country. In the 1930s and during World War II, explosives were manufactured by powder plants located near Webb City.

In the meantime, automobiles and buses had taken over the roads, bringing an end to the streetcar era. The Southwest Missouri Electric Railway discontinued all of its routes in 1939. Though mining continued for some years, after World War II, it ceased altogether. 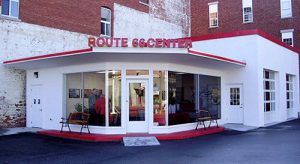 In 1926, Route 66 was established, which ran right through Webb City’s downtown area. After World War II, people began to travel as they never had before, and all manner of business sprang up to accommodate the traffic along the popular highway.

After mining was discontinued, Webb City continued to diversify, but, the city suffered, losing population and a number of businesses throughout the years. Recent years; however, have once again seen the city thriving with new businesses and a new generation of Route 66 travelers. Today, the town is called home to about 11,000 people.

The old Mother Road runs right through downtown Webb City and is prominently marked. Several historic buildings can be seen and the Route 66 Center, located in a renovated old gas station sits at the corner of Webb and Broadway Streets. The  Center provides information, Route 66 displays, and offices for the Chamber of Commerce. The focal point is a mural by Mayor John Biggs, measuring 8 feet tall and 16 feet wide, that depicts 1940s travelers along old Route 66. Visitors can also see movies at the Route 66 Theater, located at 24 S. Main one block off of Route 66. The theater is situated in the historic Newland Hotel building. 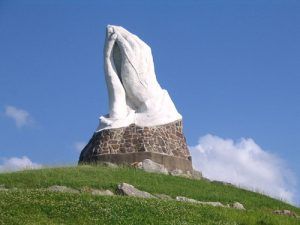 While traveling through Webb City, keep your eyes open for several beautiful murals painted by local artists, and a 30-foot oil painting depicting the city’s history hangs inside the Webb City Bank. The city is filled with historic Victorian architecture and two distinctive art pieces can be seen at the southern end of Main Street – the Kneeling Miner and the Praying Hands, a statue that stands 32 feet high and weighs over 100 tons. The Praying Hands are perched on a hill in King Jack Park, just behind the railroad tracks. At the park, visitors can also see the Southwest Missouri Electric Railroad Association’s trolley, the Mining Days Community Building and Amphitheatre, the old trolley depot, which houses the Chamber of Commerce; the powerhouse, and Employee Clubhouse, which houses the Webb City Historical Society.

The city also pays homage to its war heroes in three locations. In Mt. Hope Cemetery is outdoor chapel and Veteran’s Memorial inscribed with the names of the 77 Missouri Congressional Medal of Honor recipients; in Memorial Park is a World War II Memorial bearing the names of those Webb City servicemen and women who lost their lives in our wars; and, just west of the Praying Hands, a WW II howitzer stands in silent vigil over the memories of those who have served their country.

After seeing all the sights of Webb City, Route 66 continues south on US-71 Business Route (Madison Street) into Joplin, Missouri, the self-touted lead mining capital of the world.