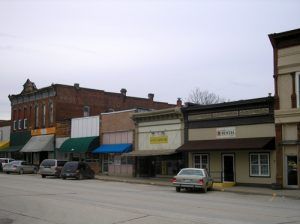 A sleepy little town today, with a population of some 850 people, this has not always been the case as the community was on its way to becoming an important port city at one time.

Before the town was founded, the site, situated on the Osage River, was just downstream from the main villages of the Osage Nation and the area was often frequented by the tribe, who had made their home in the area for centuries.

However, things would begin to change for the Osage Indians when the United States government took control of the Louisiana Purchase in 1804 — territory previously held by the French and Spanish.

Unlike the French who had successfully traded with the Osage, American settlers demanded protection from the Indians, who were known for their skill with both horses and guns.

In 1808 and 1825, the Osage had been convinced to sign treaties with the government, giving up all of lands in present-day Missouri and parts of Arkansas, Kansas, and Oklahoma. In 1872, they traded their remaining Kansas lands for the present reservation in Oklahoma.

As more and more settlers moved into the area, the town that would later be known as Osceola was founded in the mid-1830s. The first house was built in the winter of 1835-36. The logs were cut by Sanders Nance and his slave, Martin, and hauled to the bluff. However, a dispute soon erupted between Nance and a man named Phillip Crow as to whose land it was. Nance backed off and Crow built the house. He was soon joined by a man named Richard P. Crutchfield, and the spring of 1836, the pair opened the first store on the banks of Osage River called the “Crossing of the Osage at Crow and Crutchfield’s.”

Crow and Crutchfield were soon joined by the Cox brothers — Pleasant, Joseph and William, who opened the second store in the settlement.  More and more people continued to come to the area, with James Gardner opening a log tavern, John W. Bridges establishing a blacksmith shop and Pleasant Cox opening a sawmill, all in 1837. The following year, Phillip Crow expanded his business dealings by building a ferry across the Osage River. A post office was also established in 1838.

New settlers continued to come, primarily supported by agriculture, timber, and livestock. In 1839, the town adopted the name of the famed Seminole leader, Osceola, who had died in South Carolina two years earlier. David Corbin and his son built the first frame building in the town in 1839, which was soon occupied as a tailor shop run by a Frenchman named Ernest Lemming.

On January 29, 1841, St. Clair County was formed from Rives (later Henry) County and named for Arthur St. Clair, a Revolutionary War general. After a bitter contest and numerous debates, Osceola became the county seat in November 1841, a designation it continues to hold today.

The first courts of St. Clair County met in homes before a courthouse was built in 1842. The building was a two-story structure, described as having a tin roof, a parapet around its roofline, and plank floors were situated on the town square.

Beginning in the early 1840’s, small steamboats began to ascend the Osage River, making Osceola an important port, as it was situated at the head of the navigatable waters. Acting as a transfer point between the steamboats and wagon trains, sometimes as many as 100 wagons would be lined up to obtain supplies. 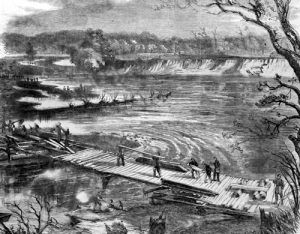 In 1848, Osceola gained its first newspaper called The Whig, established by a man named P.C. Davis. By 1850, the town had grown large enough that the Commercial Hotel was built that was first called the Pollard House and the Union Inn.

By the mid-1850’s western Missouri was suffering from the results of what is known as the Kansas-Missouri Border War. Years before the Civil War began, pro-slavery factions of Missouri were actively fighting against “free-staters” in newly developed Kansas Territory as to whether the state would join the union as a free or slave state.

As a result, warfare developed all along the border counties of both states. These “unofficial soldiers” who fought in the skirmishes in guerilla-type warfare were referred to as Jawhawks or Redlegs on the Kansas side and  Missouri bushwhackers, ruffians or raiders in the “Show Me State.”

When the Civil War officially erupted, Missouri joined the Union side of the conflict but was filled with residents who supported the Confederate cause. Many of those who had emigrated to Osceola were of southern origin and General James H. Lane, a controversial Union leader from Kansas, had heard that Confederate supplies and money were being held there.

The Sacking of Osceola

After the Battle of Wilson’s Creek, Missouri on August 10, 1861, the Union army retreated, leaving the Kansas border exposed. To combat this, General James H. Lane organized his men led them into action against a Confederate general, Sterling Price, in the Battle of Dry Wood Creek on September 2, 1861. Though his troops lost the battle, Lane continued on, fighting and pillaging in the towns of Paninsville, Butler, Harrisonville, and Clinton, Missouri, before he finally came to Osceola on September 23, 1861.  At that time, Osceola was a prosperous town of over 2,000 people, though the vast majority of its able-bodied men were off to war.

After exchanging a few shots with some Confederates on the outskirts of town, Lane’s Brigade entered the settlement with two pieces of large artillery and immediately began to ransack it, starting with the bank. After blowing open the safe, they were disappointed to find no money there, but only a few documents. Allegedly, the citizens of Osceola, having heard of the incoming soldiers, had hidden the money before their arrival. Sentries were posted at the town entry points to stop any help from approaching and anyone daring to do so, was fired on immediately.

Enraged, Lane ordered his men to pillage and burn the entire town. The courthouse was broken open and the county records destroyed, stores and private homes were pillaged and torched, and buildings were bombarded with cannon balls. It was not long before the city was a smoking mass of ruins.

If this was not enough of an atrocity, twelve men were given a farcical trial and shot on the town square. These men, who had tried to defend the town, were “convicted” of treason and condemned to death by firing squad, of which Lane himself took part. Amazingly, three of them would survive, but Lane was not aware of this or he probably would have returned to kill them.

Finally, Lane’s men brought their frenzy of pillaging and murder to a close by celebrated by getting drunk, so much so, that according to reports, many of the men were unable to march when it came time to leave many and had to ride in wagons and carriages. With them, they took their plunder including Lane’s personal share, which included a piano and a quantity of silk dresses. The troops then continued to Kansas City, Missouri. The settlement suffered more than $1,000,000 worth of damage including that belonging to pro-Union citizens.