The sacking of Osceola, Missouri

Lingering fury regarding the Osceola Massacre stirred hatred in many a Missouri citizen and would become one of the causes for William Quantrill’s raid on Lawrence, Kansas two years later on August 21, 1863.

Lane was severely criticized for his actions in Osceola, most severely by General Henry Halleck, Commander of the Department of Missouri, who believed that the attacks made by Lane and Colonel Charles Jennison, aggravated anti-Union sentiments in Missouri and intensified resistance to federal authority in the state. Of their actions, he would state: “The course pursued by those under Lane and Jennison has turned against us many thousands who were formerly Union men. A few more such raids will make this State unanimous against us.” Thus, Lane’s Brigade was ended.

Two years later, when William Quantrill attacked Lawrence, Kansas in what has become known as the Lawrence Massacre. Confederate guerillas could be heard shouting, “Remember Osceola!” Though Lane was in residence in Lawrence at the time, he was able to escape the attack by racing through a cornfield in his nightshirt.

By the time the Civil War had ended, Osceola, like other Missouri towns, was devastated – its buildings in ruins and its population reduced to just about 200 people. Though some rebuilding occurred, including a new courthouse and the Commercial Hotel in 1867, it would not see prosperous days again until the Kansas City, Osceola, and Southern Railroad began to make its way to the community.

In the meantime, many of those who had served in the Civil War were embittered and turned to outlawry, including the famed Younger Brothers of Lees Summit, Missouri and the James Brothers from Kearney, Missouri. The Osceola area was a frequent hideout of these young men, who were known to have often stayed at the Commercial Hotel. 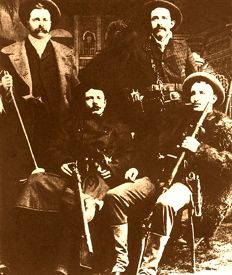 In March 1874, Jim and John Younger were in the area, fleeing from Pinkerton agents who were hot on their trail. Two agents by the names of Captain Louis J. Lull (aka: W.J. Allen) and John Boyle (aka: James Wright) had arrived in St Clair County early in the second week of March, taking rooms at the Commercial Hotel. There, they met up with Osceola Constable, Edwin Daniels, who agreed to serve as a guide for the agents.

The three soon set out searching for the outlaws. On March 16th, they spent the night at the Roscoe House in Roscoe, some 10 miles southwest of Osceola. The next afternoon, they started toward the farm of Theodrick Snuffer, a family friend of the Youngers, just a few miles out of town. 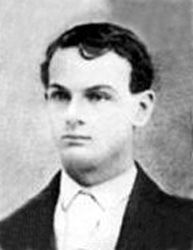 Posing as cattlemen, they approached the Snuffer home, ostensibly to inquire about directions. Little did the lawmen know that Jim and John Younger were hiding upstairs, watching their every move.

When the agents left, the suspicious Younger brothers followed them. On the road between Roscoe and Osceola, Jim and John approached the three men and John Boyle immediately fled. Jim took a shot at him, but the bullet succeeding only in knocking off the agent’s hat. The Youngers then disarmed Lull and Daniels, but unbeknownst to them, Lull had a small pistol in his pocket which he pulled and shot John Younger in the neck. John, who was holding a double barrel shotgun, instinctively fired back, hitting Lull’s shoulder and arm with buckshot. Lull and Daniels both fled at that point, but Jim Younger Younger shot and killed Daniel, while the wounded John, pursued Lull and fired at him with his pistol. After Lull went down severely wounded, John made his way towards his brother Jim, where he fell from his horse and died. Agent Lull would also die from his wounds three later. In the meantime, Jim was able to make his escape and John was buried at the Yeater Cemetery in an unmarked grave.

Finally, the town of Osceola would once again see prosperity when the Kansas City, Osceola, and Southern Railroad began to make its way to the community. The building of the railroad itself provided jobs to area residents and when it was completed to Osceola in 1885, the town began to thrive through agriculture, mining, and lumbering. 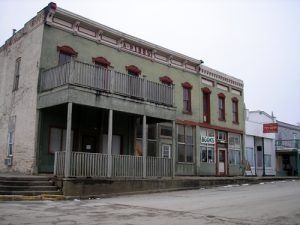 By the turn of the century, the town’s population had reached about 1,200 people and included several industrial businesses such as a flour mill, a sawmill, a cheese factory, a fruit cannery and large kilns producing a superior lime, and several rock quarries.

At about this same time, the town’s second courthouse was being questioned as being structurally unsafe. Despite the concerns; however, it would continue to be used for several years until it was finally vacated in 1908. Though several attempts were made to raise tax money to build a new courthouse, voters were not willing to spend the money for a new building and county officials were housed in various structures throughout the town. It wouldn’t be until 1920 that a new courthouse was partially finished enough to accommodate employees. It was finally completed in 1923 and continues to stand today.

Today, Osceola continues to be the county seat of St. Clair County and sports a population of just under 1,000 people. The small town provides a wealth of history and many of its buildings surrounding the square, continue to display late 19th Century architecture. In the cemetery is a monument to the men killed in the Sacking of Osceola. Nearby, can be found numerous recreational opportunities at Truman Lake. The town is famous for the Osceola Cheese Company, which not only provides various types of locally made cheeses, but also dressings, sauces, and preserves. Another interesting stop is the old Commercial Hotel, built in 1867, which not only hosted the likes of the James-Younger Gang but is also allegedly haunted — but that’s a whole ‘nother story. 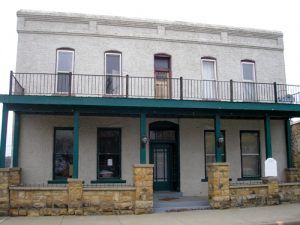 The Commercial Hotel, built in 1867, once housed members of the infamous James-Younger Gang.

Historic Accounts of the Osceola Massacre