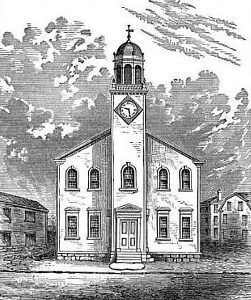 Salem Towne – The county seat of Essex County, Salem was the scene of the witchcraft trials in 1692. Many of those that were accused spent months in Salem’s jail and those that were condemned were hanged on Gallows Hill. Salem was founded by a company of fishermen from Cape Ann led by Roger Conant at the mouth of the Naumkeag River in 1626. This was the site of an ancient Native American village and trading center that was called Naumkeag. The settlement was renamed Salem when it was incorporated in 1629. Salem originally included much of the North Shore, including Marblehead. Middleton, Topsfield, Wenham, and Manchester-by-the-Sea. The people who originally came to Massachusetts were English Protestants, called Puritans, who had immigrated to obtain religious freedom. These religious folks; however, were very harsh, with laws and punishments that included fines, deprivation of property, banishment, imprisonment, and execution. Puritans also generally believed witchcraft to be real which caused much fear if people appeared to be possessed by demons, and witchcraft was a serious felony.

Once people settled in Salem Town, they found the ground not very fertile so many settlers moved outside the “city” and numerous small communities emerged including Salem Village, which was permanently settled in 1636. The villagers called the larger community of Salem — “Salem Towne” to differentiate it from their village. The witch hysteria of 1692 was a series of accusations, hearings, and prosecutions of people accused of witchcraft in colonial Massachusetts, between February 1692 and May 1693. Despite being generally known as the Salem witch trials, the preliminary hearings in 1692 were conducted in a variety of towns across the province including Salem Village (now Danvers), Ipswich, and Andover. The hysteria began in Salem Village, which, at the time, was known for its many internal disputes, including arguments about property lines, grazing rights, church privileges, and challenges with the church in Salem Town. But, as the community was but a parish of Salem, and didn’t have its own government, most of the legal actions quickly moved to the larger city, where the court, authorities, and prison were located.

After the witch frenzy was over, Salem Towne continued to prosper and during the American Revolution, it would become a center for privateering. One peace was declared, the city became very active in overseas trading and its seaport would become one of the most significant in early America.

Today, Salem is a residential and tourist area which includes the neighborhoods of Salem Neck, The Point, South Salem and North Salem, Witchcraft Heights, Pickering Wharf, and the McIntire Historic District. There are a number of landmarks of the notorious witch trials as well as museums, tours, and attractions that expand on the history. Related spots include: The Witch House, also known as the Corwin House, where witch trials Judge Jonathan Corwin lived. The only remaining structure with direct ties to the trials, it is a museum today. Other sites include the Old Burying Point, Gallows Hill, the Salem Witch Trials Memorial, the Peabody Essex Museum, the Salem Witch Museum, the Wax Museum of Witches & Seafarers and the Witch History Museum.

Though a great fire swept through the town in 1914, destroying some 400 buildings and leaving some 3,500 families homeless, the city still includes hundreds of remarkably well-preserved structures that are on the state and national registers of historic places. The city is called home to about 41,000 people today. 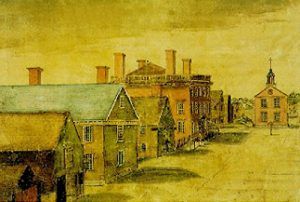 Salem Village – Once people settled in Salem Towne, they found the ground not very fertile so many settlers moved outside the “city” and numerous small communities emerged including Salem Village, which was permanently settled in 1636. Located about five miles north of Salem Towne, the settlement grew over the years and by the 1670s, the villagers were requesting the right to build their own church, which was granted in 1672. This was not only the beginning of some autonomy for the village; but, also the start of major infighting among the townsfolk, which would last over the next two decades. The dissension grew so bad over time that it would divide the community, making enemies of friends and family members. It was against this backdrop that the infamous Salem witch hunt and trials would begin in 1692.  See Full Article HERE.

Salisbury – Situated on the Atlantic Ocean north of Boston in Essex County, this area was once the territory of the Pentucket tribe of Pennacook Indians. On September 6, 1638, the secretary of the Massachusetts Bay Colony, Simon Bradstreet, was granted the right to him and eleven other men to begin a plantation north of the Merrimack River. This land grant included what are now the towns of Amesbury and Merrimack, Massachusetts as well as the New Hampshire towns of Seabrook, South Hampton, Newton, Hampstead, Plaistow, and Kingston. The settlement was first called Colchester, but when it was incorporated the next year, it was renamed Salisbury, after Salisbury in Wiltshire, England. The original residents were given one lot near the center of town, where they could build a house, plus a larger planting lot just outside the center for farming. Families also owned large sections of “sweepage lots” near the beach, where they harvested the salt marsh hay.

Salisbury Beach in the early 1900s

The original roads at the center of the town formed a compact semicircle, which allowed the residents to quickly reach the garrison house in case of Indian attacks. One of the two greatest fears at the time was the Naumkeag tribe of Indians, thus the men of the town took turns standing watch against a surprise attack, especially at night. The Naumkeags, however, had been decimated by the plague, and the threat was not what they thought it might be. The second threat came from wolves, which were plentiful, and would often kill the settlers’ livestock.

One of the original founding families of the settlement were Richard and Ursula North, who had immigrated from England with their children. In 1639, they lived with the other settlers on plots along the “circular road” in the center of the village. Richard’s daughter, by his first marriage, was Susanna North Martin, who would be accused and hanged for witchcraft during the hysteria of 1692. Though she lived in Amesbury at the time of her accusation, another Salisbury resident would play a key part in her trial.

Robert Pike, one of the founders of Salisbury and a prominent man who held a number of political positions over the years was responsible for recording much of the testimony against Susanna North Martin, who would be executed for witchcraft on July 19, 1692. However, Robert Pike would later become a vocal opponent to the entire affair when accusations were made against Mary Perkins Bradbury, whose son was married to Pike’s daughter. In August 1692, he wrote a forceful letter to Judge Jonathan Corwin attacking spectral evidence. As long as spectral evidence was admissible in court, he wrote, “the Devil is accuser and witness.”

After the whole witch affair, Salisbury continued to grow, profiting from its upland farms, boat building, and its position on a major overland trade route to the north. Years later it would become a haven for vacationers. Today, Salisbury continues to be highly diverse geographically, encompassing sixteen square miles of farms, beach, marshlands and both residential and commercial space. Now supporting a neighborhood of restored antique homes and riverfront marine businesses, it is called home to about 8,000 people.