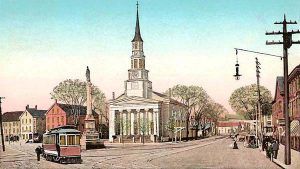 Peabody – A suburb of Salem Towne, Peabody was first known by several names when it was settled in about 1626, including Northfields, Salem Farms, and Brooksby. It was settled at the same time as Salem Town and for more than a century would simply be just another part of the city. In 1752, the area was set off from Salem and incorporated as part of Danvers, which was once Salem Village. Then, it was usually referred to as “the South Parish,” associated with the church located in the center of town (now Peabody Square). In 1855, the community broke away from Danvers to become the town of South Danvers. The name was changed in 1868 to Peabody after George Peabody, a noted local philanthropist who was born in South Danvers (now Peabody) in 1795. George Peabody donated the money that built the Peabody Institute Library on Main Street in Peabody, and later the Peabody Institute Library in Danvers as well as many other libraries and schools throughout the country. Peabody has long been known as the “Tanner City” because its growth and development depended on the success of the local leather industry. Although most of the leather-related businesses have moved out of the area, the city retains the nickname. It is located just two miles northwest of the city center of Salem, and about five miles south Danvers.

During the witch hysteria of 1692, three of the town’s first residents — Giles Corey, and John Proctor  — were found guilty and condemned to die for witchcraft. John Proctor’s wife, Elizabeth, was also found guilty and sentenced to hang; but, received a reprieve because she was pregnant. 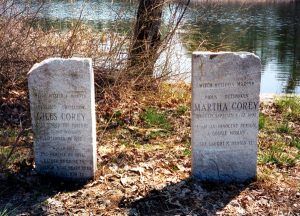 Giles and Martha Corey’s graves sit near their original homestead by Crystal Lake in west Peabody.

At that time, Peabody was still part of Salem Town. Giles Corey owned a large farm in the area of what is now Pine Street across from the old Post Office at the railroad crossing. Giles was pressed to death with stones after refusing to make a plea in his accusation of witchcraft. His wife Martha was also executed by hanging for being a witch. Their graves sit near their original homestead by Crystal Lake in West Peabody.

John Proctor an early opponent of the witch hunt, was also hanged during the witch hysteria of 1692. He too owned a large farm in what is now Peabody and the house that he once lived in continues to stand. John and his wife, Elizabeth Bassett Proctor, would both be found guilty and condemned to hang. John’s sentence was carried out n August 19, 1692, but  Elizabeth was given a reprieve because she was pregnant. She would later be released and remarry. Their children, Sarah and William Proctor, as well as  John’s oldest son, Benjamin Proctor, from his first marriage, would also be accused. Also living in the house was a servant named Mary Warren, who would become one of the so-called “afflicted girls.” Privately owned today, the house is located at  348 Lowell Street. A stream runs behind the house that is known today as Proctor Brook.

Today, Peabody is known for its diversity, natural beauty, historical and cultural amenities. It is called home to about 52,000 people. 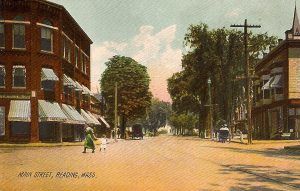 Reading – Pronounced like “red-ing”, this city, situated in Middlesex County, Massachusetts is just about ten miles north of central Boston. In the 1630s, the original settlers of Massachusetts arrived establishing the Massachusetts Bay Colony. Nine years later, in 1639, some citizens of Lynn petitioned the government of the colony for a “place for an inland plantation”. They were initially granted six square miles, followed by an additional four. The first settlement in this grant was called “Lynn Village” and was located on the south shore of Lake Quannapowitt. On June 10, 1644, the settlement was incorporated by the House of Deputies as the Town of Reading, taking its name from Reading, England.

The first church was organized soon after the settlement, and the first parish, later known as South Reading, became Wakefield in 1868. A special grant in 1651 added land north of the Ipswich River to the Town of Reading. This area would later become the separate Town of North Reading in 1853. John Parker was one of the founders of Reading and served as a deacon of the 12th Congregational Church (now the First Parish Congregational Church), which he also was instrumental in establishing. He would also serve as a selectman, constable, and a judicial commissioner.

When the witch hunts of the area began in 1692, there were a number of people accused in Reading including several members of the Dustin family. The first to be arrested was the widow, Lydia Dustin. Though she was never tried and was eventually found to be not guilty, she died in prison before she could be released. Later, her daughters, Sarah Duston and Mary Colson were also arrested. Though a warrant was issued for her granddaughter, Elizabeth Colson, Constable John Parker was unable to find her, reporting to the court that she had escaped and was likely in Boston preparing to leave the country. Also arrested were Mary Harrington Taylor, Jane Lilly, and Sarah Davis Rice. No one from Reading was found guilty of witchcraft. Today, though Reading is located near Boston, it continues to have a small-town feel. It is called home to almost 25,000 people. 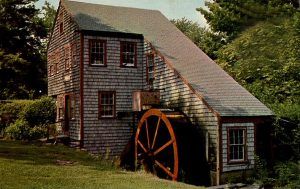 Rowley – Situated in Essex County, Rowley was first settled in the spring of 1639 as a plantation by Reverend Ezekiel Rogers. As more people came to the area, the town of Rowley was incorporated the following spring, which at that time also included portions of modern-day Byfield, Georgetown, and Haverhill. The town was named after Rowley, Yorkshire, England where Rogers had served as pastor for twenty years before coming to the United States. That first year, a church was built and the Reverend Rogers became its pastor in December. In the early 1640s, two mills were built and the town soon became known for its hemp, flax, and cotton cloth. In 1642, a Keystone arch bridge and a dam were built on the Mill River. The first stone arch bridge in North America, it was constructed entirely of hand-chiseled granite and contained no mortar. It was rebuilt in the mid 19th Century. In 1669, a sawmill was established, which is still in business today.

In 1675, the westerly section of the Rowley, known as the “Merrimack Lands,” or “Rowley Village by Merrimack,” which began to be settled in about 1650, was incorporated as a separate town called Bradford. By 1680, Rowley was called home to about 129 families. In 1685, the southwestern section of the town, long known as “Rowley Village,” was incorporated as the town of Boxford. In 1689, several Rowley men were ordered to the defense of Haverhill and Dover against the Indians; but, it is not known that any of them were slain. In 1690, when Sir William Phips led an expedition against Quebec during King Phillip’s war, Rowley furnished one captain, Philip Nelson, one lieutenant, and thirty other men. Of these, John Bailey and Moses Wood died on their way to Canada.

When the witch hysteria broke out, Rowley had its share of accused including John Howard, John Jackson, Sr., John Jackson, Jr., who were thought to have been related to Elizabeth Jackson Howe of Topsfield, who had been found guilty and hanged July 19, 1692. Also accused was Mary Post, who was the daughter of  Mary Tyler Post Bridges, of Andover, who had also been accused of witchcraft. But, Rowley’s saddest loss was Margaret Stevenson Scott, an impoverished woman in her 70’s, who was hanged on September 22, 1692.

A month later, Rowley would see more turmoil on October 23rd, when Rowley suffered its only Indian raid. In what was then called Byfield Parish, and now called Georgetown, Benjamin Goodrich, his wife and two of his daughters were killed by the Indians. Another daughter named Deborah, aged seven was taken captive but redeemed at the expense of the province the next year.

Today, this small town of about 5,500 people is filled with colonial homes, mixed with later architectural styles.