1700 – Abigail Faulkner, Sr. requests that the Massachusetts General Court reverse the attainder on her name.

A book completed in 1697 by Beverley minister John Hale about the trials was published posthumously as A Modest Inquiry Into the Nature of Witchcraft.

August 25, 1706: Ann Putnam, Jr., in formally joining the Salem Village church, publicly apologized “for the accusing of several persons of a grievous crime, whereby their lives were taken away from them, whom, now I have just grounds and good reason to believe they were innocent persons…”

1703 – The Massachusetts Legislature passed a bill disallowing the use of spectral evidence in court trials. The bill also restored citizenship rights (“reversed attainder,” which would allow those individuals or their heirs to exist again as legal persons, and thus file legal claims for return of their property seized in the trials) for John and Elizabeth Proctor and Rebecca Nurse, on whose behalf petitions had been filed for such restoration.

Abigail Faulkner, Sr. petitioned the court in Massachusetts to exonerate her of the charge of witchcraft. The court agreed in 1711.

February 14, 1703 – Salem Village church proposed revoking the excommunication of Martha Corey; a majority supported it but there were there were 6 or 7 dissenters. The entry at the time implied that therefore the motion failed but a later entry, with more details of the resolution, implied that it had passed.

The Massachusetts legislature also gave compensation to the heirs of 23 of those convicted, in the amount of £600. One of the largest settlements went to William Good for his wife Sarah — against whom he had testified — and their daughter Dorcas, imprisoned at 4 years-old. He said that the imprisonment of Dorcas had “ruined” her and that she had been “no good” after that.

1716 – England held its last trial for witchcraft; the accused were a woman and her 9-year-old daughter.

1718 – Philip English’s legal claims, for compensation for seizure of his property during the witch trials, were finally settled.

1736 – England and Scotland abolished witchcraft prosecution on the order of King George II. 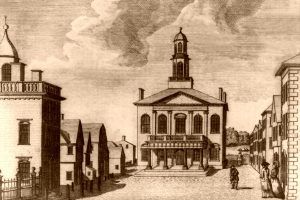 1752 – Salem Village changed its name to Danvers; the King overruled this decision in 1759 and the village ignored his order.

1957 – Massachusetts formally apologizes for the events of 1692. The remaining accused who had not been previously legally exonerated were included in an act clearing their names. Although only Ann Pudeator was mentioned explicitly, the act also exonerated Bridget Bishop, Susannah Martin, Alice Parker, Wilmot Redd and Margaret Scott.

November 16, 1988 – The Boston City Council recognized the injustice done to Ann Glover 300 years earlier, and proclaimed that day “Goody Glover Day”, condemning what had been done to her.

1992 – On the 300th anniversary of the trials, a witchcraft memorial designed by James Cutler is dedicated in Salem.

The “Witches” of Salem, Massachusetts

The Afflicted Girls of Salem Village

Villages of the Salem Witch Trials