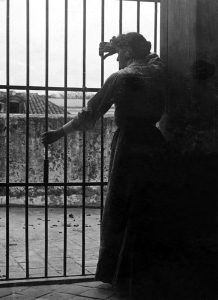 Elizabeth Hutchinson Hart (1622-1700) – Accused and imprisoned during the Salem witchcraft trials, Elizabeth was born in Suffolk, England in 1622 to Thomas and Anne Browne Hutchinson. Somewhere along the line, she obviously immigrated to the United States, as she married Isaac Hart in about 1650. She was living in Lynn, Massachusetts when she was accused and arrested for witchcraft, having allegedly afflicted Mary Walcott, Abigail Williams, Mercy Lewis, and Ann Putnam, Jr. It is not known if she was ever indicted, but she was sent to prison in Boston on May 18, 1692, and held there until December.

Sarah Hawkes (1671-1716) – The daughter of Adam and Sarah Hooper Hawkes Wardwell, Sarah, Jr. was born in Lynn, Massachusetts in 1671. Shortly after she was born her father died, and her mother remarried Samuel Wardwell of Andover. After her step-father, Samuel Wardwell was accused and arrested for witchcraft, Sarah, along with her mother, Sarah Hooper Hawkes Wardwell, and half-sister, Mercy Wardwell, would also be accused and imprisoned. Her step-father, Samuel Wardwell would be hanged on September 22, 1692. Though she, her mother, and her sister would remain in prison for a time, they would later be released.

Hobbs Family – The Hobbs family were from Casco, Maine, the frontier of the Massachusetts Bay Colony, during a time when there were many attacks by the Wabanaki Native Americans. Due to the many attacks in the area, the family had relocated to Topsfield, on the edge of Salem Village. William and Deliverance Hobbs were not church members and their daughter, Abigail, had a reputation for being wild, apparently roaming the forests at night, and described as being irreverent and disrespectful. She would brag that she was not afraid of anything and was known to mock the holy sacrament of baptism by sprinkling water on her mother’s head and reciting the appropriate words. All three were accused of being witches by Marcy Lewis, who was also from the same area in Maine. Seventeen-year-old Abigail Hobbs was the first arrested on April 18, 1692, and Deliverance and William were arrested three days later.

For a while, Abigail professed her innocence, but after a time, her resistance and her will were broken by the harshness of the proceedings and she began to confess to practicing witchcraft by afflicting Mary Lewis, acted as a witness against her parents, and made accusations against others including John Proctor. Deliverance Hobbs, about 50 years old at the time of the trials, also confessed to practicing witchcraft and even acted as a witness against her husband, who never swayed from his claims of innocence. Despite the circle of accusations in the family, all three Hobbs managed to avoid hanging. In 1710, William Hobbs, petitioned the General Court to compensate him for £40 expenses that the family’s imprisonment cost him but, said he was willing to accept it.

John Howard (1645-??) – Of Rowley, Massachusetts, John Howard, was accused, along with John Jackson, Sr. and John Jackson, Jr., by Susanna Post as witches. All three were laborers in Rowley and thought to have been related to Elizabeth Jackson Howe, who was hanged on July 19, 1692 for witchcraft. A complaint was filed by Joseph Tyler and Ephriam Foster alleging that the three had committed acts of witchcraft against Rose Foster and Martha Sprague of Andover. A warrant was issued for their arrests on August 25, 1692. They were examined by Magistrate Hawthorne and others who issued an indictment and all three men were imprisoned. However, beyond their imprisonment, no other information is known.

Elizabeth Jackson Howe (1635-1692) – Born to John and Katherine Jackson in England in about 1635, she was little more than a year old when her parents immigrated to the United States. Upon their arrival, the couple settled in Rowley, Massachusetts. By the age of seven, Elizabeth was already described as a maid who worked in the Reverend Ezekiel Rogers house. She married James Howe in April 1658, who came from the nearby village of Ipswich. The couple would have five children and resided in Topsfield, Massachusetts. Though her husband James was blind, they seemed to have been successful farmers. Elizabeth was known to have been an assertive personality, which probably made her unpopular in the pious community. Elizabeth’s problems first started in 1682 when she was 45 years old, at which time a young girl in the community named Hannah Trumble started having fits, in which she sometimes accused Elizabeth Howe of using witchcraft to make her ill. Though nothing came of this accusation, the damage was done and Elizabeth’s reputation was tarnished. Afterward, she was refused admittance to Ipswich church. 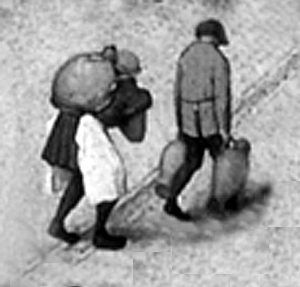 Ten years later, during the witch frenzy of 1692, Elizabeth would find herself accused again. On May 28, 1692, a warrant was issued for her arrest for witchcraft acts committed against Mary Walcott, Abigail Williams, and others of Salem Village. She was arrested the next day by Topsfield Constable Ephraim Wildes and taken to the home of Lieutenant Nathaniel Ingersoll to be examined. During her examination, Mercy Lewis and Mary Walcott, two of her main accusers, fell into fits and when Elizabeth looked at Mary Warren, she violently fell down. Ann Putnam Jr. and Susannah Sheldon would also testify against her. When asked how she pled to the charges made against her, Elizabeth Howe boldly responded, “If it was the last moment I was to live, God knows I am innocent of anything of this nature”. On June 1st, testimony was taken from the Perely family of Ipswich, Massachusetts, who claimed that their ten-year-old daughter had been afflicted by Howe. The child complained of being pricked by pins and sometimes fell into fits. In their testimony against Howe, they quoted their daughter as saying, “I could never afflict a dog as Goody Howe afflicts me.”

On June 30th, Elizabeth was one of five women arraigned in the first Salem witch trial. During the proceeds, the Reverend Samuel Parris’ slave, John Indian cried out that she had bitten him and he fell into a fit. Despite strong support from family and friends, she and the other four women tried that day were all found guilty. On July 19, 1692, Elizabeth Jackson Howe, Rebecca Towne Nurse, Sarah Solart Poole Good, and Susannah North Martin were hanged on Gallows Hill in Salem Towne and buried in a nearby crevice.

Frances Alcock Hutchins (1612-1694) – Born in 1612, Frances grew up to marry a carpenter named John Hutchins and the couple would have eight children. They would later move to Haverhill. There, he also had a partnership in a sawmill and did some farming. Years previous to the witch trial hysteria, she had been brought before Court in 1653 for wearing a silk hood. In 1650, the General Court had passed a law prohibiting the display of finery by persons of meane condition; defined as persons whose property was valued under £200. The charges were dropped, when it was found that Frances’ was not of “meane condition,” and was “entitled” to wear the finery.

She would find herself before the court again after she was arrested on August 19, 1692, for the charge of witchcraft. The complaint was filed by Timothy Swan of Andover and Ann Putnam, Jr. and Mary Walcott of Salem Village. At the age of 80, she was imprisoned and would stay there until December 21, 1692, when she was bonded out. It doesn’t appear that she was ever tried. She survived the whole ordeal for another year and a half, dying in Haverhill on April 5, 1694.

13 thoughts on “Witches of Massachusetts – H”