Captain Floyd was in Governor Andros’ expedition of 1688 against the Indians to the east, and in 1689 was in command of a military post on the Saco River. In 1690 he was made captain of a troop and stationed at Portsmouth, and for about three years after this, he saw service against the Indians in what was called King Phillips War. It was his ties to Maine during this war that most likely made him a target of Salem accusers. Some of these young girls had been orphaned during an Indian attack in 1690 at Saco, Maine. Captain Floyd and other military men had connections with some of the local Indians, often trading with them, which was seen by the young girls of Salem Village as scandalous. In late May 1692, a number of people from Maine were charged with witchcraft, including Captain John Floyd. No examination records survive regarding Captain Floyd, but, he was obviously released at some point. He remained in Rumney Marsh until his death on February 1, 1701 (or 1702). He was buried at Lynn, Massachusetts.

Dana Michael Foley (16??-1692) – While hanged along with eight other people accused of witchcraft on September 22, 1692, we were unable to find any other information on this individual.

Elizabeth Betts Fosdick (1660-1716) – The wife of John Fosdick, a carpenter in Malden, a complaint of witchcraft was made against Elizabeth Fosdick on May 30, 1692, by Lieutenant Nathaniel Putnam and Joseph Whipple of Salem Village. She was charged with allegedly afflicting Marcy Lewis and Mary Warren. While it is known, that she was imprisoned, there is nothing more known of the disposition of the complaint.

Ann Alcock Foster (1617-1692) – The mother of Mary Foster Lacey, Sr, and grandmother of Mary Lacey, Jr., all three were accused of witchcraft. Born in 1617 to the Reverend Thomas Alcock and Ann Hooker Alcock, Ann came to Massachusetts from London in 1635. She then married Andrew Foster and settled in Andover, Massachusetts and the couple had five children. In 1692, when a woman named Elizabeth Ballard came down with a fever that baffled doctors, witchcraft was suspected, and a search for the responsible witch began. Two of the “afflicted girls” from Salem Village, Ann Putnam Jr., and Mary Walcott, were taken to Andover to seek out the witch and fell into fits at the sight of Ann Foster. Ann, 72, a widow of seven years, was arrested in July and taken to Salem prison. Ann resisted confessing to the “crimes” she was accused of, despite being tortured multiple times over a period of days. However, her resolve broke when her daughter Mary Foster Lacey, Sr., similarly accused of witchcraft, pointed the finger at her own mother in order to save herself and her child. The transcripts reveal the anguish of a mother attempting to shield her child and grandchild by taking the burden of guilt upon herself. She said: “Me and Martha Carrier did both ride on a stick or pole when we went to witch meetings at Salem Village.” Mary Walcott, Mary Warren, and Elizabeth Hubbard would add their accusation to the elderly Widow Foster. She was indicted and tried on September 17, 1692. She, along with her daughter, Mary Foster Lacey, Sr., tried on the same day, were both sentenced to hang. The executions of several others who were tried and condemned on that date were followed through on September 22, 1692. These included Margaret Stevenson Scott, Samuel Wardwell, Sr., Wilmot Redd, and Mary Ayer Parker. However, for whatever reasons, Mary Foster Lacey, Sr. and her mother Ann, would not be immediately executed. But, for Ann, it wouldn’t be enough. After spending 21 weeks in prison, she died there on December 3, 1692, before the trials were discredited and ended. Her daughter, Mary Foster Lacey, Sr., and granddaughter, Mary Lacey, Jr., would be spared. Ann’s son, Abraham, later petitioned the authorities to clear her name and reimburse the family for the expenses associated with her incarceration and burial.

Eunice Potter Frye (1641-1708) – Of Andover, Eunice was born to Luke and Mary Edmunds Potter on February 2, 1641, in Concord, Massachusetts. She grew up to marry John Frye and the couple lived in Andover. Though both she and her husband were solid members of the church and her husband a deacon, she was arrested for witchcraft in about September 1692. When another Andover woman named Mary Osgood was examined on September 8, 1692, she confessed under pressure and named Eunice Potter Frye, Abigail Barker, and Mary Lovett Tyler as having baptized her by the devil. There are no records of Eunice’s examination, but she would spend some 15 weeks in prison. After hers and several other arrests had taken place in Andover, the Reverend Francis Dane gathered dozens of signatures on petitions pleading for the release and innocence of the Andover accused. Specifically, speaking of Mary Osgood , Eunice Frye, Deliverance Dane, Sarah Wilson, and Abigail Barker, it would state: “…who are women of whom we can truly give this character and commendation, that they have not only lived among us so inoffensively as not to give the least occasion to any that know them to suspect them of witchcraft, but by their sober godly and exemplary conversation have obtained a good report in the place, where they have been well esteemed and approved in the church of which they are members.” Eunice Frye was later released under a £100 bond and does not appear to have ever been tried. She died on November 24, 1708, in Andover. 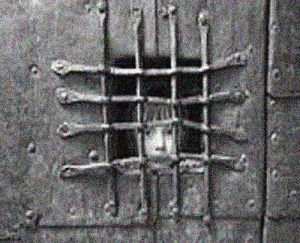 Dorcas Good (1678-17??) – Dorcas was the daughter of Sarah Solart Poole Good, one of the first three women accused of witchcraft during the hysteria of 1692. Sometimes called Dorothy in historical records, her father was William Good, who was a poor man and her parents lived a life of homelessness and begging, earning them a reputation as unsavory people. Her mother, Sarah Solart Poole Good, was accused of witchcraft on February 25, 1692, when Abigail Williams and Elizabeth Parris claimed to be bewitched under her hand. She was soon arrested and was tried for witchcraft on March 1st. She would never confess to any guilt. She was found guilty and sentenced to be hanged. However, Sarah was pregnant and her execution was delayed until she gave birth to her child.

In the meantime, her four-year-old daughter was also accused of practicing witchcraft in a complaint was filed by Edward Putnam and Jonathan Putnam of Salem Village. She was arrested on March 24, 1692, and taken to the house of Nathiel Ingersol to be examined. There, Mercy Lewis, Ann Putnam, Jr., and Mary Walcott would all testify that the small girl had afflicted them by pinching, biting, and choking them. Examined over several days, the little girl finally broke down crying and confessed and incriminated her mother. She was soon imprisoned with her mother at the Ipswich Jail. While imprisoned, Sarah Good gave birth to a daughter she named Mercy. But, the infant would die a short time later. While little Dorcas remained in jail, her mother was taken away and hanged on July 19, 1692. Because Dorcas’ father was a poor laborer, he would not be able to come up with the money to bond out his child for some time. Dorcas was in custody for over eight months, from March 24, 1692, when she was arrested until she was released on a £50 bond on December 10, 1692. She was never indicted or tried. After her release, she was never the same — psychologically damaged for the rest of her life. By some historical accounts, she was insane.