But, under the agreement of 1620 with their partners in London, which remained in force for seven years, the Plymouth people could neither divide their land nor dispose of the products of their labor, and so burdensome became this arrangement that in 1623, temporary assignments of land were made which became permanent the following year.

During the two years that followed, so evident was the failure of the joint undertaking that efforts were made on both sides to bring it to an end; for the merchants, with no profit from the enterprise, were anxious to avoid further indebtedness; and the colonists, wearying of the dual control, wished to reap for themselves the full reward of their own efforts. Under the new arrangement of small private properties, the settlers began to prosper. Though conditions were hard and often discouraging, the Pilgrims gradually found themselves self-supporting and as soon as this fact became clear, they sent Isaac Allerton to England to make an agreement with the financiers. The negotiations resulted in an agreement made, whereby eight leading members of the colony bought the shares of the merchants for £1800 and distributed the payment among the settlers, who at this time, numbered about 300. Each share carried with it a certain portion of land and livestock. The debt was not finally liquidated until 1642.

By 1630, the Plymouth colony was fairly on its feet and beginning to grow in “outward estate.” The settlers increased in number, prospered financially, and scattered to the outlying districts; and Plymouth the town and Plymouth the colony ceased to be identical. Before 1640, the latter had become a cluster of ten towns, each a covenanted community with its church and elder. Though the colony never obtained a charter of incorporation from the Crown, it developed a form of government arising naturally from its own needs. By 1633, its governor and one assistant had become a governor and seven assistants, elected annually at a primary assembly held in Plymouth town; and the three parts, governor, assistants, and assembly, together constituted the governing body of the colony. In 1636, a revision of the laws and ordinances was made in the form of “The Great Fundamentals,” a sort of constitution, frequently interspersed with statements of principles, which was printed with additions in 1671. The right to vote was limited, at first, to those who were members of the company and liable for its debt, but, later the suffrage was extended to include others than the first-comers, and in 1633 was exercised by 68 persons altogether. In 1668, a voter was required to have property, to be “of sober and peaceable conversation,” and to take an oath of fidelity, but apparently, he was never required to take the oath of allegiance to the Crown. So rapidly did the colony expand that, by 1639, the holding of a primary assembly in Plymouth town became so inconvenient that delegates had to be chosen. Thus, there was introduced into the colony a form of representative government, though it is to be noted that governor, assistants, and deputies sat together in a common room and never divided into two houses, as did the assemblies in other colonies.

The settlement of Plymouth colony is conspicuous in New England’s history because of the faith and courage and suffering of those who engaged in it. The greatness of the Pilgrims lay in their illustrious example and in the influence they exercised upon the church life of the later New England colonies, for to the Pilgrims was due to the fact that the congregational way of organization and worship became the accepted form in Massachusetts and Connecticut. But, in other respects, Plymouth was vastly overshadowed by her vigorous neighbors. Her people, humble and simple, were without importance in the world of thought, literature, or education. Their intellectual and material poverty, lack of business enterprise, unfavorable situation, and defenseless position in the eyes of the law rendered them almost a negative factor in the later life of New England. No great movement can be traced to their initiation, no great leader to birth within their borders, and no great work of art, literature, or scholarship to those who belonged to this unpretending company. The Pilgrim Fathers stand rather as an emblem of virtue than a molding force in the life of the nation. 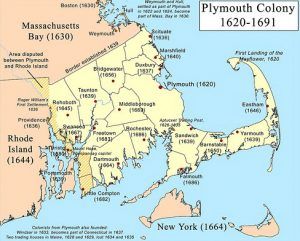 About This Article: This article was excerpted from The Fathers of New England: A Chronicle Of The Puritan Commonwealths, edited by Charles M. Andrews, a professor of history at Bryn Mawr College. This book was one in a fifty-volume series called the Chronicles of America, published by the Yale University Press in 1918. The volumes were written by various historians of the time on topics of American History. In 1923, Yale decided to create a series of films based on the books. Fifteen films were ultimately produced. Though the article, as it appears here, is contextually the same, it is not verbatim, as it has been edited.