William “Billy” Dixon (1850-1913) – Scout, plainsman, buffalo hunter, and Indian fighter, Dixon fought at the Second Battle of Adobe Walls, was one of the first residents of Hutchinson County, Texas, and served as the county’s first sheriff.

James M. Dodson (1842-1907) – Dodson was born in Missouri, and by some accounts had been a member of Quantrill’s Raiders during the Civil War. By the mid-1870s; however, he was in Arizona, working as the Prescott City Marshal. In 1876, he, along with Virgil Earp and Sheriff Ed. F. Bowers, were in a gun battle with two rowdy cowboys in Prescott when Earp killed one of the offenders. Three years later, in December 1879, Dodson, along with Sheriff Joseph R. Walker, Al Seiber, Thomas Simmons confronted two stage robbers when a shoot-out erupted. When the smoke cleared, one of the bandits was dead and the other was arrested.  In April 1882, Dodson killed another fugitive named Joe Banks in the line of duty. Though Prescott, Arizona had a few accounts of lawlessness, some say that the town never developed into lawless chaos like other popular mining camps of the time, primarily on account of Dodson. After retiring as the marshal of Prescott, Dodson moved to Yuma, Arizona, where he worked as a wall guard at the Arizona Penitentiary. His shooting skills proved invaluable on at least one occasion when a prisoner attempted to escape. He spent the last part of his life in Phoenix, Arizona, where he died on May 10, 1907, at the age of 67.

John Doherty – Doherty served as the Mora County, New Mexico Sheriff before he was later murdered. Read his story in Ciaran Conliffe’s article about his Great Grand Uncle – Death of a Sheriff – Murder and Conspiracy in the Old West 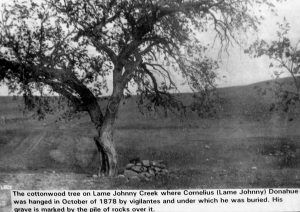 Cornelius “Lame Johnny” Donahue, aka: John A. Hurley (1850-1878) – A road agent operating in the Black Hills, he was arrested but before he could be taken to jail, he was hanged by a vigilante.

William Downing – Served as a Deputy sheriff in Willcox, Arizona under Burt” Alvord in the late 1890s. Later, when Alvord turned outlaw, Downing allowed him to escape.

E.L.M Drake (18??-1892) – U.S. Deputy Marshal in Oklahoma Territory. On May 25, 1892, Drake was looking for two horse thieves by the names of William Miller and William Hostetter. When he tracked them to the Deep Fork Creek near Sapulpa, Oklahoma and attempted to serve the warrant, the two pulled their guns and began firing. Drake’s horse was killed and he took a shot in the side and a thigh. However, he returned fire, killing both of the outlaws. Though some newspapers of the time reported that Drake had died of his wounds, other records indicated that he was re-commissioned as a U.S. Deputy Marshal in 1894.

Charles N. Dugger – (18??-1896) – A U.S. Deputy Marshal in Oklahoma Territory, Dugger was killed in the line of duty on June 20, 1896. A lawman for some 20 years, Dugger was shot on August 31, 1890 in southern Oklahoma Territory but survived to telegraph for assistance. Several years later; however, he would not be so fortunate. On June 20, 1896, while riding with posseman Joe Boyle, the pair tried to arrest three whiskey peddlers in the Osage Nation. However, the outlaws resisted, killing both officers.

Perry DuVal (18?-1873) – A U.S. Deputy Marshal in Indian Territory, DuVal, along with U.S. Deputy Marshals, Will Ayers and James Wilkerson, were escorting several prisoners from Indian Territory to Fort Smith, Arkansas on November 2, 1873. While the marshals and prisoners settled down for the night northwest of Muskogee, Oklahoma, one of the prisoners, a man named John Billy, somehow got out of his handcuffs, grabbed Marshal Duval’s weapon and shot him in the head. He then shot Marshals Ayers and Wilkerson, though both survived. John Billy was hanged for the murder at Fort Smith, Arkansas on April 3, 1874.