S.M. Burche – Appointed as a U.S. Deputy Marshal by C.H. Thompson of Guthrie, Oklahoma, Burche was one of the few women to be appointed as a deputy during the 19th century.

J. Steve Burke – U.S. Deputy Marshal commissioned at Guthrie, Oklahoma Territory by Marshal Evett Nix in 1893.  On September 1, 1893, Burke was one of the 13 deputy marshals that rode into Ingalls, Oklahoma and confronted the Bill Doolin Gang in what is known as the “Battle Of Ingalls.”

James Burkitt – U.S. Deputy Marshal commissioned in the Western District of Arkansas on July 13, 1892, under Marshal Jacob Yoes.  He was one of the sixteen deputy marshals that stormed Ned Christie’s home near Tahlequah, Cherokee Nation, in November 1892.

Charles Burns – U.S. Deputy Marshal commissioned in the Western District of Fort Smith, Arkansas. He served as a jailer in the Fort Smith federal jail, from 1871 to 1882. In this capacity, Burns foiled an escape attempt by Orpheus McGee, shooting the prisoner. McGee was crippled until he was later executed.

John Millard Burton – U.S. Deputy Marshal commissioned in the Southern Indian Territory Court at Ardmore, Oklahoma. Assigned to Mill Creek, a hell-raising cattle town in the Chickasaw Nation, he replaced U.S. Deputy Marshal John Poe, who was killed by whiskey dealers. Another deputy marshal had also been wounded by men running illegal alcohol in Mill Creek, who had declared war on the marshal’s force because they were not allowed to operate freely. When Marshal Benjamin H. Colbert of the Southern District wanted to stop the flow of liquor, he enlisted Deputy Marshal Burton who was successful in stopping illegal liquor operations.

Matthew “Matt” Burts (18??-??) – A lawman and outlaw, Burts rode with Burt Alvord, Billie Stiles, and the Owens brothers. He served briefly as a deputy town constable in Pearce, Arizona in 1899. He was imprisoned for robbery, and killed by a ranching neighbor in California in November 1925.

Shepherd “Shep” Busby (18??-1892) – A U.S. Deputy Marshal commissioned in the Western District of Arkansas, Busby was first assigned to the Cherokee Nation of Indian Territory. Busby was hanged after killing another deputy marshal. 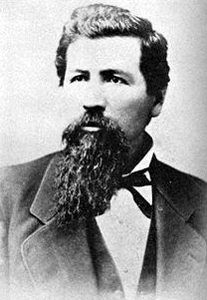 Edward “Ned” Wilkerson Bushyhead (1832-1907) – Bushyhead was a Cherokee miner, publisher, and lawman who traveled on the Cherokee Trail of Tears to Oklahoma and later became the Chief of Police in San Diego, California.