John R. Boston – A full blood Cherokee who served as a U.S. Indian policeman, he was killed in the line of duty.

Riley Boston – A lawman, Boston served in Company D of the Texas Rangers in 1887.

William Bouden – U.S. Deputy Marshal commissioned in the Western District at Fort Smith, Arkansas. In 1894, he captured two members of the infamous Cook Gang – Jim Price and Perry Brown. Later, he rode with Deputy Marshal Milo Creekmore on two occasions in an attempt to capture Ned Christie but were unsuccessful. 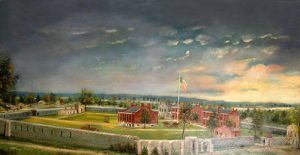 Fort Smith, Arkansas during its heydays

Joe Bowers – U.S. Deputy Marshal commissioned in the Western District at Ft. Smith, Arkansas under Marshal Thomas Boles. In May 1887, U.S. Deputy Marshal Dan Maples was killed and the murder blamed on Cherokee Indian, Ned Christie. For five years, Christie avoided capture, but on October 12, 1892, a posse of some 25 men stormed his cabin in the Going Snake District. In the melee, Joe Bowers was seriously injured in the leg, U.S. Deputy Marshal John Fields was killed, and the elusive outlaw was assassinated. Years later, it would be found that Christie had not killed Marshal Dan Maples in 1887. In December 1898 when Bowers got into an argument with ex-U.S. Deputy Marshal, Joe Pentecost in the Ritterbausch Saloon at Guthrie, Oklahoma, Pentecost shot and killed him.

H. E. Bowling – U.S. Deputy Marshal commissioned in the Southern District of Indian Territory at Paris, Texas under Marshal Sheb Williams. Living just north of Allen, Oklahoma, Bowling came to Indian Territory in 1894, where he was headquartered at Stonewall, Chickasaw Nation and later moved to Center, also in the Chickasaw Nation. Bowling was working with Deputy Marshal Bill McCall in the mid-1890s when the pair came across a mean hombre by the name of Bruner. Of Native American and African-American descent, Bruner denied his black heritage and was one of the toughest and meanest men in the territory. When Marshal McCall gave chase to the man into the woods, Bruner shot him in the back. Though McCall initially appeared to be only slightly wounded, he ended up dying of the gunshot.

Wes Bowman (or Baughman) (18??-1857) – U.S. Deputy Marshal in Indian Territory, Bowman was one of the sixteen deputy marshals that rode to Ned’s Mountain Fort, Cherokee Nation where Ned Christie was killed on November 3, 1892. When Christies’ fort was blown up he tried to escape and fired his Winchester rifle hastily at Bowman as he ran past. The rifle was so close to Bowman’s face that he received powder burns. Bowman fired at the escaping Christie striking him behind the ear, killing him on the spot.

Elihu R. Box – U.S. Deputy Marshal commissioned on July 9, 1889, in the Western District at Fort Smith, Arkansas serving under Marshal Jacob Yoes. On June 26, 1890, he was killed by R. E. Boutwed and John C. Ball in the Chickasaw Nation trying to serve a warrant of arrest. Both men were convicted and sentenced to be executed on December 19, 1890, at Paris, Texas.

Reuben Hornsby Boyce (1853-1927) – Lawman, Texas Ranger and miner, Boyce traveled the west before finally settling down in Texas. Boyce was born in Williamson County, Texas on January 8, 1853, the oldest of ten children. Growing up when Texas was still in its infancy, Boyce was a rugged individual who joined the Texas Rangers sometime before 1878. As a Ranger, Boyce quickly developed a reputation for always “getting his man”; and was an active Indian Fighter, participating in the Battle of Horse Head Crossing on the Pecos River in 1878, in which the entire Indian band was annihilated. Boyce would later say that he had been a lawman in New Mexico, Arizona and at El Paso, Texas before he headed northwest about 1890. In 1898, he headed to Alaska during the Klondyke gold rush, where he tried to find his fortune for three years. Later, he was said to have lived in British Columbia for a time before finally returning to Texas. He died in Coahoma, Texas on May 23, 1927.

W. C. Boyer – U.S. Deputy Marshal commissioned in the Southern District court in Paris, Texas in 1897. He served under Marshal John S. Hammer for four years and was assigned to the Ardmore area. After serving as a field marshal, Boyer became a jailer at Purcell served for four years.

Joe Boyle – U.S. Deputy Marshal commissioned in the Western District at Fort Smith, Arkansas under Marshal George C. Crump. He was killed while on duty in 1896.

J.W. Bracken – Served as a Texas Ranger, Company B in 1889 under Captain Sam McMurry. 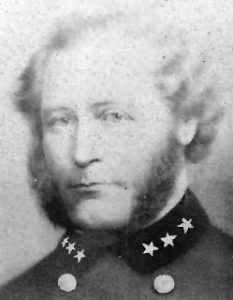 Cyrus P. Bradley (1919-1865) – Sheriff and first Chief of Police in Chicago, Illinois, Bradley was born in Concord, New Hampshire. In 1837, he moved to Chicago. In 1849 he was appointed as a tax collector in South Chicago and worked with the local fire company. He then served to terms as the Cook County Sheriff before becoming Chicago’s first police chief on May 26, 1855. Actively playing a role in capturing criminals, Bradley and the Chicago Police Department was credited with solving every crime reported during its first three months in operation. When a new major abolished the position of the police chief, Bradley was let go and in 1860, began the first of two terms as the fire marshal. However, in 1861, the police chief position was restored and Bradley began to serve once again. He was also appointed as a provost marshal of the army following the outbreak of the Civil War. During his tenure, Bradley made a number of improvements to Chicago’s police force, including increasing the size of the force, dividing the city into distinct precincts, and creating the department’s first detective division. He died in Chicago, Illinois on March 6, 1865.

Abner Brasfield – An outlaw and lawman, Brasfield, at the age of 22, killed Arkansas Justice of the Peace Bill Hamm when the two were arguing over land. The fleeing murderer was later captured and served four years in an Arkansas prison. After his release, he served as a peace officer in Eufaula, Oklahoma.

William J. Brady (1825-1878) – Served as the sheriff in Lincoln County, New Mexico during the Lincoln County War. He was killed by Billy the Kid and the Regulators.