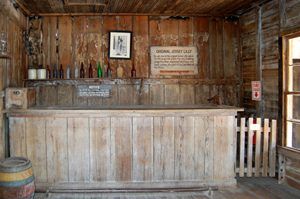 By December 1882, railroad construction had ended on the bridge and Vinegarroon was abandoned. Bean then headed northwest to the railroad camp of Eagle Nest (later called Langtry.) There, he quickly set up another tent saloon on railroad land, to the chagrin of Cezario Torres, who owned most of the land beside the railroad right-of-way. He later built a wooden structure for his saloon, which he called the “Jersey Lillie” after the well-known British stage actress Lillie Langtry. Her real last name was actually Emilie Le Breton and she was not related to George Langtry, of whom the town was named. Bean used the saloon as his headquarters and courtroom and continued his eccentric judicial antics.

On one occasion when the body of a dead cowboy was found in the area, which held $40 and a six-gun, he charged the corpse with carrying a concealed weapon and fined it $40. In another case, when an Irishman named Paddy O’Rourke was going to be tried for shooting a Chinese laborer, a mob of 200 angry Irishmen surrounded the courtroom and threatened to lynch Bean if O’Rourke was not freed. In response, Bean ruled that “homicide was the killing of a human being; however, he could find no law against killing a Chinaman” and the case was dismissed. 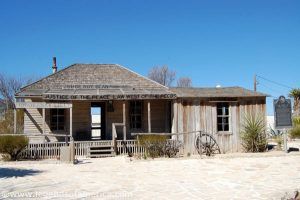 Despite the protest of Texas Rangers, Bean thought it preposterous to forbid a man to carry a weapon. One man who was arrested and accused of carrying a concealed weapon was released by Bean with the following logic.

“That charge won’t stick,” pronounced the judge. “If he was standing still when he was arrested he wasn’t carrying weapons because he wasn’t going no place. And, if he was not standing still, he was traveling, and it’s legal for travelers to carry weapons. Case dismissed.”

Jurors for his cases were chosen from his best bar customers and Bean allowed no hung juries or appeals. Because Langtry had no jail, all cases were settled by fines, most of which just happened to be the amount the accused had on his person. Of these fines collected, he was never known to have sent any of the money to the state, but, rather pocketed the cash.

Though later portrayed in Western films and books as a “hanging judge”, Bean only sentenced two men to hang, one of which escaped. And, in fact, when it came to horse thieves, who were often sentenced to hang, they would be let go under Judge Bean if they returned the horses, and of course, paid a fine. Bean also made money from granting divorces, which he didn’t have the jurisdiction to do, and married numerous couples, always ending the wedding ceremonies with the words, “and may God have mercy on your souls.” 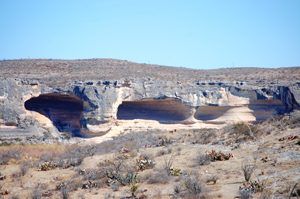 Bean was defeated in the election of 1886, but the very next year a new precinct was created after Langtry had become part of Val Verde County and he was appointed once again as the new justice of the peace. He continued to be elected until 1896 when he was finally defeated. However, in typical “Bean” fashion, he refused to surrender his seal and law book and continued to try all cases north of the railroad tracks.

In 1896, Judge Roy Bean made national headlines by setting up a boxing match in Langtry. Because Texas had outlawed boxing, he scheduled the heavyweight fight between Robert James Fitzsimmons and Peter Maher, to be held on a sandbar on Mexico’s side of the Rio Grande, just south of Langtry. Bean then made arrangements for the press, spectators, and Texas Rangers to travel by train from El Paso to Langtry. Fitzsimmons knocked Maher out in 95 seconds, winning the heavyweight title. 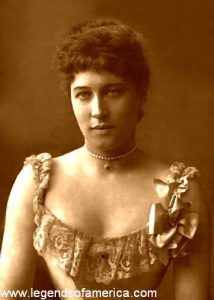 For years, he boasted of his “acquaintance with Miss Langtry,” telling anyone and everyone that he would one day meet her. When he built a home for himself behind the saloon, he even called it the “Opera House” in anticipation of a visit by the famous actress. Though he never met Lillie Langtry, he often wrote her, and she allegedly wrote him back and sent him two pistols, which he cherished for the rest of his life. He also claimed credit for naming the town after her, even though it was not the case as mentioned before it was named for railroad man George Langtry.

As he aged, Bean spent much of his time on his porch with a shotgun in his arms and doing a lot of drinking and boasting. However, he was also known to help the poor in the area.

After a heavy bout of drinking, Bean died in his saloon on March 16, 1903, of lung and heart ailments without ever having met his fantasy woman Lillie Langtry. He was initially buried in Westlawn Cemetery in Del Rio, Texas, but due to the numerous visitors to his grave, he and his son, Samuel, were later re-interred behind the Whitehead Memorial Museum.

The Jersey Lilly Saloon still stands in Langtry, Texas today, along with his home and a museum. 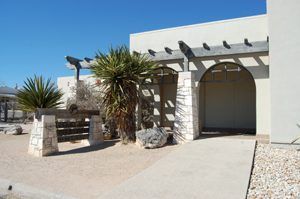 Langtry – Home to the Only Law West of the Pecos