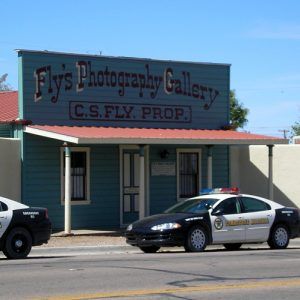 Camillus “Buck” Sidney Fly, more commonly known simply as “C.S. Fly,” Camillus is most noted for the many photographs he took during Tombstone, Arizona’s wild and wooly days. However, what many do not know is that he was was also a lawman.

The Fly’s lived in Andrew County, Missouri at the time of Camillus’ birth in 1849. His parents, Captain Boon and Mary Percival Fly planned to move to California, but Mary was pregnant with her seventh child. Not wanting to deliver her baby on the trail,  they waited for him to be born. On May 2, 1849, Camillus Sidney Fly was born and a few weeks later, on May 24th, the family began their trek to California where Fly grew up in Napa County.

He married Mary “Mollie” E. Goodrich on September 29, 1879, in San Francisco. Mary, who was also a photographer, and Camillus soon moved to Arizona Territory, where they settled in Tombstone in December 1879.  Camillus, who preferred to be called “Buck,” and his wife immediately set up a photographic studio in a tent before going to work on more permanent quarters.

In July 1880, they opened up a 12-room boarding house and a studio called the “Fly Gallery” in the back of the building located at 312 Fremont Street in Tombstone.

On October 26, 1881, Fly was in a unique position, as the infamous Gunfight at the O.K. Corral actually took place just off Fremont Street between his studio and Jersey’s Livery Stable. During the shootout, Cochise County Sheriff John Behan cowered inside the studio, watching the gunplay, only to be joined by Ike Clanton who fled in terror proclaiming he was unarmed.  When the smoke cleared, it was Fly, armed with a Henry rifle, who disarmed a dying Billy Clanton. For some strange reason, Fly did not photograph the aftermath of the shootout, but legend has it that he was threatened by one of the Earp’s if he did. 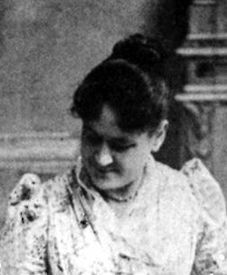 Somewhere along the line, Camillus and Mary adopted a little girl they called Kitty, and Mary continued to run the boarding house and studio as Camillus traveled around the area taking photographs. While her husband was out, she acted as one of the few female photographers of the time, taking pictures of anyone who could pay the studio price of 35 cents.

In March 1886, Camillus accompanied General George Crook to the Canyon de Los Embudos for the negotiations with Geronimo. He became most famous for the photographs of the negotiations, Geronimo and the other wild Apaches he took on March 25 and 26th.

However, at the same time, Fly had become a heavy drinker and the year after these famous photographs were taken, his wife Mary, took their child and separated from her husband.  He then left Tombstone on December 17, 1887, to tour Arizona with his photographs and briefly established a studio in Phoenix in 1893. However, the following year, he returned to the area. In the meantime, Mary continued to run the studio in Tombstone during his absence.

Though his drinking was becoming more and more heavy, he was elected as the Cochise County Sheriff in 1895 and served for two years. Afterward, he ranched in the Chiricahua Mountains, until his death at Bisbee on October 12, 1901. Though Camillus and his wife had been separated for years, she was at his bedside when he died and made arrangements to have his body returned to Tombstone, where it was buried at the Tombstone Town Cemetery, complete with a stone marker.

Mary continued to run the Tombstone gallery on her own, and in 1905 she published a collection of her husband’s Indian campaign photographs entitled Scenes in Geronimo’s Camp: The Apache Outlaw and Murderer. In 1912, Mary finally retired, moved to Los Angeles, California, and donated her husband’s negatives to the Smithsonian Institution in Washington, D.C. She died in 1925.

During his lifetime, the Fly Studio created one of the best pictorial records of the early Tombstone area that exists.