After Prohibition ended in 1933, the organized crime groups lost the high profits that they had acquired throughout the 1920s and soon expanded into other ventures, such as labor racketeering through control of labor unions, construction, loan sharking, extortion, protection rackets, sanitation, transportation, prostitution, and drug trafficking.

By the 1950s, several Mafia bosses had made legitimate investments in legalized casinos in Las Vegas, Nevada, where they skimmed cash before it was recorded. The amount is estimated to have been in the hundreds of millions of dollars.

Operating in the shadows, the Mafia faced little opposition from law enforcement for years, as local law enforcement agencies did not have the resources or knowledge to effectively combat organized crime committed by a secret society they were unaware existed.

It wasn’t until 1951 that a U.S. Senate committee determined that a “sinister criminal organization,” later known as La Cosa Nostra, operated in this nation. Six years later, The New York State Police uncovered a meeting of major La Cosa Nostra figures from around the country in the small upstate New York town of Apalachin. Many of the attendees were arrested. The event was the catalyst that changed the way law enforcement battles organized crime. 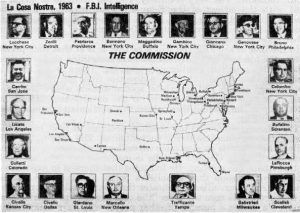 Mafia bosses across the country in 1963

In 1963, Joe Valachi became the first Mafia member to turn state’s evidence, and provided detailed information of its inner workings and secrets of the organization. Afterward, the Federal Bureau of Investigation began an aggressive assault on the Mafia’s National Crime Syndicate. Though this created more pressure on the Mafia, it did little to curb their criminal activities.

However, the Mafia’s influence in the Las Vegas economy began to dwindle when the Nevada State Legislature passed a law that made it easier for corporations to own casinos in 1969. The U.S. Congress passed the RICO Act a year later, which gave more authority to law enforcement to pursue the mafia for its illegal activities. Success was made by the beginning of the 1980s when the FBI was able to rid Las Vegas casinos of Mafia control and made a determined effort to loosen the Mafia’s stronghold on labor unions. 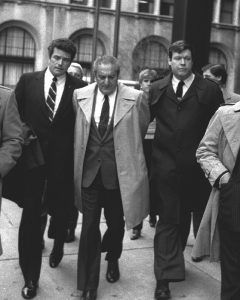 Gambino Family Boss Paul Castellano arrested in 1985. After he was released on bail, he was killed by other mob members.

By the 21st century, the Mafia has continued to be involved in a broad spectrum of illegal activities including extortion, corruption of public officials, gambling, infiltration of legitimate businesses, labor racketeering, loan sharking, and more. Today most of its activities are confined to the Northeast and Chicago.

The structure of La Cosa Nostra has not changed since the 1930s, and La Cosa Nostra, in various forms, has existed for over 100 years.