It was now determined to stay by our mud fort until the next day when the government train with its infantry escort would arrive, and make it safe to continue with our escort.

Our hole in the hillside was a place of comfort. The roof, composed of boughs of trees and earth, was supported by posts of sufficient strength to make us sure that the Indians might ride over the top of our fortification without a danger of their coming through. Night coming on, we organized a guard – seven on a tour, the tour being of four hours’ length.

The first relief consisted of our party, with a soldier addition. We did not discover the usual plan of walking a beat to be the safest at this place, for Indians will crawl up, and are not particularly careful in the use of their arrows; so we took each one his post in such a position as would command the best view of a certain space in his immediate vicinity.

An hour after dark, a whirring noise was heard over our heads; all kept quiet; soon another, and we knew that some prowling scoundrel was driving arrows over our position, to discover the whereabouts of our guard. The game did not succeed in discovering our location to Mr. Indian, so they left us to the quiet possession of our “dobe.” Just before daylight, the whole garrison was roused, and we made ready for an attack, which did not come. Indians have two favorite moments for attack. Just as day breaks the white man sleeps the soundest, and this the Indian knows. At midday, the white man feels a confidence in the broad day and is less likely to be on this guard. The Indian takes advantage of this for his sudden attack.

So far as our experience goes no fear is to be apprehended from Indians unless they can surprise their foe, and this, too, when they outnumber him ten to one. The red-skins are more like wolves than anything else that I can liken them to; cowardly in the extreme when they find that their enemy, no matter how inferior in number, is ready for an attack and willing to fight. They are more wantonly cruel than it would seem possible for a human being to be.

Our sentinel has just given us the information that “a considerable body of something has just come into sight.” Whether they are Indians or our expected train we cannot tell.

The result of the information is that we are to be on the anxious seat until the party is near enough to discover whether we have a fight on hand or a friend to welcome. The party has arrived, proving to be Captain Musgrove of the First United States Volunteers, with an escort, and Mr. Baker, the Division Agent of the Butterfield Overland Dispatch Company. Mr. Baker was within sight of Captain Musgrove’s camp yesterday afternoon, driving toward it in a light wagon with a man named Brigham, when they were attacked by twenty or thirty Indians. Mr. Brigham took the lines and Baker, with his Ballard rifle, kept the Indians off, and reached the camp in safety.

Soon after this the red-skins came in greater force and endeavored to drive off the stock from the camp, but a few shots from the infantry drove them away. The Indians were seen hovering about the camp beyond rifle range during the entire afternoon. While we were listening to the different Indian stories of the party just arrived, another body of mounted men were seen coming from the direction of Denver.

This caused another sensation, but soon after their blue coats were visible, and showed them to be friends. Indians do not ride like white men and are readily known in the distance by the frontiersman whose eye becomes wonderfully strong by the constant watch that he keeps.

Soon Captain McMichael, who is stationed at Pond Creek with his command, Company A, thirteenth Missouri, came riding into our camp with an escort of twenty men, and the five men that had been buffalo hunting. The buffalo hunters said that they were within sight of our camp when a number of Indians came charging toward them from the bluff near, and seeing other Indians coming from the direction of the station, they concluded that the Indians had possession of it, so start3ed at once for the next camp, “Eaton Station,” at which place they arrived just as the Indians were driving off the stock.

The Indians that had pursued them they had kept at a distance by an occasional shot. When the boys left camp they had taken no ammunition except that in their revolvers and rifles, so it was necessary to be as economical as possible.

A short consultation was now held and a decision arrived at that Captain McMichael should return to Pond Creek with his men, acting as escort to our coach.

We left Smoky Hills Station the afternoon the 25, reaching Eaton Springs that evening without adventure. The place found deserted, so occupied the little huts built by the men who had been stationed there as a garrison. The night passed without adventures; we continued our journey at the early dawn, reaching Henshaw Springs, a very beautifully situated station, in time to devour our customary meal of Buffalo met, cooked on a fire made of “chips.” The mules needed rest, so a long halt was made. We reached this place just at evening, where we met two coaches from Denver that had been stopped until it should be considered safer to travel. Some Indians have been seen along the route above but in any great force. An escort will go with us for some distance when it is anticipated that it will be safe to dispense with the late necessity. 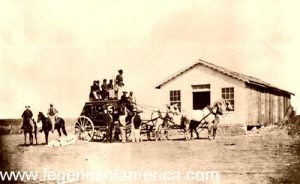 The late raid of the Indians will prove to the government how useless it is to make treaties, and supply arms and material to parties that take every opportunity to murder and rob citizens.  Some of the most horrible barbarities have lately been committed, that I shall describe in a future letter. General Brewster is making every effort to restock the line, and preparations are being made for a military protection of the route, which when perfected, will render the route safer than any other. The Indians on this foray have been led by white men on every occasion, but they are careful to keep out of the range of our rifles. In the attack on our coach, General Brewster shot twice at a white man, who ran off with much greater haste than the Indians that he led, cowardly as they were.

The weather, fortunately, has been excellent, which has been a source of much congratulation to us.

Compiled and edited by Legends of America, updated February 2018.