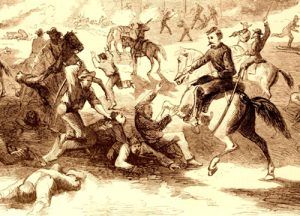 Another evidence of their cowardice was shown in the fact, that very few stone houses were molested. They shunned almost all houses that were closed tightly so that they could not see in when the inmates did not show themselves. There is a deep ravine, wooded but narrow, which runs almost through the center of town. In this many citizens escaped. They often chased men into this ravine, shooting at them all the way. But they never followed one into the ravine itself, and seldom followed up to the brink. Whenever they came near to it, they would shy off as if expecting a stray shot. The cornfield west of the town was full of refugees. The rebels rode up to the edge often, as if longing to go in and butcher those who had escaped them, but a wholesome fear that it might be a double game restrained them. Mrs. Hindman lived on the edge of this cornfield. They came repeatedly to her house for water. The gang insisted on knowing what “was in the cornfield?” She brave woman, replied, “Go in and see. You will find it the hottest place you have been in today.” Having been to carry drink to the refugees, she could testify to the heat. The rebels took her word and left. So every little ravine and thicket around the outskirts of the town were shunned as if a viper had been in it. Thus scores of lives were saved that would otherwise have been destroyed.

In almost every case where a determined resistance was offered, the rebels withdrew. Mr. A. K. Allen lives in a large brick house. A gang came to his door and ordered him out. “No!” replied the old gentleman, “if you want anything of me, come where I am. I am good for five of you.” They took his word for it, and he and his house were thenceforth unmolested. The two Messrs. Rankin were out in the street trying to gain a certain house when they were overtaken by six of the ruffians. They at once faced their foes, drew their revolvers, and began to fire when the whole six broke and fled. The cowards evidently did not come to fight, but to murder and steal. 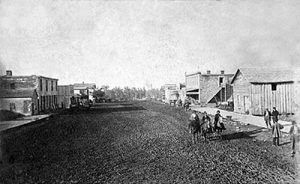 We can only give a few incidents of the massacre as specimens of the whole. The scenes of horror we describe must be multiplied until the amount reaches one hundred and eighty, the number of killed and wounded.

General Collamore, Mayor of the city, was awakened by their shouts around the house. His house was evidently well known, and they struck for it to prevent his taking measures for defense. When he looked out, the house was surrounded. Escape was impossible. There was but one hiding place — the well. He at once went into the well.

The enemy went into the house and searched for the owner, swearing and threatening all the while. Failing to find him, they fired the house and waited round to see it burn. Mrs. Collamore went out and spoke to her husband while the fire was burning.

But the house was so near the well that when the flames burst out they shot over the well, and the fire fell in. When the flames subsided, so that the well could be approached, nothing could be seen of Mr. Collamore or the man who had descended into the well with him. After the rebels had gone, Mr. Lowe, an intimate friend of Gen Collamore, went at once down the well to seek for him. The rope supporting him broke, and he also died in the well, and three bodies were drawn from its cold water. At Dr. Griswold’s there were four families. The doctor and his lady had just returned the evening before from a visit east. Honorable S. M. Thorp, State Senator, Mr. J. C. Trask, Editor of State Journal, Mr. H. W. Baker, grocer, with their wives, were boarding in Dr. Griswold’s family. The house was attacked at about the same time as General Collamore’s. they called for the men to come out. When they did not obey very readily, they assured them “they should not be harmed if the citizens quietly surrender it might save the town.” This idea brought them out at once. Mr. Trask said, “if it will help save the town, let us go.” They went downstairs and out of the doors. The ruffians ordered them to get in line and to march before them towards town. They had scarcely gone twenty feet from the yard before the whole four were shot down. Dr. Griswold and Mr. Trask were killed at once. Mr. Thorp and Mr. Baker wounded, but apparently dead. The ladies attempted to reach their husbands from the house but were driven back. A guard was stationed just below, and every time any of the ladies attempted to go from the house to their dying friends, this guard would dash up at full speed, and with oaths and threats, drive them back. After the bodies had lain about half an hour, a gang rode up, rolled them over, and shot them again. Mr. Baker received his only dangerous wound at this shot. After shooting the men, the ruffians went in and robbed the house. They demanded even the personal jewelry of the ladies. Mrs. Trask begged for the privilege of retaining her wedding ring. “You have killed my husband let me keep his ring.” “No matter,” replied the heartless fiend, and snatched the relic from her hand. Dr. Griswold was one of the principal druggists of the place, Mr. Thorp was State Senator, Mr. Trask Editor of the State Journal, and Mr. Baker one of the leading grocers of the place. Mr. Thorp lingered in great pain till the next day, when he died. Mr. Baker, after long suspense, recovered. He was shot through the lungs.

The most brutal murder was that of Judge Carpenter. Several gangs called at his house and robbed him of all he had but his genial manner was too much for them, and they all left him alive and his house standing. Towards the last, another gang came, more brutal than the rest. They asked him where he was from. He replied “New York.” “It is you New York fellows that are doing all the mischief,” one replied and drew his revolver to shot him. Mr. Carpenter ran into the house, upstairs, then down again, the ruffian after him and firing at every turn. He finally eluded them and slipped into the cellar. He was badly wounded so that the blood lay in pools in the cellar where he stood for a few minutes. His hiding place was soon discovered, and he was driven out of the cellar into the yard and shot again. He fell mortally wounded.

His wife threw herself onto him and covered him with her person to shield him from further violence. The ruffian deliberately walked around her to find a place to shoot under her, and finally raised her arm and put his revolver under it, and fired so she could see the ball enter his head. They then fired the house, but through the energy of the wife’s sister, the fire was extinguished. The Judge had been married for less than a year. He was a young man but had already won considerable distinction in his profession. He had held the office of Probate Judge for Douglas county, and a year before was a candidate for Attorney General of the State.

Mr. Fitch was called downstairs and instantly shot. Although the second ball was probably fatal, they continued to fire until they lodged six or eight balls in his lifeless body. They then began to fire the house. Mrs. Fitch endeavored to drag the remains of her husband from the house but was forbidden. She then endeavored to save his miniature but was forbidden to do this. Stupefied by the scene, and the brutality exhibited toward her, she stood there gazing at the strange work going on around her, utterly unconscious of her position or her danger. Finally one of the ruffians compelled her to leave the house, or she would probably have been consumed with the rest. Driven out, she went and sat down with her three little ones in front, and watched the house consumed over the remains of her husband. Mr. Fitch was a young man of excellent character and spirit. He was one of the “first settlers” of Lawrence and taught the first school in the place.

James Perine and James Eldridge were clerks in the “County Store.” They were sleeping in the store when the attack was made and could not escape. The rebels came into the store and ordered them to open the safe, promising to spare their lives. The moment the safe door flew open, they shot both of them dead and left them on the floor. They were both very promising young men, about seventeen years of age.

Mr. Burt was standing by a fence when one of the rebels rode up to him and demanded his money. He handed up his pocketbook, and as the rebel took the pocket-book with one hand, he shot Mr. Burt with the other. Mr. Murphy, a short distance up the same street, was asked for a drink of water, and as the fiend took the cup with his left hand he shot his benefactor with his right. Mr. Murphy was over sixty years of age. Mr. Ellis, a German blacksmith, ran into the corn in the park, taking his little child with him. For some time he remained concealed, but the child growing weary began to cry. The rebels outside, hearing the cries, ran in and killed the father, leaving the child in its dead father’s arms. Mr. Albach, a German, was sick in his bed. They ordered the house cleared that they might burn it. The family carried out the sick man on the mattress and laid him in the yard, when the rebels came out and killed him on his bed, unable to rise. These are species of cruelty to which savages have never yet attained.

One of the guerrillas went to the stable of J. G. Sands, corner of Pinckney and Tennessee Streets, stole his carriage horse and the pet pony “Freddie,” while engaged in this, four others came up the alley, one of them was heard to say, “why in h____ are not these houses burnt.” Dismounting to execute their threat, they were met by “Freddie” running past them, who had escaped from his captor, they were urged to assist in securing the runaway, at once remounting they all followed him, who lead them away from this part of town and before he was again secured they were engaged in other scenes of murder. This providential escape of the pony undoubtedly saved, not only the houses, but also the lives of Dr. Fuller, B. W. Woodward and J. G. Sands.