Harlan/Thompson (Smith County) Post Office 1873-1995 – A small population remains as well as the ruins of Main Street and a high school gymnasium. Harlan was home to Gould College which lasted from 1881 until 1891. The settlement was first named Thompson but was changed to Harlan in 1877.

Havana (Osage County) Post Office 1858-Early 1870s – Ruins of the Havana Stage Station and hotel remain and a sign has been posted on the site. Not to be confused with Havana in Montgomery County. 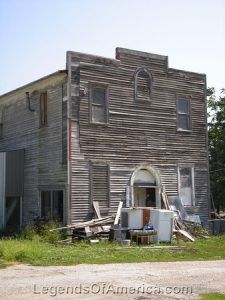 Hunter (Mitchell County) Post Office 1895-present – Semi-ghost town with a population of 57. It still retains its post office and just a few businesses.

Kanona (Decatur County) Post Office 1887-1955 – Some ruins and abandoned buildings remain. The site of Kanona is currently on private property. 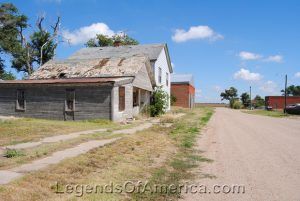 LeHunt (Montgomery County) Post Office 1905-Early 1930s – Some ruins remain east of the Elk City Lake. The town was fairly bustling thanks to a central cement factory in the center of town being the biggest employer. During the Great Depression, cement sales dropped significantly and went out of business, so the town died.

Lexington (Clark County) Post Office 1885-1900 – Nothing remains of the townsite except a community building.

Lone Star (Douglas County) Post Office 1899-1953 – A small population remains just south of  Clinton Lake near Lone Star Lake.  A community existed in the area before Lone Star was organized. A post office was formed in 1875 under Bond, then Gideon. The name Lone Star was chosen in the 1890s.

Lyona (Dickinson County) Post Office 1869-1888 – Nothing remains of the townsite except for a church & the old Lyona School built in 1870.

Millbrook (Graham County) Post Office 1878-1889 – The ruins of a schoolhouse remain in the area.

Minersville (Cloud County) Post Office 1877-1899 – Some houses and foundations remain along with a cemetery. 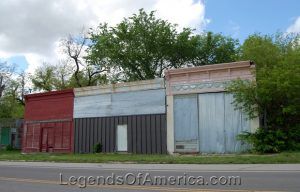 Muscotah (Atchison County) Post Office 1861-present – Like other small Kansas towns, Muscotah declined over the next century. Though it still maintains a post office and about 200 people, the village is filled with abandoned buildings. It is located about 26 miles west of Atchison on U.S. Highway 159.

Neuchatel (Nemaha County) Post Office 1864-1901 – The cemetery, church, town hall, and schoolhouse have all been restored and well-kept.