The Short Creek Republican newspaper was established on September 16, 1880. The name would later be changed to the Galena Republican. It survived until 1900. Another newspaper called the Galena Times was founded in 1890, but suspended in 1899. 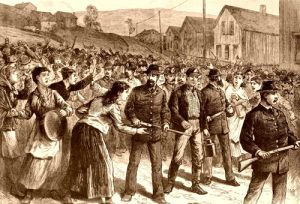 By the late 1890s Galena had 265 producing mines, two banks, 36 grocers, and more than four dozen other retails stores.

Galena continued to thrive and by 1904 there were over thirty mining companies situated in or near the town.

Finally, the dispute between Galena and Empire City entered the courts and after a long period of litigation, a truce was declared between the two cities, which, at last, began to work together in building one of the best mining camps in the world.

When Empire City became a suburb of Galena on July 9, 1907, the surrender of her rights as an incorporated city to Galena was made amid great rejoicing, and pieces of the old stockade were taken away as souvenirs by citizens of both settlements. Empire City was annexed into Galena as its Fifth Ward in 1910.

By that time, Galena boasted three banks, three newspapers, and an opera house. Though its primary lead and zinc mining and smelting remained its principal industries, there were also foundries, stamping works, grain elevators, a novelty works, and a broom factory. The population in 1910 was 6,096.

In 1926, when Route 66 came through Kansas, Galena, like other small towns along the Mother Road, responded with services to the many travelers, bringing with it a additional prosperity to the thriving  town.

However, just a few years later, terrible labor strikes between the miners and the mining companies would result in hundreds of unemployed miners and bloodshed along Route 66. In 1935, the members of the Mine, Mills and Smelter Workers’ International Union went on strike in the Tri-State Mining District. The mining companies were unimpressed and quickly replaced the strikers by non-union workers who were organized into a company union, commonly called the Blue Card Union.

As a result, a mob of angry unemployed miners blocked Route 66 and sprayed bullets and rocks onto any passing vehicles who failed to follow their commands. They were particularly interested in any vehicles that were transporting the scabs belonging to the Blue Card Union. Police officers were forced to detour the Route 66 traffic and then Governor Alf Landon, declared martial law in Galena, and dispatched National Guard troops to quell the violence.

The unrest; however, would continue for the next few years, before exploding into violence again in April 1937 when the Committee for Industrial Organization (CIO) undertook to aid the unemployed workers belonging to the Mine, Mill and Smelter Workers’ Union. While the unemployed miners were distributing leaflets for the CIO at a smelter in Joplin, Missouri, they were seized by Blue Card unionists and severely beaten on April 10, 1937. The next day, about 5,000 members of the Blue Card Union met at Picher, Oklahoma armed with clubs and pick handles to disperse a meeting of CIO organizers and wrecked the local Union Hall. They then traveled to Treece, Kansas where they demolished another Union Hall before continuing on to Galena.

Unemployed union members in Galena; however, had been forewarned and barricaded their meeting hall. When the Blue Card mob arrived, brandishing clubs, gunfire broke out and nine men were shot, one fatally. In the end, the hall was wrecked and the union records were stolen. Twenty-five members of the Blue Card Union and ten members of the CIO were later arrested.

Though mining continued in the area until the 1970s, it was never the same. The mines were eventually exhausted and the population dwindled to less than a tenth of its former glory.

By the time the last lead and zinc mines closed in Cherokee County,  nearly 2.9 million tons of zinc and 700,000 tons of lead had been produced. 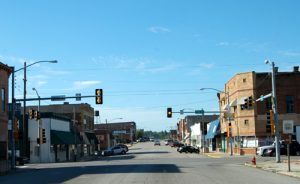 Up until just a few years ago, the Galena area, and all of the Tri-State Mining District, which encompasses approximately 2,500 square miles in southeastern Kansas, southwestern Missouri, and northeastern Oklahoma, was dotted with chat piles and mine tailings. These however led to environmental problems when the lead, zinc, and other minerals began to leech into the shallow groundwater. Contaminating wells and nearby streams and rivers, the Environmental Protection Agency began to clean up the area in 1983. Completed today, most of the old sites have been returned to their natural state. Few mining remnants can be seen other than buildings, foundations, and scattered mining equipment.

After the clean-up, the area was still dangerous, as old mining shafts and tunnels still run beneath and, in 2006, a mine collapse caused  two historic buildings in Galena to cave way. Stabilization of buildings is an on-going effort today.

Galena is called home to about 3,000 people today and provides peeks at a number of historic buildings, including vintage examples of the Mother Road, as well as architecture from the booming cattle and mining days of this historic city. 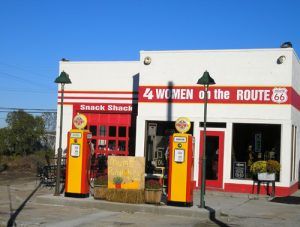 A must stop along Route 66 is Cars on the Route (originally called 4 Women on the Route), housed in an old KanOtex Service Station. Right beside the station is “Tow Tater,” a 1951 International boom truck that was the inspiration for “Tow Mater” in the movie Cars, plus vehicles that resemble Doc the Hornet Hudson, Red (the fire truck), and a Buick as the Sheriff of Radiator Springs.

Make sure to stop at the Historical and Mining Museum to learn all about Galena’s rich history.

Galena is four miles north of the Oklahoma border and immediately west of the Missouri state line.

If you’re traveling Route 66, keep your eyes wide open because the next small town on the Kansas Mother Road is just some three miles down the road. Enjoy the ride as you head to Riverton, Kansas.