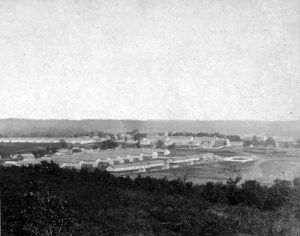 There are several old officers houses on historic Fort Leavenworth that are haunted, faces can be seen in the back of the fireplaces and strange noises heard at night. Many believe the ghosts are spirits of inmates who were executed at the United States Disciplinary Barracks on Fort Leavenworth and the ghosts of those buried in the National Cemetery located just beyond the prison walls.

The Chief of Staff’s Quarters at 624 Scott Avenue to continue to host a tea party in the parlor. Though apparitions have not been seen, several people report hearing the sounds of a tea party coming from an otherwise empty parlor.

Former Site of the St. Ignatius Chapel – The original St. Ignatius Chapel was built where a house now stands at 632 Thomas Avenue. In 1875, the original church and rectory burned down claiming the life of a young priest who had been assigned there. After the fire, the salvageable building material was used to build the new residence.

Some of the scorched bricks can still be seen making up the fireplace in the dining room of the house. Etched into these bricks are several names, including that of Father Fred. Many who have lived there have claimed to see Father Fred walking through the house in his priestly robes. Reportedly, he is most often seen walking up and down the stairs and in the kitchen and dining room. In the 1970’s his robed figure even appeared in a Polaroid photograph taken at a dinner party.

After the first chapel burned down in 1875 a new one was built at the corner of McClellan and Pope. However, on December 16, 2000, in the early morning hours it burst into flames and was completely destroyed. It makes one wonder if there isn’t some more malevolent force at work here.

The General’s Residence – located at 1 Scott Avenue, is said to continue to host General George Armstrong Custer. Often seen roaming the first floor of the old residence his spirit supposedly lingers because Fort Leavenworth was the site where he was court-martialed in 1867 for leaving his command and mistreating his troops.

The hearing was held in the commanding general’s quarters, where Custer was found guilty and given a year’s suspension without pay. Afterwards, he was reinstated and rejoined the Seventh Cavalry in September, 1868 where he served until the disastrous Battle of Little Bighorn in 1876.

Old Disciplinary Barracks— This old Disciplinary Barracks has 12 towers along the wall and before the barracks closed not all of them were manned. Number eight tower had not been renovated and was never manned during the later years that the prison was open. Closed off, the only way you could get into the tower was to walk along the wall from another tower. However, guards would often report seeing something move inside the tower. Long ago, a soldier committed suicide in the tower by shooting himself in the head.

When the prison was still open, the control tower would often get phone calls from Eight Tower, even though there was no phone in the tower. When the line was picked up there would be only static on the other end. At one point a patrol car reported seeing someone standing in the tower pointing a rifle at them. No one was in the tower.

Other towers were also haunted. Guards would report hearing the sounds of someone walking up the stairs and knocking on the trap door entrance to the towers when no one was there.

Building 65 was once the prison hospital and an unused elevator was said to be haunted. According to legend fourteen German POW’s were executed in the elevator shaft by hanging. Often guards would report hearing screaming coming from the old elevator. On the third floor of the building, which was only used as storage, a ghostly man in a wheelchair was often seen being pushed by another ghostly figure. The old Disciplinary Barracks operated from 1875 through 2002, when a new barracks was built.

The Officers’ Quarters located at 605 McClellan Avenue is said to continue to host a previous resident. The ghostly apparition of a man with a mustache and goatee once appeared in the fireplace in the middle of a burning fire. When the fire died out, the face continued to linger at the back of the fireplace. The apparition has also been seen in one of the bedrooms and once in the bathroom with an old-fashioned razor and shaving cream. At other times loud footsteps up and down the stairs, doors slamming shut, scratching noises and loud crashes throughout the house are heard. Residents also report icy cold spots in various parts of the house. 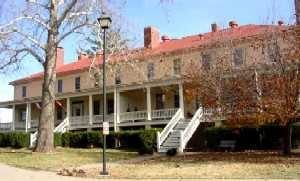 The Rookery, a duplex located at 12 and 14 Summer Place is the oldest house on the base and is said to be haunted by several ghosts. Built in 1832, the residence has been occupied continually since it was erected. The number of ghosts who haunt this old residence has given it the reputation for being the most haunted house in the State of Kansas. The most prevalent ghost is that of a woman with long hair who rushes at people with her fingernails clawing in attack. Said to have been the victim of violence long ago, her ghostly presence lingers within the Rookery.

Another apparition is that of an elderly woman who is often been seen chattering in the corner. A third ghostly specter is that of a young girl who is often seen throwing a tantrum. And, as residents are trying to sleep, they often report being rousted by an old man in a nightshirt with bushy hair. 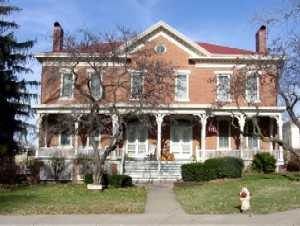 Sumner Place— The houses in this area are haunted by a kind woman in a black woolen dress and shawl. At one time this woman was supposedly the nanny/housekeeper who lived in the attic of one of these old homes. The benevolent spirit is said to look after the families in the area by trying to help with domestic chores, such as doing the dishes and making beds. Also drawn to children, she looks after them and tries to calm them when they are upset.

One child told his parents that this nice lady would read stories to him before he went to sleep and at one time a mysterious book was found in the child’s room that didn’t belong to the owners. However, the ghostly spirit evidently feels some animosity towards other babysitters or grandmothers that she considers competition. These people often report feeling a firm push out of the upstairs nursery by unseen hands. At one time the residents of 16 Sumner Place were so unnerved by her presence that an exorcism was conducted in the house. The lady in black left the residence, only to take up her duties again next door at 18 Sumner Place. Witnesses have also reported seeing her ghostly figure looking out of the attic window.

The National Cemetery — The ghost of a woman by the name of Catherine Sutter has often been reported walking among the tombstones of the cemetery. In the fall of 1880, Catherine, with her husband and two children stopped at the fort on their way to Oregon territory. One day, her husband sent the children out to collect firewood, but they never returned. 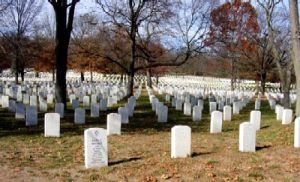 It has long been thought that the two children – Ethan and Mary, may have wandered near the river where they were lost in the current. Though a search party looked for the children for three days, they were finally given up for dead. The Sutters stayed on through the winter, hoping against hope that their children would be found. Catherine became a familiar figure at the fort as she spent many hours walking through the snow calling out to her children.  After all those endless hours in the cold, Catherine contracted pneumonia and died that winter. She was buried in the cemetery at Fort Leavenworth.

Desolate, Hiram Sutter returned to his home in Indiana in the spring. However, just a short time later, he received a message that his children were alive and well. Swept into the river, Ethan and Mary were rescued by a group of Fox Indians who took care of them until spring when they were returned to the fort.

However, Catherine obviously didn’t get the message that her children were safe and sound, as she continues to walk the fort in search of her missing children. Wearing an old calico dress and black shawl, she is often observed carrying a lantern and calling out in the darkness.

However, her apparition, wearing an old calico dress and black shawl, is still seen desperately searching for her lost children. Sometimes she is observed carrying a lantern, while other times just her voice can be heard, calling out from the darkness.

Another ghost reported in the cemetery is that of Chief Joseph, a proud Nez Perce Indian leader, who was incarcerated here in 1877.

Civil War soldiers have also been reported as walking through the nearby woods.

Fort Leavenworth is located two miles north of the city of Leavenworth on Highway 73 in the northeastern corner of Kansas.