Both sides were abetted by desperadoes and opportunists where people were tarred and feathered, kidnapped, and killed. Confrontation and deadly skirmishes over the issue of slavery would continue in the Kansas Territory for the next five years in an era to be forever known as “Bleeding Kansas”.

The word Jayhawker came from a mythical bird that cannot be caught. At first, the term was applied to both the pro-slavery and abolitionist rebel bands. But, before long it stuck to the anti-slavery side only.  Those that favored the Confederacy soon earned the name of Bushwhackers because they primarily lived in the “bush,” or country and their legs “whacked” the bushes as they rode. Both sides would eventually include semi-legitimate soldiers, and even grudgingly acknowledged by the Union and Confederate forces. However, other members of these two groups were simply bandits who had a quasi-military excuse for ambush, robbery, murder, arson, and plunder.

In 1856 the proslavery territorial capital was “officially” moved to Lecompton, Kansas. In April of that year, a three-man congressional investigating committee arrived in Lecompton to look into the Kansas troubles. The majority report of the committee found the elections to be fraudulent and said that the Free-State government represented the will of the majority. The federal government refused to follow its recommendations, however, and continued to recognize the proslavery legislature as the legitimate government of Kansas.

On May 21, 1856, a motley group of more than 500 armed pro-slavery enthusiasts raided Lawrence, the stronghold of the abolitionist movement. They burned the Free-State Hotel (now the Eldridge Hotel), smashed the presses of two Lawrence newspapers, ransacked homes and stores and killed one man. 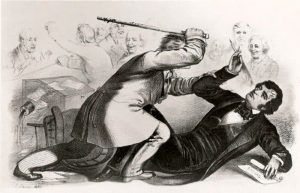 Not only was violence erupting in Kansas, but also in Congress itself. On May 22, 1856, Massachusetts Senator Charles Sumner was beaten unconscious by Preston Brooks, a congressman from South Carolina. Sumner had, just three days previously, made a fiery speech called “The Crime Against Kansas,” in which he accused proslavery senators, particularly Stephen Douglas of Illinois and Andrew Butler of South Carolina of cavorting with “the harlot, Slavery.” Preston Brooks, the nephew of Andrew Butler, believing that Sumner had insulted his uncle, walked into Sumner’s chambers where he slammed a metal-topped cane onto his head time and time again. His injuries stopped Sumner from attending the Senate for the next three years.

The caning of Sumner became a symbol in the North of Southern brutality. Meanwhile, while Brooks was initially censured for his actions, he became a hero in the South for defending the Southern honor and was subsequently reelected by his constituency.

On May 24, 1856, John Brown, self-appointed avenger, four of his sons and two other followers, raided a settlement on the Pottawatomie Creek in Franklin County, Kansas dragging five innocent proslavery men from their homes, they hacked them to death with artillery swords. After Osawatomie, John Brown earned the nickname “Osawatomie Brown” as he led anti-slavery guerrillas in the fight for a free Kansas during the rest of the year.

In retaliation, the town of Osawatomie was attacked by 400 pro-slavery Missourians in August 1856. John Brown, along with forty other men defended the town, but in the end, all but four homes at the settlement were burned by the invaders and John Brown’s son Frederick was killed. Four wagon loads of dead and wounded were brought into Boonville, Missouri when the invading army returned.

In September of 1856, a new territorial governor, John W. Geary, arrived in Kansas and began to restore order. However, his tenure was to be a short one as, when, in 1857, the Lecompton legislature met, it became clear that free elections would not be held to approve a new constitution and Geary resigned. Robert J. Walker was then appointed governor, and a convention was held at Lecompton where a constitution was drafted. Only that part of the resulting pro-slavery constitution dealing with slavery was submitted to the electorate, and the question was drafted to favor the pro-slavery group. Free-State men refused to participate in the election with the result that the constitution was overwhelmingly approved.

1857 was also the year that saw William Clarke Quantrill’s arrival upon the scene. The former Ohio school teacher moved to Kansas and took up farming for a time. However, he quickly honed his violent nature by living with thieves and murderers, committing several brutal murders during this time. The next year he rode West with a wagon train, supporting himself through gambling. Later he would return, taking an active part in the bloody battle between Kansas and Missouri.

Despite the dubious validity of the Lecompton Constitution, President James Buchanan recommended, in 1858, that Congress accept it and approve statehood for the territory. Instead, Congress returned it for another territorial vote, moving the nation closer to war.

On May 19, 1858, an armed action took place that would shock the nation and become known as the Marais des Cygne Massacre. After a raid through Kansas, where several unarmed Free Staters were killed, Georgia native Charles Hamelton, along with about 30 followers, was returning to Missouri when they captured eleven Free State men near the Marais des Cygnes on the Kansas-Missouri border. Many of these captives, some of which were former neighbors of Hamelton’s, expected no harm to come from him. However, the Bushwhackers herded the captives into a ravine and shot them, left them for dead and returned to Missouri.

Of the eleven Free Staters, five of the men died, five were wounded, and one, who had feigned death to escape injury, would crawl from the ravine to tell his tale to the nation. Baptist minister, Reverend Benjamin L. Read, immediately began to spread the word of the massacre which was soon chronicled by abolitionist writer John Greenleaf Whittier in a poem that appeared in the September 1858 issue of the Atlantic Monthly. As Whittier had intended, the story further inflamed abolitionist sentiment. The last verse of the poem read:

On the lintels of Kansas
that blood shall not dry;
Henceforth the Bad Angel
Shall harmless go by;
Henceforth to the sunset
Unchecked on her way,
Shall Liberty follow
The march of the day. 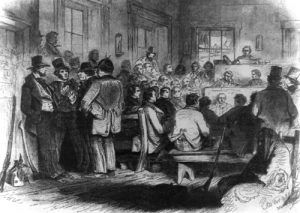 Finally, in July 1859, after several attempts were made to draft a constitution, for which Kansas could use to apply for statehood, a Free-State constitution was adopted. The constitution, which totally forbade slavery, was accepted by Congress; however, the pro-slavery forces in the Senate strongly opposed Kansas’ Free-State status and stalled its admission. The Kansas conflict and the question of statehood for the territory became a national issue and figured into the 1860 Republican party platform.

After such bloody encounters as Pottawatomie Creek, John Brown returned east and began to amass arms, making battle plans in earnest for a full-fledged invasion of the South. This plan was to culminate in the raid on Harpers Ferry, West Virginia. However, once John Brown and his followers had captured the arsenal, they found themselves trapped. They were then captured and turned over to state authorities.

In 1860, Charles R. “Doc” Jennison, leader of a Jayhawker band headed a posse that hanged two Missourians caught trying to return fugitive slaves to their masters.

“God sees it, I have only a short time to live–only one death to die and I will die fighting for this cause, there will be no more peace in this land until slavery is done for.

On January 29, 1861, Kansas was finally admitted to the Union as a Free-State. Her struggle over the still unsettled slavery issue came at a terrible cost and provided a last ominous warning of the peril that awaited the nation. Topeka became the state capital with Charles Robinson as the first governor and James H. Lane, an active Free-Stater, one of the U.S. Senators.