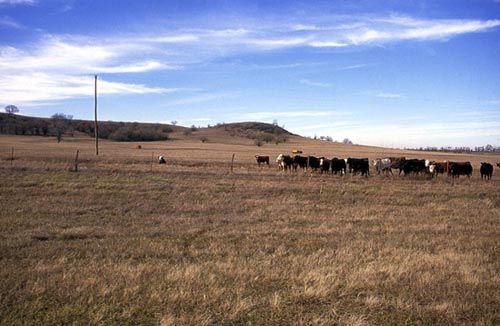 In the 19th century, Kansas was a bloody place, especially before the Civil War as “Free-Soilers ” and slavery advocates “duked” it out for control of the new territory. Once Kansas declared itself with the Union and the Civil War began to rage, the bloody battles continued. After the Civil War, as pioneers began to head westward along the many trails through Kansas, murder and mayhem persisted as hardened men from the battlefields, grown used to the violence, continued their violent ways along the overland trails and in the many cow towns. If not accosted by road agents, travelers also had to be concerned about Indian attacks. Southeast Kansas, in particular, was known as a rough area.

Though most of us know of Dodge City’s wicked ways, the deadly gunfight of the Daltons in Coffeyville, and the many outlaws and gunfighters who spent time in the Sunflower State, few aware of a family of mass murderers, living a supposed quiet life near the small town of Cherryvale.

Just after the Civil War ended the United States government moved the Osage Indians from Labette County in southeast Kansas to the “new” Indian Territory in what would later become the state of Oklahoma. The “vacated” land was then made available to homesteaders, who, for the most part, were a group of hard-working pioneers farming the area’s softly rolling hills and windswept prairies.

In 1870, five families of “spiritualists” settled in western Labette County, about seven miles northeast of where Cherryvale would be platted a year later. One of these families was the Benders, comprised of John Bender, Sr.; his wife, Almira; son, John, Jr.; and daughter, Kate. A cult-like group, the families chose from several available claims and began to make their homes. John Bender, Sr. chose a 160-acre section on the western slopes of the mounds that today continue to bear their name. The property was located directly on the Osage Mission-Independence Trail that operated from Independence to Fort Scott. His son chose a narrow piece of land just north of his father’s; however, he never lived on his claim, nor made any improvements.

The family soon built a small one-room framed cabin, a barn, corral, and dug a well.  Inside the wooden cabin, the area was partitioned with a large canvas, creating living quarters in the back and a small inn and store in the front. A crude sign was hung above the front door that advertised “Groceries” to the many travelers along the Osage Trail. The little “store” carried a few supplies such as powder, shot, groceries, liquor, and tobacco; sold meals, and provided a “safe” overnight resting place to the strangers along the road. 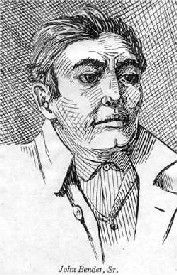 Keeping mostly to themselves, the Benders appeared to simply be struggling homesteaders who worked hard to earn their living like the other area pioneers. Immigrating from Germany, John Bender, Sr. was 60 years old when he arrived in the area; his wife about 55. Standing over six feet tall, John was a giant of a man who, because of his piercing black eyes set deeply under huge bushy brows, earned him the nickname of “old beetle-browed John.”  His ruddy face, mostly covered by a heavy beard, sullen expression and long hair often led to him being described as a “wild and wooly looking man.” 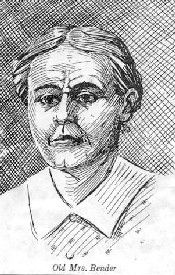 Both John and his raw-boned wife spoke with such guttural accents that few people could understand them. Mrs. Bender, a heavyset woman, was so unfriendly and had such sinister eyes, that her neighbors began to call her a “she-devil.” To add to her fierce look, Ma Bender also claimed to be a “medium” who could speak with the “dead” and boiled herbs and roots that she declared could be used to cast charms or wicked spells. Her husband and son were said to have feared her as she ran the household with an iron hand.

John Bender, Jr. was a tall, slender man of about 25 who was handsome with auburn hair and mustache. Speaking English fluently with a German accent, he was said to have been social but, he was prone to laughing aimlessly, which led many people to think of him as a half-wit.

Daughter Kate was the “friendliest” of the bunch, speaking good English with just a slight accent and bore cultivated social skills. A beautiful girl of about 23, she was quick to laugh and talk to strangers. She and her brother John often attended Sunday School at nearby Harmony Grove and were readily accepted in the community. 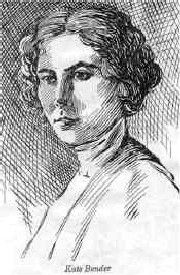 Kate was a self-proclaimed healer and psychic, gave lectures on spiritualism, and conducted séances.  She also claimed to possess psychic powers, including the ability to communicate with the dead. Distributing circulars that proclaimed her “skills,” including supernatural powers and the ability to cure illnesses and infirmities, she soon found the lecture circuit profitable.

The petite auburn-haired beauty had a desire for notoriety and often advocated free love and justification for murder in her lectures. Along with her desire for fame, she also craved wealth and position. Though her beauty and social skills gained her popularity with the locals, her actions began to cause them to say that she was “satanic.” It was to be this diminutive Bender family member that would take most of the blame for what was soon to be found out about this infamous family.

When the Benders opened their store and inn in 1871, many travelers would stop for a meal or supplies. However, some of those men, who frequently carried large sums of cash with the intention of settling, buying stock, or purchasing a claim; began to go missing. When friends and family began to look for them, they could trace them as far as the Big Hill Country of southeast Kansas before they could find no trace of the lost traveler. 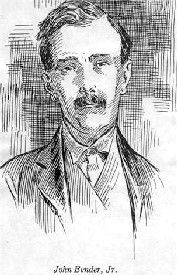 These first few missing travelers did not raise an overall alarm in the area as it was not uncommon during those days for men to simply continue their journey westward. However, as more time passed, the disappearances became more frequent and by the spring of 1873, the region had become strife with rumors and travelers began to avoid the trail.

When neighboring communities started to make slanderous insinuations, the Osage Township called a meeting held at the Harmony Grove schoolhouse in March to see what, if anything, could be done. About 75 people attended the gathering, including both Bender men.

The discussion began regarding the ten people who were reported missing, including a well-known Independence physician named Dr. William H. York. With the full realization that there truly was a major problem in their township, the group decided to search every farmstead between Big Hill Creek and Drum Creek. When most of the attendees volunteered to have their premises searched, the Benders remained silent.

Sometime later, Billy Tole, a neighbor of the Benders, noticed that the Bender Inn was abandoned and their farm animals unfed. Tole reported the news to Leroy F Dick, the Township Trustee, and a search party was soon formed, which included Dr. York’s brother, Colonel A.M. York, of Fort Scott. When the men arrived at the property, they found the cabin empty of food, clothing, and personal possessions. They were also met by a terrible smell inside the abandoned inn. A trap door, nailed shut, was discovered in the floor of the cabin.

1 thought on “The Bloody Benders – Serial Killers of Kansas”