Located on the north bank of the Smoky Hill River, about 95 miles west of Topeka, Kansas, Abilene is the county seat and largest city of Dickinson County. Though best known as the Queen of Kansas Cowtowns, Abilene already existed for a decade before the cattle came to town.

First settled in 1858, it was named by Timothy and Eliza Hersey from a passage in the Bible, meaning “city of the plains.” The first terminus of and later a station on the Butterfield Overland Stage Line, the Hersey’s secured a contract with the company to feed the passengers and employees. The establishment, consisting of two log houses, a log stable, and corral for horses, advertised to the westbound traveler: “the last square meal east of Denver.”

The next structure built was a dwelling known as “the Hotel,” owned by C. H. Thompson, and located on the east bank of Mud Creek. More homesteaders began to come to the area and among one of them was a man commonly known as “Old Man Jones,” who erected a log house which he turned into a store, selling some limited supplies, but mostly whiskey. 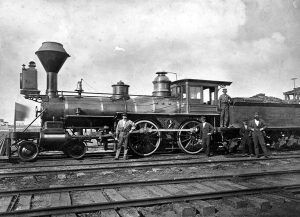 Seeing the coming of statehood for Kansas Territory, C.H. Thompson first laid out the town in 1860, hastily constructing some makeshift log houses to give it some semblance of a town. The following year, Abilene became the Dickinson County Seat. In 1864 Dr. W. S. Moon built the Frontier Store east of the creek, carrying a small stock of general merchandise. Moon became the first postmaster and well as the Registrar of Deeds. The growth of the town was rather slow until after the Kansas Pacific Railroad was completed to Abilene in 1867.

However, its sleepy little existence changed when a livestock dealer from Illinois, named Joseph G. McCoy saw Abilene as the perfect place for a railhead from which to ship cattle from. McCoy chose the site because of the abundance of grass and water in the area. Before the town developed into a major shipping center, McCoy described it as: “Abilene in 1867 was a very small, dead place, consisting of about one dozen log huts, low, small, rude affairs, four-fifths of which were covered with dirt for roofing; indeed, but one shingle roof could be seen in the whole city. The business of the burg was conducted in two small rooms, mere log huts, and of course, the inevitable saloon, also in a log hut, was to be found.”

But, McCoy would change that. He soon sent circulars all over Texas advertising Abilene as a new shipping point, and built a stockyard and a hotel called the “Drover’s Cottage.” Before the close of the year 1867 some 35,000 cattle had been driven there for shipment on the new railroad to the eastern markets. Under his leadership, the town reigned as the primary market for Texas cattle for four years.

Though the new shipping point stimulated the growth of the town, it also brought in many undesirable characters, including gamblers, confidence men, cowboys, soiled doves, and more. Much to the chagrin and disgust of the reputable, law-abiding citizens, these “undesirables” practically took possession of the place. Shooting affrays were common, and the turbulent element, being in the majority, continued to run things with a high hand, until the probate court of Dickinson County granted a petition to incorporate Abilene on September 6, 1869. Joseph G. McCoy was chosen as the first mayor and the new city government began to take steps to check the prevailing lawlessness.

The town began to build a stone jail, but about the time the walls were up, a band of cowboys tore them down. In 1870, a new brick and stone courthouse was built at the corner of Broadway and Second Streets. The same year, the much-needed Merchant’s Hotel was built by Kerney & Guthie, a two-story building that provided a place to stay for the many cowboys. 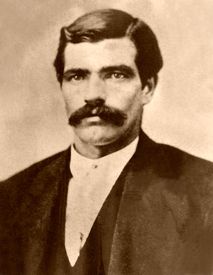 Desperately seeking a lawman, the City of Abilene hired Thomas J. “Bear River” Smith, who had come to Abilene from Kit Carson, Colorado, as the town’s first Chief of Police on June 4, 1870. It was said of him at the time that his appearance was against him, but, what he lacked in physical strength was more than made up in courage and diplomacy. One of his first official acts was to issue an order that no one would be allowed to carry firearms within the city limits without a permit. Smith’s ability was well enough respected that even the most troublesome cowboys and gamblers obeyed.

Known as the “No gun marshal,” he gained a reputation for subduing assailants with his fists rather than a gun and within a short time, he succeeded in disarming most of the desperate characters,  bringing about a reign of law and order.

But, Smith’s Abilene career would be cut short on November 2, 1870, when he was attempting to arrest an accused murderer named Andrew McConnell. The outlaw shot Smith, but the lawman returned fire, wounding McConnell, before falling to the ground. McConnell’s co-conspirator in the original crime, a man named Miles, then struck Smith with his gun, grabbed an ax, and nearly chopped Smith’s head from his body. McConnell was sentenced to twelve years in the state penitentiary and Miles received a 16-year sentence for their gruesome crime. 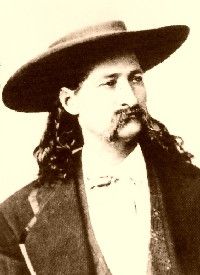 Tom Smith’s successor as a city marshal was the famous Wild Bill Hickok, who was already well known before he came to Abilene, for deadly marksmanship and gunfighting skills. Appointed on April 15, 1871, Wild Bill at first tended to routine business, using his deadly twin pistols to prevent a number of murders and destruction of property throughout the town. Early on, Hickok ran into the likes of John Wesley Hardin, who Hickok actually befriended until Hardin shot a man and fled Abilene.

However,  Hickok spent most of his time in the Alamo Saloon, the center of the town’s wildlife, and was not too friendly with the “upstanding” folks of Abilene. Instead, he spent more time at the gaming tables and with the ladies of the evening than he did taking care of his sheriff duties.

Though he stopped the gunplay simply with his reputation and convinced the renegade cowboys that he meant business and that the law would be enforced, he made little other attempts to “clean up” the town. 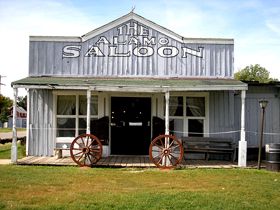 However, Wild Bill did have to do some marshaling when shots were heard near the Alamo Saloon on October 5, 1871. Discovering that it was a man named Phil Coe who had shot at a dog that had tried to bite him, Wild Bill explained to Coe that firearms were not allowed in the city.

But, for whatever reasons, all hell broke loose and Coe sent a bullet Hickok’s way. Bill returned the fire and shot Coe twice in the stomach. Suddenly, Hickok heard footsteps coming up behind him and turning swiftly; he fired again and killed Deputy Mike Williams. Coe died three days later. (See Hickok-Coe Gunfight)

By this time, Abilene had had enough. The city fathers told the Texans there could be no more cattle drives through their town and two months later, dismissed Hickok as city marshal. It was the last big year for Abilene, as more than 40,000 head of cattle were shipped out by rail. New railheads were by then built to Newton, Wichita, and Ellsworth, becoming the favored shipping points. During its four year reign, over 3 million head of cattle were driven up the Chisholm Trail and shipped from Abilene. With the cowboys gone, the town quieted down into a peaceful, law-abiding community. 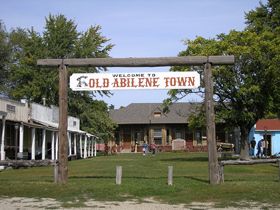 Later, Abilene could make another claim to fame when future President Dwight D. Eisenhower’s family moved there from Denison, Texas in 1892. Eisenhower attended both elementary and high school in the city and always called it “home.” When he died, it became his final resting place, along with his wife, Mamie, and one son.

By 1910, Abilene had moved on and boasted a population of 4,118. Its location at the junction of the Union Pacific, Chicago, Rock Island & Pacific, and the Atchison, Topeka & Santa Fe Railroads made it an important shipping point, and large quantities of grain and livestock were annually exported. By this time, the city had also diversified, having a number of manufacturers including flour mills, creameries, foundries, an organ factory, planing mills, cigar, carriage and ice factories, and more.

Today, the City of Abilene is a diversified agricultural community boasting a population of some 6,500 people. It remains the county seat of Dickinson County. 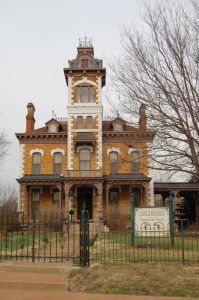 The city provides a number of museums and attractions featuring its rich history including the Eisenhower Center, consisting of a Visitors Center, Presidential Museum, Research Library, and the original Eisenhower family home; the Dickinson County Historical Museum, which features life on the plains during the westward expansion period; the C.W. Parker Carousel, a 1900 National Landmark; American Indian Art Center dedicated to promoting Native American artists in the region, and more.

An absolute “must-see” in Abilene is the reconstructed “Old Abilene Town.” An authentic replica of the cattle capital as it was during its roaring hey-days, Old Abilene Town is not far from the original townsite. Though most of the buildings have been recreated, several of them, including all of the log structures and the red schoolhouse, are the originals.

They were moved to the site and rebuilt. The Merchant’s Hotel is an almost exact replica of the original hotel of the same name, and the Alamo Saloon is a duplicate of the most famous early day house that kept open around the clock to entertain the cowboys. 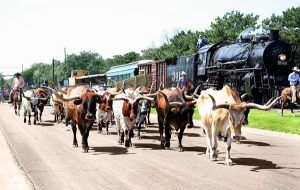