Towanda got its start when people in the area got word that the Chicago & Mississippi Railroad would be coming through and several area men decided to plan a village. A man named P.A. Bedeau donated 40 acres to establish a downtown area in 1853 and Jesse W. Fell, the founder of Illinois State University, donated additional land adjacent to the townsite. It is believed that Towanda, Pennsylvania was the inspiration for the name of the new town, since the former had been the birthplace of Jesse Fell. Mr. Fell was evidently unaware that the word “Towanda” is derived from an Indian word that means “burial ground”.

A survey was soon taken and the men began to sell lots to businesses and individuals. The railroad came through in 1854 and became known as the Chicago, Alton and St. Louis Railroad. The first station was built the same year, the first building on the new townsite. The village was bisected diagonally by the railway with the business section located on one side and grain elevators, implements, and lumber on the other. For decades the railroad was central to the life of the residents and local farmers.

One of the largest buildings to be erected on Main Street was the Roadnight Hall. Charles Roadnight, then treasurer of the Chicago & Alton Railroad, owned a great deal of land on each side of the railroad.

His building was large — 50′ x 100′ with an ornate front, frame back and brick ends. The upper floor housed a ballroom and was used as a community center. The lower floor was used for business concerns.

Hoping for a boomtown, the building quickly became famous in its time for the elaborate expenditures which Roadnight lavished upon it. It was also considered to be a very modern and outstanding for its day and patronized by the wealthy society of Bloomington and other towns. But, Mr. Roadnight’s dreams would not come to fruition. Towanda would remain a small rural agricultural community up until the present time. His building was sold and utilized for various purposes over the years until it burned in 1905.

On June 3, 1854, William D. Moore was appointed postmaster and the post office was located in his home just north of the Village on the H. V. Hilts farm. That same year Towanda gained a one-room schoolhouse west of Jefferson St., on Monroe. The first teacher was N. M. Jones. As late as 1863 the building was in use for a meeting in connection with a call for Civil War volunteers.

Mail was contracted to be carried by train in 1855 and a post office building was established on Main Street. A good flour mill was erected by Roadnight and Strothers, but did not long continue in use. Henry Warner’s mill met with a similar fate. The first sawmill in Towanda Township was erected on Money Creek and later, another within the corporate limits of Towanda and operated by Frank Snodgrass on the corner of Adams and Taylor street for over 30 years. Much of the rough lumber for farm buildings in the surrounding area was sawed at this mill.

Perhaps one of the most exciting events in the town’s history was the attack on the Buena Vista Tavern in the late 1860s. Several years before Carry Nation gained her fame, a group of local women took exception to the amount of money their menfolk were spending on whiskey. The women, having met by prior secret arrangement at a hardware store in Towanda, secured hatchets and marched to the Buena Vista, one of town’s three saloons. They entered, the four men playing cards fled, and as the bartender watched in stunned silence as the women proceeded to wreck the place. Furniture was destroyed, bottles broken and barrels and kegs stoved in, and items thrown through the tavern windows. Each of the women was fined one dollar.

Duncan Manor, also called the Duncan Mansion or Towanda Meadows, was built in about 1869 by William R. Duncan,  a successful livestock dealer who moved to the Towanda area from Kentucky in late 1863, during the Civil War. In its prime, the house was very elegant with its chandeliers, porcelain door knobs, copper bath fixtures, six marble fireplaces and a three-story winding walnut stairway. The first and second floor rooms had eleven-foot ceilings, while those on the third floor were nine feet in height. The walls were about a foot thick and some of the doors were ten feet high. Unfortunately for Mr. Duncan, he died of an illness in the autumn of 1876.

Afterward, the beautiful building changed hands several times and was often occupied by renters or tenant farmers. During these many years, the house was never modernized in such a way that would change the basic structure of the building. At some point, the building sat vacant and was vandalized. However, it has now been privately purchased and is undergoing a beautiful restoration. Sitting on a hill just south to Towanda, the mansion on the hill has inspired much interest from the public over the years.

In 1873-1874 wooden sidewalks were being built and the following year the Towanda was incorporated into a village.

Around the turn of the century, Towanda was fairing well and had become self-contained, with doctors, cafes, groceries, blacksmiths, churches, schools, a drugstore and a bank. 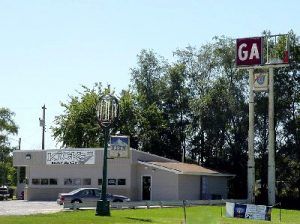 During the mid-20th century, Route 66 passed through the village and was a major source of business and income.

When you first enter the town you’ll see the remnants of Eddie’s Pure Oil Truck Stop that opened in the late 1940s, but died when the Interstate bypassed this small town.

Other sights to see in this vintage village the Kick’s Route 66 Bar and Grill housed in an old gas station and Schenks’ Garage which features old Route 66 memorabilia.

As you are leaving Towanda, keep your eyes open for an old vintage bridge alongside the road before traveling on down Route 66 to Normal and Bloomington, Illinois.