Located at the confluence of the Mississippi and Ohio Rivers at the southernmost tip of Illinois is the town of Cairo, pronounced “Care-O.” By far, one of the strangest and saddest cities I’ve ever visited, I was immediately intrigued by the empty streets and abandoned and crumbling buildings. 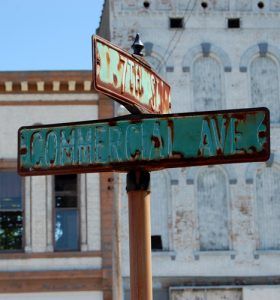 On our first visit in 2010, we passed under an arch depicting “Historic Downtown Cairo” to take a peek at this city that has been standing on the river for more than 150 years. Though the town had a population of some 2,800 people and is the county seat of Alexander County, its Main Street, called Commercial Avenue, was empty of people and lined with buildings in various stages of decay. Doors stood wide open on commercial buildings that displayed rubble-filled interiors, windows were broken or boarded up, Kudzu crawled up brick walls, streets signs were faded and rusty, and the streets and sidewalks were cracked and choked with weeds. On a side street, the once lovely Gem Theatre stood silent next to the Chamber of Commerce. In other parts of the city, the large brick hospital was overgrown with vegetation, churches were boarded up, and restored mansions sat next to abandoned and crumbling large homes.

What has happened here? I was sure, with Commercial Avenue’s proximity to the Ohio River, the town had been devastated by a flood; but, I didn’t know and found no one to ask. Finally, after wandering about the deserted buildings for a time, an elderly gentleman parked his truck and walked out along the river, so I stopped and asked him. He told a brief story of how the town was destroyed by its own residents and points out a building that once served as a fine dining and dancing establishment that he and his wife enjoyed decades ago.

It’s only later, when I return home to do the research, that I discover that Cairo died because of racism.

The peninsula where Cairo now stands was first visited by Father Louis Hennepin, a French explorer and missionary priest in March 1660. It was noted again by other traveling priests over the next few years, but, it would not be settled until 1702, when French pioneer, Charles Juchereau de St. Denys and a party of about 30 men built a fort and tannery a few miles north from the confluence of the Ohio and Mississippi Rivers. The party of men was extremely successful in collecting thousands of skins for shipment back to France. However, the next year the fort was attacked by Cherokee Indians who killed most of the men and seized the furs, effectively ending the life of the fort and tannery. 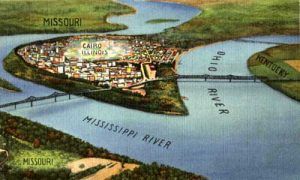 Cairo, Illinois at the confluence of the Ohio and Mississippi Rivers.

Nearly a century and a half later, Lewis and Clark left Fort Massac, Illinois and arrived in the vicinity of what would later become Cairo in November 1803. Here, they worked jointly on their first scientific research and description; to study geography at the junction of the Mississippi and Ohio Rivers. On November 16, they began the diplomatic phase of their journey when they visited the Wilson City area of Mississippi County, Missouri, and met with Delaware and Shawnee Indian chiefs. They ended their surveys at Cairo on November 19th, and proceeded up the Mississippi River, now working against the current.

The first attempt at settlement occurred in 1818 when John G. Comegys of Baltimore, Maryland obtained a charter to incorporate the city and the Bank of Cairo from the Territorial Legislature. He bought 1,800 acres on the peninsula and named it “Cairo,” because it was presumed to resemble that of Cairo, Egypt. Working along with Comegys, was Shadrach Bond, who was the first governor of Illinois. These men and other speculators invested and tried to develop Cairo into one of the nation’s great cities.

The land of the peninsula was to be made into lots and sold, a portion of the money put into improvements, and the rest of it was to constitute the capital for the new bank. The peninsula was surveyed and the city was platted. However, when Comegys died in 1820, his plan died with him. But, he left behind a contribution in his choice of the name Cairo, and as a result, “Egypt” became the popular nickname for southern Illinois. 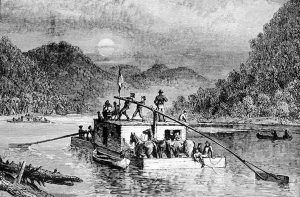 Flatboat on the Ohio River

A second and successful attempt at settlement began in 1837 when the Illinois State Legislature incorporated the Cairo City and Canal Company, with Darius B. Holbrook, a shrewd businessman from Boston, Massachusetts as president. Holbrook soon hired several hundred workmen who constructed levees, a dry dock, a shipyard, sawmills, an ironworks, a large two-story frame hotel, a warehouse, and several residential cottages. A store was kept in a boat.

The city’s future looked promising as work on the Central Illinois Railroad brought a great many people to the vicinity of Cairo. In the meantime, a number of farms were established and area villages in the county were flourishing.

The settlement was widely advertised in England, where the bonds of the Cairo City and Canal Company found eager purchasers through the London firm of John Wright & Company. However, when the London firm failed in November 1840, the fledgling town of Cairo immediately declined, dropping in population from 1,000 to less than 200 within two years. Those who remained operated shops and taverns for steamboat travelers. The census of 1845 showed 113 people in 24 families. 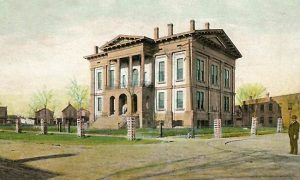 For more than a decade, the “town” languished, but, in 1853, the company began to sell lots in anticipation of the railroad arriving in the area. When the Illinois Central Railroad was completed in 1856, which connected Cairo to Galena, Illinois in the northwest corner of the state, the town really began to grow.

At that time, expectations were still running high when Cairo was predicted to surpass St. Louis, Missouri, Louisville, Kentucky; and Cincinnati, Ohio as an urban center. Some even recommended that the city should become the capitol of the United States. Of course, despite these boasts, the city did not prosper to such an extent.

In 1858 the town was incorporated and two years later, its population exceeded 2,000. It quickly became an important steamboat port, as goods and supplies were moved further south to New Orleans. In 1859, the city shipped six million pounds of cotton and wool, 7,000 barrels of molasses, and 15,000 casks of sugar. In 1860, Cairo became the county seat of Alexander County. An elegant courthouse was built in 1865 that continued to stand until the 1960s when it was torn down and replaced with a new one. 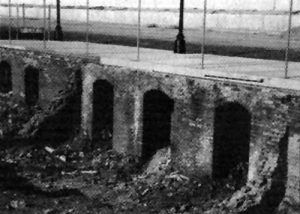 The old Illinois Central Railroad storage bins near the Ohio River were used as hiding places for slaves traveling the Underground Railroad through Cairo.

Prior to the Civil War, the city also became an important transfer station on the Underground Railroad. After the completion of the Illinois Central Railroad, fugitives were shipped north on the river before being transferred to railroad lines headed toward Chicago.

More than a century and a half later, In June 1998, Cairo city workers discovered what appeared to be storage bins under the sidewalk along the 600 block of Levee Street. The Illinois Central Railroad originally ran down the street and the structures date back to the late 1850s. Physical evidence suggests that the rooms and an adjoining tunnel ran for five or six blocks along the street and were utilized to hide and move fugitive slaves.

In 1858, the grandest hotel in the city was built at the southwest corner of 2nd and Ohio Streets. The St. Charles Hotel opened in January 1859. During the Civil War, it would, at different times, become the headquarters of General Ulysses S. Grant and General John A. McLernand, and filled to full capacity. Later, in 1880, the business was purchased by the Halliday Brothers, who vastly improved it and renamed it the Halliday Hotel. For decades it would be known as the best hotel in the city. Unfortunately, it burned to the ground in 1942.