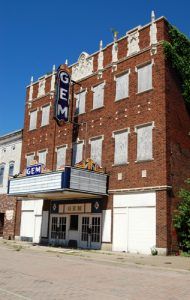 Though the racial tension continued, the town continued to thrive. In 1910, the historic Gem Theatre opened its doors to much acclaim. Seating 685 people, it was a cultural hot spot in the town. Unfortunately, a fire completely gutted the theatre in 1934, but it was rebuilt two years later including a new, elegant marquee. The Gem continued to operate for nearly another half-century before it was closed in 1978. Unfortunately, though the vintage theatre still stands, it has been long-vacant and has fallen into serious disrepair.

In the meantime, Cairo’s reputation was developing a “mean, hard edge,” which was backed up in 1917 when the city had the highest arrest rate in the state with 15% of its population incarcerated at one time or another. This reputation, which would get worse before it was over, still lasts to this day, even though Cairo’s “meanness” is long past and its citizens work together to do what they can to save their dying town. 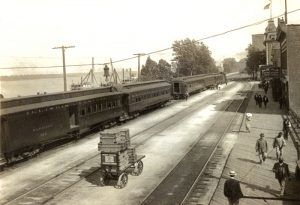 Shipping along the Ohio River in Cairo, Illinois in 1917.

Like many other cities across the continent, the 1930’s and the Great Depression hit Cairo hard. The town’s population and fortunes began to dwindle.

In 1937; the focus changed to another potential disaster when in February, the Ohio River swelled to record heights. The flooding inundated the towns of Paducah and Louisville, Kentucky, as well as Cincinnati, Ohio, and scores of other smaller communities and as the huge crest moved downstream to the Mississippi River. Newsreel cameramen and newspaper correspondents rushed into Cairo to report the anticipated catastrophe. Women and children were evacuated from the city and a three-foot bulwark of timbers and sandbags was hastily built atop the levees. But, lucky for Cairo, the water rose swiftly to within four inches of the bulwark, wavered several hours and began to slowly recede. Of all the cities on the lower Ohio River, Cairo alone withstood the flood.

Though the citizens saved the town from flooding, its rough reputation was continuing, as the same year, it had the highest murder rate in the state. At the same time, its prostitute population was estimated to be over 1,000. And, for Cairo, conditions would get even worse. 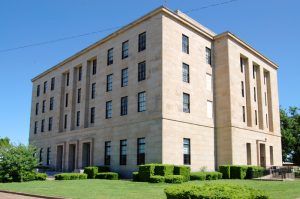 The United States Courthouse and post office was built in Cairo, Illinois in 1942. Photo by Kathy Weiser-Alexander.

In the early 1940s, 12 serious fires destroyed businesses, most of which were never rebuilt. However, a Federal Courthouse, which also included a post office opened in 1942. The building continues to serve as both a post office and as the District Court for Southern Illinois.

Making matters more difficult, after World War II was over in 1945, the town suffered from extremely high unemployment rates rather than flourishing like many communities across the Midwest. This further increased its crime rate and the city became a haven for organized crime. By the 1950s, the Illinois Senate began investigating a $20 million bootlegging operation that was sending large amounts of bootlegged liquor into nearby “dry” states.

There were, in fact, a number of mobster groups operating in Cairo, not only running bootlegged liquor but, also operating profitable slot machine rackets. The various groups brought more violence to the city, as the gangsters tried to squeeze out their rivals, smashing slot machines, firebombing cars, and killing each other. On July 19, 1950, $20,000 worth of gambling equipment was confiscated from simultaneous raids on six night clubs and taverns in or near Cairo. Just a month later, at the height of the gambling raids, five State Police were charged with theft of $150 from slot machines confiscated during a raid in Cairo.

Over the years, Cairo’s population began to decline due to the violence and the decrease in river trade. This decline; however, would not lead to Cairo’s ultimate demise – instead, it was racism. 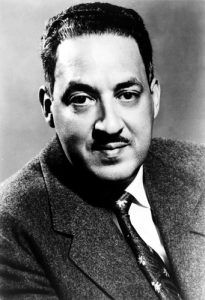 The first major push for racial equality occurred in 1946 when black teachers filed a lawsuit in federal court to secure equal pay. When the case was argued the same year by famed attorney, Thurgood Marshall, the judge, and defense counsel continuously referred to Marshall as a “boy.” Defense counsel then went on to explain to the court how a comparable case in Tennessee had been handled by a distinguished attorney who knew what he was doing, unlike the “boy” in this case. When the Defense counsel had completed his pontificating speech, Marshall quietly stood up and thanked counsel for the compliments, then informed the court that he was the brilliant attorney who had handled the case in Tennessee. Marshall would become the first African American justice on the United States Supreme Court in 1967, and served on the court until 1991.

Six years later, in 1952, efforts were begun to integrate Cairo’s schools but, separate black schools would not be abolished until years later in 1967.

By 1960, the town supported only about 9,000 people. That number would, unfortunately, drop more drastically over the next few decades, as racial tensions in the town escalated into a full-blown “war.”

By this time, the old scars of racism had hardened, and Cairo’s racial divide was starkly drawn. The city’s black citizens couldn’t get work in white-owned businesses and when rural whites from Kentucky and Missouri were hired instead of local blacks, the African-Americans rebelled. By 1962, local freedom movements were breaking out in communities all over the country, though they were seldom reported by the national media. 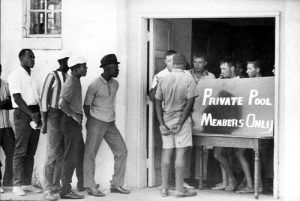 Demonstration of the segregated pool in Cairo, by Danny Lyon, 1962.

The city facilities were completely segregated, including public housing, local parks, and seating in the courthouse. Almost all public and private offices employed only whites. During this time, the public swimming pool became a “private club,” in order to keep out the black population. Requiring a “club” membership card to enjoy the cool waters of the pool, a large group of Civil Rights activists demonstrated at the pool in 1962, which spawned a white racist to deliberately drive his pickup truck into the demonstration, severely injuring a young African-American girl. The segregated swimming pool was finally closed in 1963 to avoid integration.

At about the same time, a demonstration occurred at the local roller skating rink to integrate the facility. When the group arrived; however, the skating rink owners had locked the doors, and the KKK was holding a meeting inside. Someone had stuck a note in the door with an ice pick that said, “No n____ here!”

Full-out “war” began in 1967 after the suspicious death of a 19-year-old black soldier, who was on leave, occurred while he was in police custody. Deemed to be suicide by the authorities, the black community disagreed and led by Cairo native Reverend Charles Koen, they rose up in protest against not only Hunt’s death but also a century of harsh segregation. Resulting in a riot, the whites quickly formed Vigilante groups, and the violence increased to such an extent that the Illinois National Guard was called in to quell racial hostilities.

That same year, Preston Ewing, Jr., Cairo’s NAACP president, wrote a letter to Adlai Stevenson, the state treasurer, reporting that Cairo banks would not hire blacks. The state responded by telling the banks they must hire blacks or it would remove its money from them.

Another black soldier, named Wily Anderson, who was on leave, was killed by sniper bullets. A week later, a white deputy named Lloyd Bosecker was shot in retaliation. Cairo police charged four blacks in connection with the shooting and eleven others for violations of an anti-picketing law.

Little League baseball was canceled to keep black children from playing, and a private “all-white” school was established. By 1969, black citizens were not allowed to gather at sports activities, in local parks, or form marches without being threatened by local police or a Vigilante group called the White Hats.