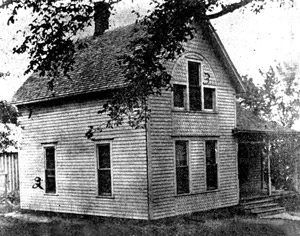 As the investigation continued, the focus turned to locals in the community and a number of possible suspects emerged. The speculation of the townspeople caused them to identify themselves by who they believed committed the crime. Friendships became strained and in many cases, irretrievably broken.

One of the first suspects was Sarah’s brother-in-law, Lee Van Gilder, who was the ex-husband of her sister, Mary. A man prone to violence and having previous brushes with the law, there was bad blood between him and the family. Van Gilder; however, was later cleared.

Looking at motive, the authorities began to investigate Frank F. Jones, a prominent businessman and Iowa State Senator. For years, before he opened his own business, Josiah Moore had worked for Frank Jones as a top salesman in Jones of Villisca, a hardware and implement store. In 1907, Josiah left the company and started a competing business, taking with him the coveted John Deere franchise. The two became bitter enemies, so much so that by 1910 they wouldn’t speak and would cross the street to avoid meeting each other.

Not believing that Jones would commit the crime himself, investigators began to look at a man by the name of William Mansfield, who from a “tip,” had learned he may have been hired by Senator Frank F. Jones  to murder the Moore family. In July, 1916, Mansfield was arrested in Kansas City, Kansas and extradited to Iowa to face a Montgomery County Grand Jury. Though local opinion anticipated Mansfield would be bound over for trial, the jury refused to indict him on grounds that his alibi checked out. In the meantime, Frank Jones lost his re-election as senator, but, was never charged with a crime. 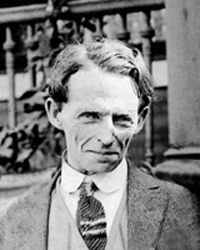 Another suspect was the Reverend George Kelly, who was a traveling minister who happened to be teaching at the Children’s Day services at the Presbyterian church, which the Moore family attended on June 9, 1912. The tiny, nervous, bird-like preacher had a reputation of being unbalanced and perhaps a pedophile and had left Villisca very early on the day of the murder. It was not these facts; however, that led to his being investigated.

Rather, it was an obsession that he had with the murder that turned law enforcement’s eyes on him. His obsession resulted in a stream of long, rambling letters sent to state and local investigators, private detectives, and relatives of the victims.

On his next preaching visit to Villisca two weeks after the crime, he arranged to stay over on Monday and visited the murder house. Within a month, officials began to investigate him finding out that he had been seen peeking into a woman’s bedroom just days before the murder and had been observed in several towns prowling streets late at night. He had also made specific requests that young women pose nude for him on at least three occasions. They also cited a disturbed mental state including his sexual obsession and a bloody shirt he sent to be laundered the week after the murder.

Kelly was arrested in April, 1917. As the trial drew near, state officials decided on one final all-out effort to get him to confess. After a long evening of interrogation, Kelly dictated a confession on August 31, 1917. The confession stated that he had difficulty sleeping the murder night and went for a walk, during which he spied the Stillinger girls getting ready for bed through the window. He then went on to say that he heard the Lord’s voice commanding him to “suffer the children to come unto me.”

The trial began on September 4, 1917 but was dismissed on September 28th as the jury was deadlocked eleven to one for acquittal. A second trial in November resulted in Kelly being acquitted for all charges.

By the time the trial began, a majority of Montgomery County citizens were convinced that Kelly was being framed as part of a conspiracy led by Frank Jones. They believed that Jones had tried to use his money and influence to pack the jury.

Another suspect was Henry Lee Moore (no relation to Josiah Moore), who was thought to be a serial killer. Several months after the Villisca murder, Henry was convicted of the murder of his mother and grandmother with an axe. He was also suspected of the killings in Colorado Springs, Colorado, and Ellsworth and Paola, Kansas. The cases were similar enough that all were committed by the same person; however, this was never proven.

In the end, the police and investigators gave up in 1917. The murders remained unsolved and the killer unpunished. Today, the remains of those murdered by the mysterious axe-man lie in the Villisca Cemetery. The “Murder House” continues to stand. 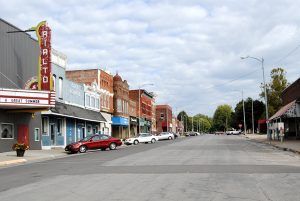 Villisca is a small agricultural town of about 1,300 people today. Kathy Weiser-Alexander, September, 2011.

The house where the murders took place was originally built in 1868 and the Moore family purchased it in 1903. After their deaths, the house went through the possession of eight people, until it was purchased by Mr. and Mrs. Darwin Linn in 1994.

By that time, the house had deteriorated badly and was close to being condemned. However the Linns restored the old house to its original condition and in 1998 it was added to the National Register of Historic Places. Today, it is open for tours and overnight sleepovers. And, it should come as no surprise that it is haunted, so much so, that it is consistently rated in the top ten most haunted places in America.

Over the years, there has been a long history of paranormal happenings in the house. Previous tenants have said they have spied a shadowy man with an axe standing at the foot of their bed, images of bloody shoes, closet doors that open of their own device, the sounds of children crying, and clothing taken from dressers and closets and strewn about the room.

In one instance a man reported that while sharpening a knife, it suddenly turned around and stabbed him in the thumb. He explained that it felt as if someone had a grip on his wrist. One family who reportedly ran out of the house screaming one night, moved out that very day. 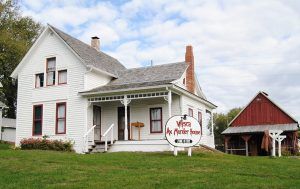 Since the house was opened to tours and overnight stays, a number of paranormal investigations have been conducted, which have allegedly provided audio, video and photographic proof of paranormal activity. When the house was investigated by the Travel Channel’s Ghost Adventures Crew, they captured a recording of a man who said “I killed six kids.”

Yet others, who have toured the house, have reported hearing children’s voices when none are present, whispers, banging sounds, falling lamps, and objects that move of their own accord. Some have reported feeling an evil presence in the attic where it is thought the murderer hid while waiting for the family to fall asleep. One story alleges that as one an individual tried to enter the attic, an unknown force prevented her from doing so.

Though there are many that say that the house is truly haunted, there are many who say it is not, including some who actually lived in the house without ever experiencing any mysterious activities. You can judge for yourself, by making a visit to the home, which is open for tours.

Most Haunted Places in America

1 thought on “Villisca, Iowa and the Axe-Murder Man”