During the fracas, McCluskie received three pistol shots, any one of which would cause death. He must have exhibited great courage and bravery ere the fatal bullets pierced his body, for the barrels of his six-shooter, when picked up, were found to have been emptied of their charges. He lived but a few hours.

Another Texan, whose name we have been unable to ascertain, was also shot and killed.

As far as we have been able to learn the names of the wounded are as follows: Pat Lee, a brakesman on the railroad, a looker-on, in the abdomen, probably fatally; Billy Garrett, a Texan, in the arm, slight; _______ Hickey, a section boss on the railroad, in the calf of the leg, slight; Jim Wilkerson, a Texan, in the nose, slight; Henry Kearnes, in the right breast, fatal; Hugh Anderson, the supposed instigator of the riot, thigh and leg, not serious. The brakesman, Lee, and Kearnes, will probably die.

On Monday evening last threats were made, by many desperadoes, that in case Tom Carson, late a policeman in Abilene [under Wild Bill Hickok, city marshal], was placed upon the police force, that they would kill him. He was, however, appointed a police officer, and that evening patrolled his allotted beat as unmolested as if he were in Abilene, no disturbance whatever occurring.

Thus ends the third or fourth chapter in Newton’s bloody history — a town only a little over three months old. Let its police force be strengthened by good and honest men, and all violators of the law be made to suffer the extreme penalties of its wise provisions. Then bloodshed will cease. But if the worse than beastly prostitution of the sexes is continued, and the town is controlled by characters who have no regard for virtue, decency or honor, it will not soon become fit for the abode of respectable people. 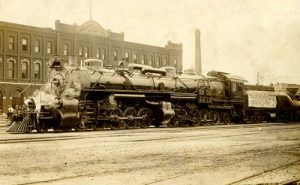 Wholesale Murder At Newton. Five Men Killed And Six Wounded. The Jury Ordered To Leave. The “Leading Man” Not Arrested

On Sunday morning last [August 20] a row occurred at Newton which resulted in the murder of two men and the wounding of nine others, three of whom have since died from wounds received in the affray. This affair occurred in one of the sinks of iniquity near the town called a “dance house.” A former resident of this town who was at Newton gives us the following particulars of the affair:

It seems that this murderous affair was the result of several less fatal shooting scrapes which have been happening at Newton for some weeks.

It must be borne in mind that the state of society in that town is now at its worst. The town is largely inhabited by prostitutes, gamblers and whiskey-sellers. Pistol shooting is the common amusement. All the frequenters of the saloons, gambling dens and houses of ill-fame are armed at all times, mostly with two pistols.

About two weeks ago a Captain French, from Texas, had George [or Arthur] Delany, alias Wm. [or Mike] McCluskie, a St. Louis hard case, arrested on a charge of garroting. He was tried before Esquire [C. S.] Bowman, and they failed to prove anything against him.

On the day of the election on railroad bonds, McCluskie and a man named Bailey, both of whom were on the special police, got into a difficulty about the matter of the arrest, and about a woman. Bailey’s got drunk. The difficulty commenced at one of the dance houses, just out of the town, and after coming to the village, Bailey’s was shot and killed by McCluskie. French and other Texans, among whom was one named Bill [or Hugh] Anderson, then swore they would put an end to McCluskie’s life, and break up his crowd. Several small difficulties occurred between the parties and their friends. At 1 o’clock last Sabbath morning, when all but one of the dance houses were closed, and most of their frequenters had left, the murderers proceeded to carry out their desperate threats. One of these disreputable places remained open. McCluskie was one of the loiterers. It proved to be his last hour on earth. Could he have known this, he would doubtless have preferred to spend it elsewhere.

On Sunday, two other white men and a negro were shot, but our informant did not learn their names. Neither of them were killed. A coroner’s jury was called on Sunday morning, and after an investigation, which lasted from 8 o’clock a. m. to 12:30 p. m., they found Bill Anderson guilty of manslaughter, they having proved that he fired the first shot. They adjourned, and soon after received notice that if they did not leave at once their bodies would be found Monday morning “ornamenting neighboring telegraph poles.” On Monday morning three of them came away on the early train, and the other three went to Wichita. Anderson came on the same train and went to Topeka to have his wounds attended to. Anderson and his men had such control over the crowd that the officers were afraid to arrest them.

The Texans were talking Sunday night of burning the town and running out the prostitutes and gamblers. Several of them left, and as we have heard of no such action on their part, we conclude they have abandoned the matter.

This was one of the bloodiest affrays that ever occurred in our State, and we hope that measures will be taken to prevent its recurrence.