Hot Springs National Park maintains Bathhouse Row, which preserves eight historic and architecturally significant bathhouse buildings and gardens along Central Avenue. Together, these bathhouses, nicknamed “The American Spa,” were built between the years of 1892 and 1923. These buildings, listed from south to north along the Row, include: 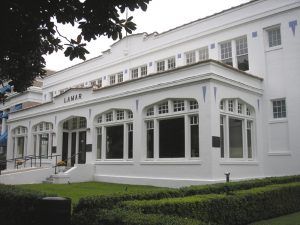 Lamar Bathhouse – This bathhouse opened on April 16, 1923, replacing a wooden Victorian structure named in honor of the former U. S. Supreme Court Justice Lucius Quintus Cincinnatus Lamar. The present structure cost $130,000 to build. The stone, brick, and stucco construction is moderately Spanish in flavor and coordinates well with the five other bathhouses with Spanish motifs. The Lamar was unique in that it offered a range of tub lengths for people of various heights. It also had a small coed gymnasium with another separate area for women. The most distinctive exterior component is the sun porch with its windows of three sections and a wide center bay. The lobby, featuring a long counter of Tennessee marble, was the largest of the eight bathhouses on the Row. Murals and stenciling were added to the lobby and stairways sometime in the 1920s. In the mid-1940s, the interior halls and stairs were embellished with marble, ornamental iron balustrades, and silver glass interspersed with red panel wainscots. The Lamar Bathhouse closed on November 30, 1985. Today, the structure houses offices for park employees, the park archives, museum collection storage spaces, a small research library, and the park store, Bathhouse Row Emporium. 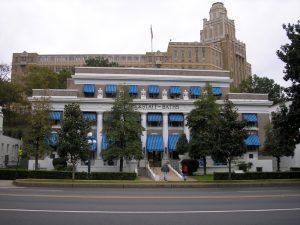 Buckstaff Bathhouse – Named for controlling shareholders George and Milo Buckstaff, this three-story building replaced the former Rammelsberg Bathhouse, a brick Victorian structure. The Neoclassical revival structure cost $125,000 to build and contains 27,000 square feet on three main floors. Because it has been in continuous operation since it opened on February 1, 1912, it is one of the best-preserved of all of the bathhouses However, it has undergone many changes over the years. Originally it had a large hydrotherapeutic department, which only it, the Fordyce, and the Imperial offered. Classical in design, with imposing Doric columns and urns gracing the front of the building, the Buckstaff features taupe brick with white stucco and wood trim. It epitomizes the Edwardian style of classically designed buildings popular during the first decade of the 20th century. Colorado marble is used throughout the interior, particularly in the bath halls. The floors are of white and colored hexagonal tile in varying patterns. All levels may be accessed by way of stairs or the building’s original elevator, with an ornate interior reminiscent of the Golden Age of Bathing. The current capacity of the building is 1,000 bathers per day. 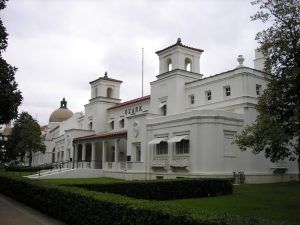 Ozark Bathhouse – Completed in the summer of 1922, this two-story Spanish Colonial Revival style building cost $93,000 to build. The bathhouse is set between low towers whose receding windows suggest the nascent Art Deco movement. The prominence of the towers was lessened during the 1942 renovation that brought the building’s wings forward in line with the front porch, which was enclosed at the same time. The plaster-cast window boxes are unique on Bathhouse Row. The cartouches on both sides of the front are of the scroll and shield type with the center symbol described as The Tree of Health or The Tree of Life. Like the Quapaw, the Ozark was more impressive in its exterior facade than in its interior appointments, with only 14,000 square feet and 27 tubs. It catered to a middle economic class of bathers unwilling to pay for frills. The Ozark closed in 1977. The painted wooden porch enclosure was removed in the late 1990s to return the building to its original appearance. Today, the Ozark houses the Hot Springs National Park Cultural Center, which features gallery spaces for displaying artwork from the park’s Artist-in-Residence Program and other temporary exhibitions. The building is operated by the park’s non-profit supporting organization, the Friends of Hot Springs National Park. Volunteers from the Friends group open the building for special occasions and on Friday, Saturday, and Sunday afternoons. 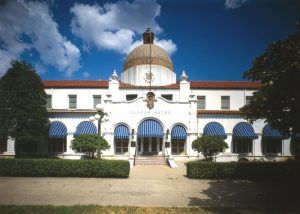 Quapaw Bathhouse – The longest building on Bathhouse Row, this bathhouse occupies the site of two previous bathhouses, the Horseshoe and Magnesia. The Spanish colonial revival style bathhouse opened in 1922. It was a moderately priced bathhouse that provided baths, vapors, showers, massages, and some electro-therapy. The one-story, u-shaped floor plan featured a central dome covered with colored tile and topped with a copper cupola. Vaulted stained glass extends the lengths of the bath halls. It first closed in 1968 and was reopened as Health Services, Inc. with only 20 tubs and services that were oriented towards hydrotherapy and physical therapy. It regained its original name a year before it was closed in 1984 following the discovery of major damage to plaster ceilings and skylights. It then sat vacant until 2007, when work began to restore the building and ready it for new use. It was the first building to be leased and was reopened to the public in 2008. It is open from Wednesday to Monday, where visitors can once again partake in spa services. 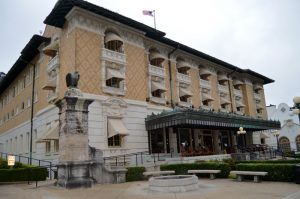 Fordyce Bathhouse – This three-story Spanish revival-style building opened on March 1, 1915. It cost over $212,000 to build, equip, and furnish and when complete, was encompassed approximately 28,000 square feet, making it the largest bathhouse on the Row. The first-floor lobby is filled with marble and stained glass transoms, a ceramic fountain at one end of the lobby, and a stained glass ceiling in the Men’s Bath Hall. The Dressing Rooms and Men’s Massage Rooms originally dominated the second floor. The third floor showcases the Music Room, with its patterned tile floor, stained glass ceiling, and Knabe grand piano. State Rooms speak of the luxury of relaxation, while the Gymnasium gives a glimpse of the forerunner of modern health clubs. The Fordyce was the only bathhouse to have a bowling alley. The Fordyce Spring was and still is on display in the basement. The Fordyce became the first bathhouse on the Row to go out of business when it suspended operations on June 30, 1962. Years later, it was extensively restored by 1989 and now serves as a museum and as the park’s visitor center. 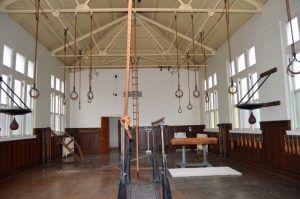 Maurice Bathhouse -This building replaced an existing Victorian-style building, the Independent Bathhouse, and opened for business on January 1, 1912. With a total floor space of 23,000 square feet, the three-story bathhouse had ample room for a complete range of services and amenities, including a gymnasium, staterooms, a roof garden, twin elevators, and in the 1930s a therapeutic pool, situated in the basement. It was the only bathhouse on the Row to have a pool. Its square plan was designed in an eclectic combination of Renaissance Revival and Mediterranean styles commonly used by architects in California. The Maurice closed in November 1974.

Hale Bathhouse – Named for early bathhouse owner John Hale, the present Hale Bathhouse is at least the fourth building to use this name. The present Hale Bathhouse is the oldest visible structure on Bathhouse Row. Most of the present structure was completed in 1892. The two and one-half story building was significantly enlarged and remodeled in 1914 in a classical revival style. The present building has 12,000 square feet on the two main floors. The lobby area was used as a sunroom where guests could relax in rocking chairs. In 1917, one of the hot springs was captured in a tiled enclosure in the basement, and this feature is still in place. In 1939, the building was redesigned again in the Mission Revival style, at which time, the brick was covered in stucco to look as it does today. The Hale closed on October 31, 1978. 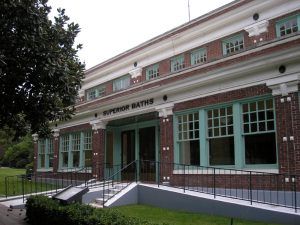 Superior Bathhouse – This two-story brick building was constructed  “an eclectic commercial style of classical revival origin” and opened on February 1, 1916. The style of construction was markedly different from that of the Victorian bathhouses that were its contemporaries. The 11,000 square foot building cost $68,000. Both the sun porch and the second story portion of this bathhouse are topped with brick parapets. The smallest bathhouse on the Row, the Superior also had the lowest rates and offered only the basic hydrotherapy, mercury, and massage services. It closed in November of 1983. Today, the Superior Bathhouse is home to the only brewery and distillery in a United States National Park, and the only brewery in the world to utilize thermal spring water to make their beer.

There is no entrance fee for the park.

Today, about 1,000,000 gallons of water continue to flow from the springs each day. The flow rate is not affected by fluctuations in the rainfall in the area. In fact, studies by National Park Service scientists have determined through radiocarbon dating that the water that reaches the surface in Hot Springs fell as rainfall 4,400 years ago. The water percolates very slowly down through the earth’s surface until it reaches superheated areas deep in the earth’s crust and then rushes rapidly to the surface to emerge from the 47 hot springs.

Hot Springs Creek flows from Whittington Avenue, then runs underground in a tunnel beneath Bathhouse Row on Central Avenue. It emerges from the tunnel south of Bathhouse Row then flows through the southern part of the city before emptying into Lake Hamilton, a reservoir on the Ouachita River. 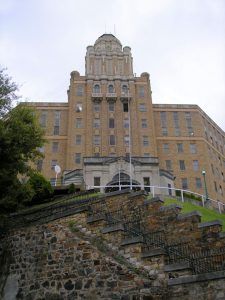 Aside from the Hot Springs National Park and Bathhouse Row, there are numerous attractions in the city and several events are held throughout the year. The city also features multiple historic districts and numerous buildings that are listed on the National Historic Register of Historic Places.