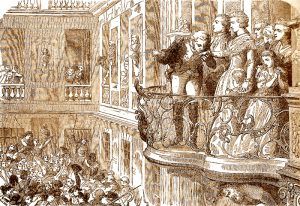 King Louis XVI and Marie Antoinette face the angry mob at the Palace in October 1769.

The friction within the country led to the French Revolution. On October 5, 1789, an angry mob of Parisian working men and women marched on the Palace of Versailles and forcibly moved the royal family to Paris because they felt the King would be more accountable to the people if he lived among them. Afterward, Louis ignored advice from advisors and refused to abdicate the throne. To avert the deepening crisis, Louis agreed to summon the “estates-general” (a form of parliament, but without real power) but refused to allow the state, church, and estates-general to meet simultaneously, causing the Third Estate to proclaim itself a national assembly and declaring that only it had the right to represent the nation.

In June 1791, the royal family attempted to escape, but they were soon brought back to Paris, by which time the King had lost all credibility as a monarch. In September 1792, the new National Convention abolished the monarchy and declared France a republic. Later, King Louis XVI was found guilty of treason and executed at the guillotine on January 21, 1793. His wife, Marie Antoinette was executed nine months later. 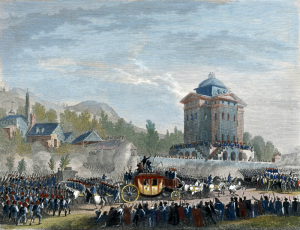 King Louis XIV and the royal family were ca[tured and returned to Paris after they tried to escape in 1791.

Both the king and his wife were known to have worn the Blue Diamond on several occasions. The queen’s Lady in Waiting, Marie Therese, Princess de Lamballe, who was a close confidant, was also known to have worn the diamond. After Louis and Antoinette’s imprisonments, Marie Therese refused to denounce King Louis XVI. As a result, she was dragged from the court and thrown to a violent mob. The crowd stripped, tortured, and decapitated the princess, before placing her head on a pike. They then paraded their prize outside the prison window of former Queen Marie Antoinette.

In the meantime, the jewels of the French Royal Treasury had been turned over to the new government. During a week-long looting of the crown jewels in September 1792, the French Blue Diamond was stolen. While many jewels were later recovered, including other pieces of the Order of the Golden Fleece, the French Blue was not among them and it disappeared from history.

During the missing years, a Dutch diamond cutter named Wilhelm Fals somehow obtained the diamond recut the precious stone to hide the jewel’s identity. On completion, the 69 carat stone was reduced to the 45 carat Blue Hope Diamond we see today. During the time it was in Fals’ possession, his son, Hendrik stole the gem ruining his father who was said to have died in grief. Hendrick Falls then gave the diamond to a man named Francis Beaulieu in payment of a debt. Beaulieu then traveled from Marseille, France to London, England to sell the diamond to jewel dealer Daniel Eliason. However, when the jeweler went to pay Beaulieu he found him dead in a lodging house, having succumbed to fever. Years later, Hendrik Fals killed himself in 1830. 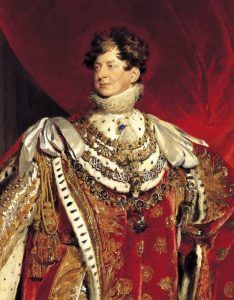 English King George IV wearing what appears to be a large blue diamond.

In the meantime, the public was unaware of the whereabouts of the beautiful blue diamond until a man named John Francillion documented that a large blue diamond was in London, England in 1812. He described that the stone, weighing over 45 carats, was in the possession of a London diamond merchant Daniel Eliason and the gem was for sale. Because of its size and unusual color, the stone suggested that it was recut from the French Blue that had been stolen ten years previously. Shortly afterward, the jeweler, Daniel Eliason committed suicide.

In 1822, a portrait of King George IV of England was painted in which, the King was wearing the insignia of the Royal Order of the Golden Fleece set with a large blue stone bearing a striking resemblance to the French Blue diamond. When King George died in 1830, his estate encumbered by great debt and it is thought that the diamond, along with other jewelry and personal effects were sold to cover the many debts he had left behind. 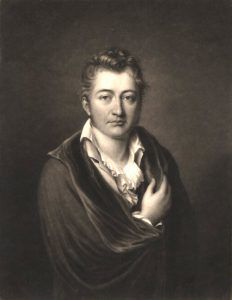 Henry Phillip Hope died in 1939, the same year he acquired the Blue Diamond.

In 1839, a large blue diamond appeared in the gem catalog of Henry Philip Hope, a London banker. At this time, the jewel became known as the “Hope Diamond.” After Hope’s death in 1839 and litigation within the family, the stone was passed on to his nephew, Henry Thomas Hope, in 1841. Later the precious stone would pass to Henry Thomas Hope’s grandson, Lord Francis Hope, who lived beyond his means.

In 1894, Lord Francis Hope met American concert hall singer May Yohé and the two married the same year. By the time they married, Hope was nearly bankrupt, but the pair ignored financial problems and lived lavishly, gambled, and traveled often, squandering everything he had left including jewelry, heirlooms, pictures, art, and land. He then began to borrow money, sending him into even further decline. In 1900 they made a tour of the world, and on their way home met Captain Putnam Bradlee Strong, a handsome and popular man in the United States Army. Yohe fell head over heels in love with the dashing captain and refused to return to England with Lord Francis.

In 1901 Lord Francis Hope sold the Blue Diamond to help pay off his debts and the next year, he claimed bankruptcy, lost his foot in a hunting accident, and divorced May Yohé. Hope remarried in 1904, had three children, inherited dukedom from his brother in 1928 and died a poor man in 1941 at the age of 75. 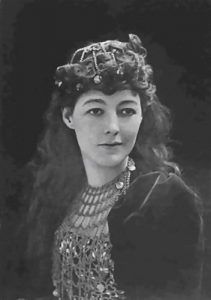 During their marriage, Yohe was known to have worn the diamond at least once, but she later claimed she had worn it at several social gatherings, although Lord Francis claimed otherwise. After she and Francis Hope divorced, she married the handsome Army captain but was divorced just a few years later. Afterward, she maintained a stage career off and on and married several more times. As the years went by, she was reduced to working as a housekeeper and a clerk. She died in poverty in 1938 at the age of 72.

By the 1900s, stories of the diamond’s curse had been flourishing for years, with some saying that the original form of the Hope Diamond was stolen from the eye of a sculpted statue of the goddess Sita, the wife of Rama, a major deity of Hinduism. Though many believed the precious stone was really was cursed due to the many tragedies of its owners, others felt strongly that these tales were perpetuated to add mystique to the stone,  increase its sales appeal, and increase newspaper sales.

In 1901, the stone was sold by Lord Francis Hope to Adolph Weil, a London jewel merchant, who in turn, sold it to diamond dealer Simon Frankel, in New York for $148,000. In some versions of its history, Frankel kept the diamond until he sold it to Salomon Habib, a wealthy Turkish diamond collector, in 1908. However, other versions say that between 1901 and 1908, the stone was bought and sold several times.