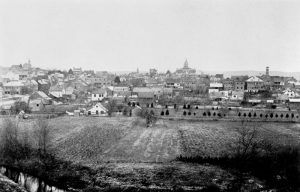 Hermann fell on hard times during World War I, especially as the city suffered from anti-German sentiment provoked by the war. Making matters worse was the enactment of Prohibition in 1919, which sent the city reeling into the Great Depression a full decade before the rest of the country. Fortunately, economic diversity and community strength allowed the town to survive these challenges and remain a prosperous community as Missouri entered the 1920s. A side benefit also occurred as there was simply no money to modernize old buildings, which is one of the reasons so many continue to stand today.

In the 1920s Missouri was just beginning to start building modern highways. In 1921, the State of Missouri passed the Centennial Road Law, which created a highway commission to coordinate the construction of a statewide road system linking Missouri’s county seats. A key component of Missouri’s emerging statewide highway system was the construction of bridges across major rivers. Government leaders in Hermann soon started to lobby for a bridge across the Missouri River that would connect Hermann to U.S. Highway 40 north of the river and U.S. Highway 50 south of the river. Both highways were cross-state thoroughfares joining St. Louis to Kansas City, and Highway 40 was part of a national road that reached back to the east coast. By linking the city to these two critical highways Hermann could draw larger numbers of tourists to its annual festivals and encourage the further growth of local industries and agribusinesses. 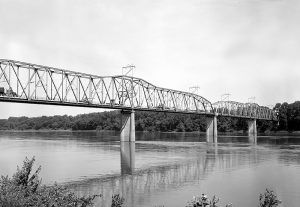 1928 bridge over the Missouri River in Hermann, Missouri by the Historic American Building Survey.

The business leaders were finally successful and the bridge began to be built by the National Toll Bridge Company in the fall of 1928. After a few delays, the bridge finally opened on the morning on August 29, 1930. Initial tolls ranged from 60¢ to $1.25. The new bridge was seen by many as a boon that would improve the local economy and transform Hermann into a commercial and tourist center. However, with the oncoming Great Depression, the bridge did not create dramatic economic or population growth.

Further, the bridge didn’t turn a profit for the National Toll Bridge Company and it was sold to the Missouri State Highway Commission in 1932. The cantilevered truss bridge continued to carry traffic for decades before it closed in July 2007 and was replaced by a new bridge. The 401-foot long bridge was demolished in 2008. 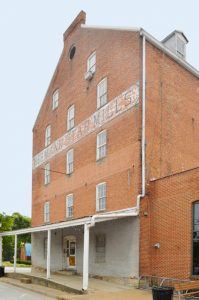 After Prohibition ended in 1933, some small operators in the area began producing wine again but significant production wouldn’t be renewed for several decades.

In 1952, Hermann’s Maifest tradition grew into a citywide celebration when the Brush & Palette Club advertised the first public Maifest to raise funds for the restoration of the Rotunda Building, an unusual eight-sided structure in the city park that had fallen into disrepair. The outcome was almost too successful. A crowd of more than 40,000 descended on an unsuspecting Hermann. Traffic was a nightmare, food was sold out for a 50-mile radius, and restroom facilities were better not mentioned. The next year the women of Hermann cooked for a week to prepare for the crowds. The event was a success, and a new tradition was born.

In the 1960s, people began to rebuild the wine industry in the Hermann area, which soon became one of the main tourist attractions. Today, the city of about 2,400 people is the commercial center of the Hermann American Viticultural Area, with the seven wineries in and around Hermann accounting for more than a third of the state’s total wine production. This includes Stone Hill Winery, the largest winemaking business in the state and Hermannhof Winery are located within the city. Two miles south of Hermann off Missouri Highway 100 West is Adam Puchta Winery, the oldest continuously family-owned winery in the nation, under direct family ownership since 1855. 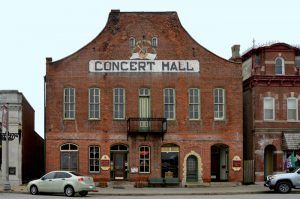 Hermann’s Old-World charm attracts visitors in search of the quiet pleasures of an earlier era. There are numerous historic buildings in Hermann and an area of five blocks from the Missouri River to Fifth Street is designated as a national historic district with several buildings listed on the National Register of Historic Places. The district encompasses 360 contributing buildings that were established between 1838 and 1910.

The earliest of these buildings can be toured at the Deutschheim State Historic Site located at 109 West Second Street. This site includes the 1848 Potnmer-Gentner House and the 1845 Strehly House. Period furniture, tools, and gardens give visitors a glimpse into life in early Hermann.

Other interesting buildings include the 1906 Hermann City Hall, the 1877 Concert Hall, the 1871 German School, and the 1896 Gasconade County Courthouse, and many others.

Hermann’s Maifest is held during the third weekend in May and an Oktoberfest is held on the first four weekends in October. 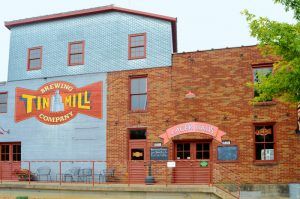