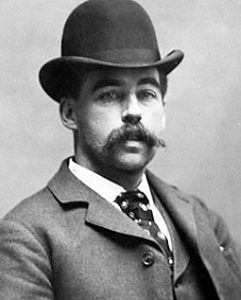 “I was born with the devil in me. I could not help the fact that I was a murderer, no more than the poet can help the inspiration to sing — I was born with the ‘Evil One’ standing as my sponsor beside the bed where I was ushered into the world, and he has been with me since.”

Said to have killed as many as 200 people, he would eventually confess to 28 murders, but only nine could be confirmed. If his murderous activities weren’t enough, he was also a con artist, a bigamist, and the subject of more than 50 lawsuits in Chicago alone.

Mudgett was born in Gilmanton, New Hampshire, on May 16, 1861, to Levi Horton Mudgett and Theodate Page Price, both of whom were descended from the early English settlers. One of five children, his father was a farmer who sometimes worked as a trader and house painter. His parents were devout church-goers. Young Herman was said to have shown a high intelligence at an early age and excelled at school. However, he was bullied by his peers and there were signs of what was to come – practicing surgery on animals and cruelty towards smaller children. Some accounts indicate that he may have been responsible for the death of a friend. 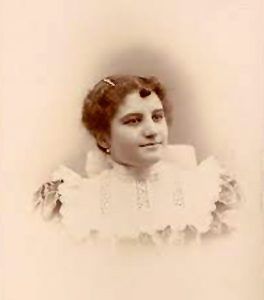 At the age of 16, Holmes graduated from high school and took a teaching job in Gilmanton and later in nearby Alton. On July 4, 1878, he married Clara Lovering, the daughter of a well-to-do family, who would help to pay for his education. The couple would have a son in 1880.

In 1879, at the age of 18, he enrolled in the University of Vermont in Burlington but left after only one year. Two years later, in 1882, he entered the University of Michigan’s Department of Medicine and Surgery and graduated in June 1884. During his schooling, he worked in the anatomy lab under the chief anatomy instructor. At some point, he also apprenticed under Dr. Nahum Wight, a noted advocate of human dissection in New Hampshire. It was there that he discovered a passion for dissecting cadavers.

It was during this time that Mudgett began a life of various frauds and scams. As a medical student, he stole corpses, burned or disfigured them, and then planted the bodies making it look as if they had been killed in an accident. In the meantime, he took out insurance policies on them and collected the money once the bodies were discovered. He was also known to have profited by stealing and selling cadavers and skeletons. Known to have developed a “passion” for dissecting corpses, he was thought to have used the bodies for experiments, as well. 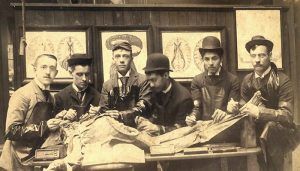 Medical Students With a Cadaver in the 19th Century

At the same time, housemates described Mudgett as treating Clara violently, and in 1884, before his graduation, she and their son moved back to New Hampshire and she never saw him again.

He then moved to Mooers Forks, New York, where a rumor spread that Mudgett had been seen with a little boy who later disappeared. Herman claimed the boy went back to his home in Massachusetts. No investigation took place and Mudgett quickly left town.

He was next living in Philadelphia, Pennsylvania where he got a job as a keeper at Norristown State Hospital, but he quit after a few days. He then went to work in a drugstore in Philadelphia, but while he was working there, a boy died after taking medicine that was purchased at the store. Holmes denied any involvement in the child’s death and immediately left the city. 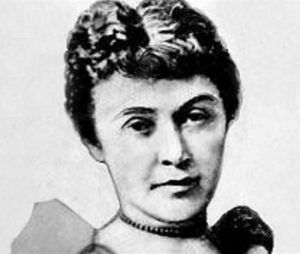 In 1886, though he wasn’t divorced from Clara, Mudgett married a woman named Myrta Belknap in Minneapolis, Minnesota and the couple would eventually have a daughter. He filed for divorce from Clara a few weeks after marrying Myrta, alleging infidelity on her part, but the claims could not be proven and the suit went nowhere. Surviving paperwork indicated that she probably was never even informed of the suit and the divorce was never finalized.

Also in 1886, Mudgett changed his name to Henry Howard Holmes, probably to hide from the insurance scams that would later be discovered. He and his wife Myrta then moved to Illinois where they lived in Wilmette. However, Holmes spent most of his time in Chicago.

There, he went to work at Holton’s drugstore at the southwest corner of South Wallace Avenue and West 63rd Street in Englewood. Dr. Edward Holton was a fellow Michigan alumnus, only a few years older than Holmes. Holmes proved himself to be a hardworking employee and eventually bought the store. 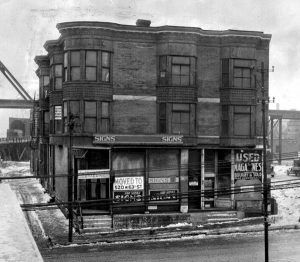 He then purchased an empty lot across from the drugstore, where construction began in 1887 for a two-story mixed-use building, with apartments on the second floor and retail spaces, including a new drugstore, on the first. When Holmes declined to pay the contractors, they sued in 1888. However, construction continued, during which time, Holmes hired and fired several construction crews, for two reasons – 1) so that no one would have a clear idea of what he was doing and 2) so he could claim bad workmanship and refuse to pay for services. Later, the police would determine that he never paid a cent for any of the materials that went into the building.

The neighborhood folks soon dubbed the building the “Castle.”

After construction was complete in 1891, Holmes placed ads in newspapers offering jobs for young women and advertised the Castle as a place of lodging. He also placed ads presenting himself as a wealthy man looking for a wife. All of Holmes’ employees, some hotel guests, fiances, and wives were required to have life insurance policies, with Holmes or one of his aliases, being the beneficiary. People started to disappear.

By this time, Holmes was not being faithful to his second “wife” Myrta and began to have an affair with a woman named Julia Smythe Conner. She was the wife of Alex Conner, who had moved into Holmes’ building and began working a bookkeeper and at his pharmacy’s jewelry counter. After Conner found out about Julia’s affair with Holmes, he quit his job and moved away, leaving Julia and her daughter Pearl behind. Julia and Pearl remained at the hotel and she continued her relationship with Holmes. Around Christmas of 1891, Julia and Pearl disappeared. They were most likely his first known murders. Holmes would later claim that Julia had died during an abortion, though what truly happened to the two was never confirmed.

In 1892, Holmes added a third floor his building, telling investors and suppliers that he intended to use it as a hotel during the upcoming World’s Columbian Exposition, though the hotel portion was never completed. Furniture suppliers found that Holmes was hiding their materials, for which he had never paid, in hidden rooms and passages throughout the building. Their search made the news, and investors for the planned hotel pulled out of the deal.

In May 1892, another girl named Emeline Cigrande began working in the building and she disappeared in December. Another neighborhood girl by the name of Edna Van Tassel, also “vanished” at about the same time and was thought to have been another potential victim. 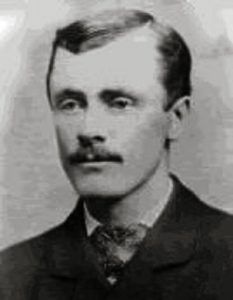 n the meantime, Holmes made the acquaintance of Benjamin Pitezel when he placed an ad in search of carpenters. Pitezel was also a petty criminal and alcoholic. Despite his issues, the two became close friends and Pitezel would quickly become Holme’s right-hand man for several criminal schemes.

In early 1893, a one-time actress named Minnie Williams moved to Chicago and Holmes offered her a job at the hotel as his personal secretary. Williams owned some property in Fort Worth, Texas that Holmes convinced her to sign over to him. Holmes later transferred the deed to Pitezel. In May of 1893, Holmes and Williams, presenting themselves as man and wife, rented an apartment in Chicago’s Lincoln Park. Minnie’s sister, Nannie, came to visit, and in July, she wrote to her aunt that she planned to accompany “Brother Harry” to Europe. Neither Minnie nor Nannie were seen alive after July 5, 1893.

1 thought on “H.H. Holmes and the Murder Castle of Chicago”