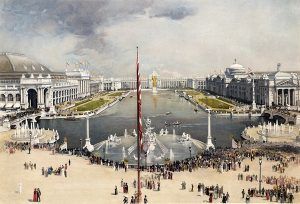 In 1893, Chicago was given the honor of hosting the World’s Fair, a cultural and social event to celebrate the 400th anniversary of Columbus’ discovery of America. The event was scheduled from May to October and attracted thousands of people from all over the world. During this time, Holmes opened up his home as a hotel for visitors. Some would never be seen again.

To best take advantage of Chicago’s influx of tourists, Holmes advertised in the newspaper. In these ads, he called the castle, which was only a few miles away from the fairgrounds, the “World’s Fair Hotel.” Holmes not only ensnared soon-to-be victims by newspaper ads, but he also attended the fair in the company of the Pitezel children. There, the impeccably dressed doctor would turn on the charm, luring wealthy women to his castle with the promise of a good night’s rest. Usually from out of town and unnoticed in the huge fair crowds, they were impossible to trace once they vanished into the castle’s dark recesses. The list of the “missing” when the Fair closed was a long one and for most, foul play was suspected. How many of them fell prey to Holmes is a mystery but no fewer than 50 people who were reported to the police as missing were traced to the castle, where their trails ended.

On August 13, 1893, the third floor of Holmes’ building caught fire. Luckily, only a few people were in the building – all employees and long-term residents who were able to get out. Holmes had taken out insurance policies on the building with at least four companies, all of which promptly sued rather than pay.

With insurance companies pressing to prosecute Holmes for arson, Holmes left Chicago in July 1894. He reappeared in Fort Worth, looking to build on the property that Minnie Williams had transferred. That same month; however, he was arrested and briefly incarcerated for the first time, on the charge of selling mortgaged goods in St. Louis, Missouri. 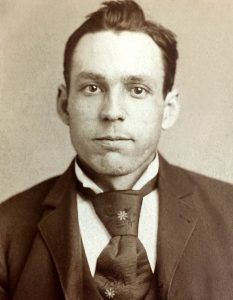 While he was in jail he struck up a conversation with a convicted outlaw named Marion Hedgepeth, who was serving a 25-year sentence. Holmes had concocted a plan to swindle an insurance company out of $10,000 by taking out a policy on himself and then faking his death. Holmes promised Hedgepeth a $500 commission in exchange for the name of a lawyer who could be trusted. Given the name of Jeptha Howe, Holmes began planning his own death after he was released on bail. However, the plan failed when the insurance company became suspicious and refused to pay. Holmes did not press the claim; instead, he concocted a similar plan with his friend, Benjamin Pitezel.

Pitezel agreed to fake his own death so that his wife could collect on a $10,000 life insurance policy, which was to be split with Holmes and attorney, Jeptha Howe. The scheme, which was to take place in Philadelphia, called for Pitezel to set himself up as an inventor under the name B.F. Perry, and then be killed and disfigured in a lab explosion. Holmes was to find an appropriate cadaver to play the role of Pitezel. 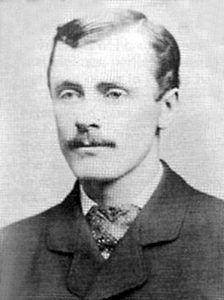 Instead, Holmes killed Pitezel by knocking him unconscious with chloroform and setting his body on fire. Holmes proceeded to collect the insurance payout on the basis of the genuine Pitezel corpse. He then went on to manipulate Pitezel’s unsuspecting wife into allowing three of her five children to be in his custody. The eldest daughter and the baby remained with Mrs. Pitezel while Holmes and the three Pitezel children traveled throughout the northern United States and into Canada. Simultaneously, he escorted Mrs. Pitezel along a parallel route, all the while using various aliases and lying to Mrs. Pitezel concerning her husband’s death, claiming that her husband was in London.

Holmes would later confess to murdering two of the children by forcing them into a large trunk, drilling a hole in the trunk, and attaching a gas line to asphyxiate the girls. Holmes buried their nude bodies in the cellar of his rental house in Toronto. Frank Geyer, a Philadelphia detective tracking Holmes, found the decomposed bodies of the two Pitezel girls in the Toronto basement.

Geyer then followed Holmes to Indianapolis, where Holmes had rented a cottage. Holmes was reported to have visited a local pharmacy to purchase the drugs which he used to kill the third Pitezel child and a repair shop to sharpen the knives he used to chop up the body before he burned it. The boy’s teeth and bits of bone were discovered in the home’s chimney.

On January 17, 1894, Holmes married for a third time to a woman named Georgiana Yoke on, in Denver, Colorado. He was still legally married to both Clara and Myrta.

In the meantime, Marion Hedgepath, who was angry that he did not receive any money in the “faked death” scam, told police about the fraud that Holmes had planned. Afterward, the authorities doubled their efforts to find the elusive killer.

Holmes’ murder spree finally ended when he was arrested in Boston, Massachusetts on November 17, 1894, after being tracked there from Philadelphia by the Pinkertons. He was held on an outstanding warrant for horse theft in Texas, as the authorities had become more suspicious at this point and Holmes appeared poised to flee the country in the company of his unsuspecting third wife.

During his time in custody, Holmes initially claimed to be nothing but an insurance fraudster, admitting to using cadavers to defraud life insurance companies several times in college. But, over time, his stories changed, once admitting to killing 28 people. Other estimates range from 20 to as many as 200 victims. While he was incarcerated, Holmes was paid $7,500 (worth about $216,000 today) by the Hearst newspapers in exchange for his confession, much of which was found to be lies. Holmes gave various contradictory accounts of his life, initially claiming innocence and later that he was possessed by Satan. His many lies made it difficult for investigators to determine the truth. 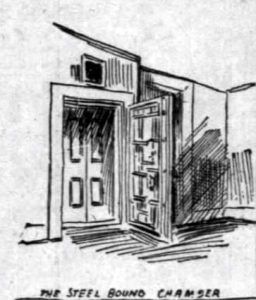 With Holmes behind bars, Chicago police began to investigate Holmes’ building. The ground floor of the building was divided into ordinary retail spaces, including a jewelry store, pharmacy, blacksmith shop, barber and restaurant. The third floor consisted of apartments, offices and Holmes’ living quarters. But on the second floor and basement, they discovered an elaborate house of horrors.

The second floor was a maze of some 35 small windowless rooms, stairs, and doors that led nowhere, false partitions, trap doors, secret passageways and a staircase that opened out over a steep drop to the alley behind the house. There were also trapdoors and dumbwaiters that enabled him to move the bodies down to the basement. Some rooms were soundproof and had peepholes enabling Holmes to monitor their interiors. Others were connected to a gas line that where victims could be asphyxiated.

The basement held a crematorium, a blood-spattered dissection table, vats of acid, surgical implements, various jars of poison, pits of quicklime, and torture devices attached to the walls. Holmes is thought to have stripped many of the bodies down to their skeletons in order to sell them for medical study.

Not only did they find the equipment to produce evil, they also found large quantities of human bones, tufts of hair, bloodstained linen and pieces of clothing that appeared to have been hastily concealed. Portions of bodies were so badly dismembered and decomposed that it was hard for them to determine exactly how many bodies there really were. 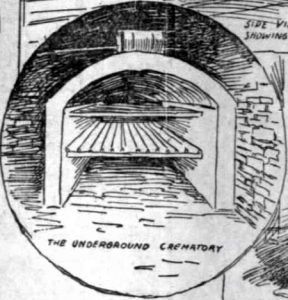 The building soon became known as the “Murder Castle.”

After a trial, in which he acted as his own attorney, Holmes was sentenced to death for the murder of Benjamin Pitezel in 1895. Holmes appealed his case but lost. Though Canada and Illinois both tried to extradite Holmes from Pennsylvania, he was executed. He met his end on May 7, 1896, when he was hanged for the Pitezel murder in Philadelphia, Pennsylvania. Until the moment of his death, Holmes remained calm and amiable, showing very few signs of fear, anxiety or depression. During the hanging, Holmes’ neck did not snap; he instead was strangled to death slowly, twitching for over 15 minutes before being pronounced dead 20 minutes after the trap had been sprung.

Holmes asked for his coffin to be contained in cement and buried 10 feet deep because he was concerned grave robbers would steal his body and use it for dissection.

Holmes’s life as one of America’s first serial killers has been the subject of many books, documentaries, and a feature film.

The Castle itself was mysteriously gutted by fire in August 1895. According to a newspaper clipping from the New York Times, two men were seen entering the back of the building between 8 and 9 p.m. About a half an hour later, they were seen exiting the building and rapidly running away. Following several explosions, the Castle went up in flames. Afterward, investigators found a half-empty gas can underneath the back steps of the building. The building survived the fire and remained in use until it was torn down in 1938. The site is currently occupied by the Englewood branch of the United States Postal Service.

In 2017, amid allegations that Holmes had in fact escaped execution, Holmes’ body was exhumed for testing. Due to his coffin being contained in cement, his body was found not to have decomposed normally. His clothes were almost perfectly preserved and his mustache was found to be intact. The body was positively identified as being that of Holmes with his teeth. Holmes was then reburied. 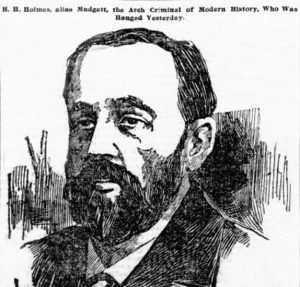 Newspaper clipping the day after H.H. Holmes was hanged

1 thought on “H.H. Holmes and the Murder Castle of Chicago”