In southern Park County Colorado, about 33 miles north of Canon City, just off Highway 9, Guffey is a ghost town with a twist of quirkiness, making for a fun visit. 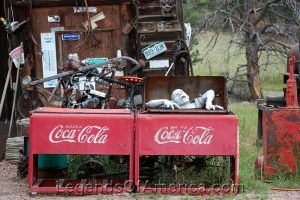 The old Garage in Guffey no longer does repairs, but has become a collection of oddities. Photo by Dave Alexander.

At an elevation of 8,700, this area was explored by John C. Fremont on his return from California in 1844, and some settlers are said to have arrived here in the 1870s, though the primary population of this region was the Ute Indian Tribe.

The town started in 1890 with a whole lot of promise. Prospectors, looking for the next big gold strike, like the one in Cripple Creek, established the mining camp as Idaville, but soon changed its name to Freshwater.

When the town was incorporated in 1895, it was already booming as a mining, lumbering and ranching community. It was the center of activity for the Freshwater Mining District, which in addition to gold, produced copper, lead and other minerals.

Gold was the primary allure though, and the focus that brought in prospectors. On August 31, 1896, the Colorado Daily Chieftain reported: 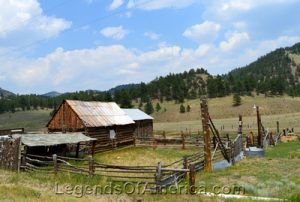 An old homestead in Guffey, Colorado. Photo by Kathy Weiser-Alexander.

“All of the arrangements have been completed, and negotiations closed for the construction of a cyanide mill on Currant creek of a capacity of 60 -tons per day. The mill is now assured beyond any doubt, and ground will be broken for its construction within a fortnight. The capitalists behind the enterprise are Roadhaven and Vanderpool, of St. Louis, who have visited the camp several times, investigating our mines and ores, with William Goodman of Cripple Creek, who has been largely instrumental in consummating this enterprise. They claim to be able to treat $7 ore at a profit, which it is claimed will make of Freshwater the biggest camp in the world. The townspeople have guaranteed the company 50 tons of ore per day. This step locates Freshwater beyond the boundary of a prospecting camp, and places it in the list of producers.”

In the late 1890s, the name of the town was changed again due to another Freshwater in California. This time they named it after James McClurg Guffey, an oilman and capitalist. Guffey was known throughout the region for its dances, which included lots of fiddlers and other musicians. It reached its peak during this period, with over 500 residents and 40 businesses. Most brought here with the promise of Gold.

There were many mines and prospects around Guffey, but in the end, the total production recorded was minor. Nearby cattle ranches and lumber operations supported Guffey while mining wasn’t profitable. In the Park County Bulletin, dated January 17, 1902, we find:

“With this issue, the GUFFEY PROSPECTOR will cease publication. This is due in part to tho fact that the camp has another paper, and to the additional fact that the Freshwater districts have failed, so far, to develop sufficiently to support a newspaper. The PROSPECTOR has for some time been published from the BULLETIN office, and while working faithfully for the camp, it has never been a paying investment. Those in the Freshwater districts who wish to settle their accounts with the paper, can do so with Captain Sylvis, at the Guffey post office. To those who wish it, the BULLETIN will be continued to their address, and we will try to make it meet their requirements as always up with the news of Park county. We still have faith in the Freshwater districts, and believe that, when sufficient depth has been obtained, there will be pay mines made and profitable mining done.”

It wouldn’t be long until Guffey began losing its population. Today the community has only around 49 residents, and relies heavily on Tourism. Several original structures remain, and are even occupied. Others have been kept up, though empty. The town has a charter school, restaurant, small museum and more. Guffey continues to be the center of activity for nearby ranches, some of which are Park County Historic Landmarks, including the Aspen Creek/Bener/Moore Ranch, Campbell Ranch, and Thirty-One-Mile Ranch. 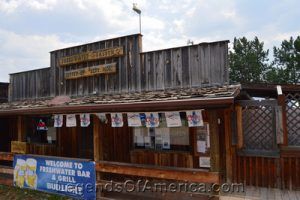 The Freshwater Saloon in Guffey still servin’ up the suds. Photo by Kathy Weiser-Alexander. 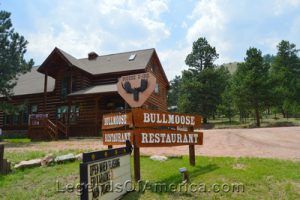 The Bullmoose may not be open all the time but still serves up some fine eats. Photo by Kathy Weiser-Alexander.

Guffey sits in a very scenic area, created by three ancient volcanoes. The Guffey volcanic center is part of the Thirty-nine Mile Volcanic area, the largest remnant of the Central Colorado volcanic field. Two mineral springs a mile south of Guffey featured spring waters bubbling up from large mounds over 20 feet high and 50 feet across. 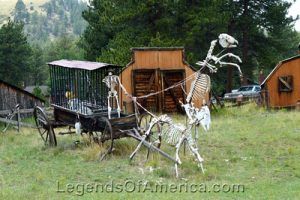 The Skeleton Crew at the Guffey Jail. Photo by Kathy Weiser-Alexander, 2018.

After visiting this quirky, somewhat ghost town in Park County Colorado, it was no surprise to find out that they have a habit of electing animals as Mayor. In fact, the two main political parties are the Democats and the Repuplicans. The current Mayor, Monster the Cat was elected in 1998. Lydia Reynolds of Guffey’s 31 Mile Ranch and Bill Sioux of Guffey Garage left us a comment below confirming Monster was still alive and well in November 2019.