Carole Lombard – Carole Lombard was one of Hollywood’s top comedy actresses in the 1930s. She married Clark Gable in 1939 and the pair were said to have one of Hollywood’s ideal marriages. However, their love was cut short when Lombard was killed in a plane crash just three years later. Her spirit has been seen near the suite she shared with Clark Gable at the Hollywood Roosevelt Hotel. Both her and beloved husband, Gable, allegedly also haunt the Oatman Hotel in Oatman, Arizona, where they spent their honeymoon.

Marilyn Monroe – This glamorous film star of the 1950s slipped into a coma caused by an overdose of sleeping pills on August 4, 1962. She never woke up and was pronounced dead the next day. Today, her ghostly spirit is known to haunt the Hollywood Roosevelt Hotel. At the height of her popularity, she often stayed at the hotel where her image is seen in a full-length mirror that once hung in her poolside suite. It now hangs in the lobby where people see her image reflected in the glass. Her ghost has also been spotted hovering near her tomb at Westwood Memorial Cemetery in Los Angeles, California. Lastly, she is also said to haunt the house where she took the fatal dose of sleeping pills. According to psychics, Marilyn has relayed to them that her death was not a suicide, but an accident.

Ozzie Nelson – Bandleader, Ozzie married Harriet in 1935. In 1944, they started The Adventures of Ozzie and Harriet on radio which later switched to television in a run that would stretch to twenty-two years: eight on radio and fourteen on television. In 1941 the couple purchased a house where they lived for the next 40 years. When their popular sitcom was aired on television, beginning in 1852, the exterior of the television house was modeled on the real-life Nelson home. Subsequent owners believe that Ozzie’s ghost continues to remain in his beloved home, as unseen hands open and close doors, turn on faucets, and lights turn on and off by themselves in otherwise empty rooms. One owner even tells a story that “someone” got fresh with her during the night when her blankets were pulled back and she felt someone kissing her neck and breasts. 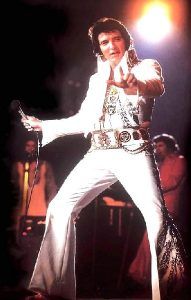 Elvis Presley – Just as flamboyant in death as he was in life, the legendary singer continues to haunt his beloved home in Memphis. A white-sequined Elvis has been seen by stagehands at the Las Vegas Hilton where he often performed in the early 1970s. He has also been “seen” in a rambling old building just off Nashville’s Music Row. At one time, the building housed the recording studios of RCA in the 1950s and it was here that Elvis recorded his breakthrough 1956 hit single, Heartbreak Hotel. Though RCA is no longer there, the building continues to house a TV production studio that produces music-related programs. According to people that have worked there, every time Elvis’ names is mentioned something strange happens, such as ladders falling down, lights blowing out, and unexplained noises coming through the sound system. A white-sequined Elvis has reportedly been spotted by stagehands at this hotel where he performed in the early 1970s.

George Reeves – The star to the 1950’s television series, Superman, committed suicide in 1959 by shooting himself in the head. Though due to be married in just three days time, Reeves was despondent at his stalled career, when he had become so type-casted as Superman he couldn’t find other parts. Today, he allegedly still appears in his old bedroom, fully outfitted in his Superman costume before slowly fading away.

Betsy Ross – Credited with sewing the first American flag, Ross continues to lurk within her old home in Philadelphia, Pennsylvania. Ross, who is buried on the property, has often been seen crying while sitting at the foot of the bed in her former home.

Bugsy Siegel – One of the most colorful of Las Vegas’ underworld figures, Bugsy is often attributed to envisioning the sparkling city that Las Vegas is today. While there were a number of small gambling spots in Las Vegas, there was nothing like the Flamingo Hilton that Siegel opened in 1946. But, the Flamingo cost the mob millions to build and took much longer than they had anticipated. Sure that Bugsy was skimming from them, they had him killed in his girlfriend’s mansion in Beverly Hills. On June 20, 1947, he was sitting in the living room when two shots came through the front window, hitting him in the head. Today, Siegel is known to haunt the mansion. Witnesses have reported seeing the apparition of a man running and ducking across the living room of the house, only to disappear as suddenly as he came. He also lurks about the Flamingo hotel, appearing nattily dressed in a smoking jacket with a wide smile on his handsome face. Most often, he is seen in the presidential suite at the hotel which was his home for many years. He has also been spied in and around the rose garden or in the wedding chapel area.

Dylan Thomas – Dylan Thomas, a Welsh poet, and writer, drank 18 shots of scotch in the White Horse Tavern in New York City in 1953. Afterward, as you can imagine, he collapsed and died. Today, his spirit is said to return to the scene time after time, where he rotates his favorite corner table like he used to do when he was alive. The White Horse Tavern is located at 567 Hudson Street at West 11th Street in New York City.

Thelma Todd – A popular young star in the 1930s, Todd was featured in a number of hit comedies with The Marx Brothers, Buster Keaton, and Laurel and Hardy. During the height of her stardom, she opened a restaurant called Thelma Todd’s Sidewalk Café and lived in a luxurious apartment above the restaurant. In 1935 her success came to an untimely end when she was found in her car at the garage of the Sidewalk Café. Killed by carbon monoxide poisoning, her death was ruled an accidental suicide. Today, the building that once housed the café near the ocean on Roosevelt Highway is owned by Paulist Productions. Employees have reported Todd’s ghostly image descending the stairs.

Mark Twain – Popular American humorist, novelist, writer and lecturer, Twain once lived in downtown New York at 14 West 10th Street (near Fifth Avenue) between the years of 1900 and 1901. Today, his spirit allegedly haunts the building’s stairwell.

Clifton Webb – A popular star in the 1940s and ’50s, Webb is best known for his portrayal of Mr. Belvedere in a series of films. He died of heart disease at the age of 76. During his life, he never married and shared his home with his mother until she died, who he said visited him nightly. He was known to tell his friends at this time, that he too would haunt the house after his death. True to his word, his ghost has been seen at parties, standing in the library uttering his favorite phrase “well, well, well…” A lifelong chain-smoker, non-smokers have awakened in the house covered with ashes. He also is said to not like women sitting in his old armchair, which begins to bounce and make noise when a female sits in it. Webb has also been spied at the Abbey of the Psalms Mausoleum in the Hollywood Forever Memorial Park, where his body is interred. 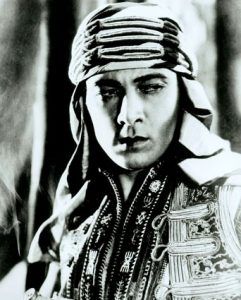 Rudolph Valentino – Rudolph Valentino was one of the greatest romantic idols of Hollywood’s silent movie era. His career, however, was cut short when he died at the age of 31 from complications of an ulcer. Immediately after his death, the “Latin Lover” began to haunt his home grounds of Hollywood and to this day, is said to be its most active ghost. Valentino has been spotted in a number of places, most often in his former mansion – the Falcon’s Lair. Here, his image has been seen in the hallways, in his old bedroom, peering from a window on the second floor, and in the stables. One stable worker, after having seen Valentino petting his favorite horse, promptly quit his job and never returned. He has also been spied at his beach house in Oxnard and the Santa Maria Inn in Santa Maria Inn where he has been known to continuously knock and the door and reclines on the bed. The Sheik’s shimmering form has also been seen floating among the costume department at Paramount Studios and roaming the catwalks above Studio Five. Lastly, he has also been sighted near his resting place in the Cathedral Mausoleum at Hollywood Forever Memorial Park.

John Wayne – The old “Duke” himself has been seen on his old yacht, the Wild Goose. When psychics investigated the ghost, they felt that Wayne isn’t “trapped” here, but rather just returns to one of his favorite places.

Orson Welles – Considered to be one of Hollywood’s greatest directors, as well as fine writer, actor, and producer, Welles died of a heart attack in Hollywood, California at age 70 on October 10, 1985. A man who loved to eat, his spirit continues to be seen at Sweet Lady Jane’s Restaurant, known for its great food and exquisite desserts. Both customers and staff have reported seeing Welles’ caped apparition sitting at his favorite table. Additionally, the smell of his favorite brandy and cigars often accompany these sightings.

What Makes a Ghost